Convenience stores have been a lifeline to many during the pandemic – but while they may make life easier, they could also be adding hundreds to your annual grocery spend.

Which? analysed the average price of 48 own-label and branded grocery items at the two largest convenience chains, Tesco Express and Sainsbury’s Local, and compared the costs with the same items at their supermarket counterparts.

Sainsbury’s prices varied the most, with our research showing that you could be paying 9.5% more over the course of a year for exactly the same groceries by shopping at a Sainsbury’s Local rather than a regular Sainsbury’s supermarket.

How much more expensive are convenience stores?

The highest weekly price difference we saw between Sainsbury’s and Sainsbury’s Local during the period of our analysis was a substantial £10.20.

Over a year, the average weekly difference added up to a massive £322, meaning you could potentially save a substantial amount of money by shopping at larger supermarkets.

Tesco’s prices also varied quite significantly, with our basket of groceries costing £279 more, on average, at Tesco Express over the course of a year.

Which groceries are the most expensive at convenience stores?

Our research found several products with steep mark-ups at convenience stores, including Napolina Chopped Tomatoes – which cost a third more at Sainsbury’s Local than at Sainsbury’s supermarkets – and Tesco 0% Fat Greek Style Yogurt, which was on average 23% pricier at Tesco Express than at Tesco.

Below, we reveal the 10 products with the largest proportionate differences in price between convenience stores and supermarkets. We’d recommend picking these up from bigger supermarkets or adding them to your online shopping order where possible (at Sainsburys.co.uk or Tesco.com).

A few of the products we checked weren’t any more expensive at the convenience stores than the supermarkets, so grabbing these from your local store won’t break the bank.

A 500ml bottle of Flash Spray with Bleach was £1 at Tesco Express, Sainsbury’s Local and the supermarkets, while McVitie’s Digestives were, on average, 1p cheaper at the smaller stores. And, while milk was pricier at convenience store branches, this was only by a few pence.

Delivery costs are also higher than for supermarkets, with smaller batches of goods delivered more frequently – and, thanks to city-centre traffic, taking longer to get there.

Another factor that often makes convenience stores pricier to run is their opening hours, with many opening later than larger supermarkets and operating extended Sunday trading hours too. 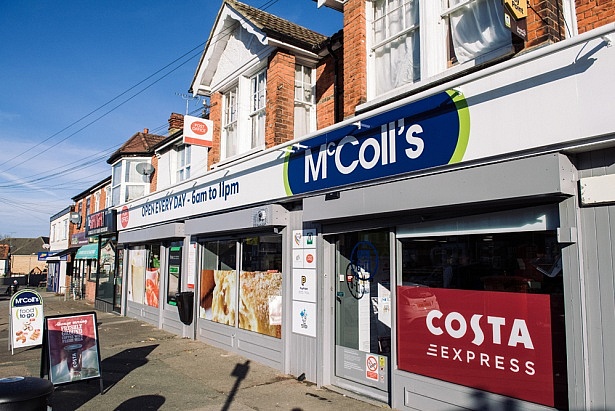 As we saw during the spring 2020 lockdown, many convenience shops are at the mercy of wholesaler costs as well.

While many convenience stores offered vital services for vulnerable or shielding people – including corner shops selling boxes of essentials for home delivery, and shops at petrol stations remaining open despite demand for fuel plummeting – some hit the headlines after accusations of price gouging, with essentials such as hand sanitiser reportedly sold for extortionate prices, and toilet paper costing £1 or more per roll.

The Association of Convenience Stores (ACS) said the issue lay with a handful of rogue businesses trying to profit on the back of wider uncertainty. The ACS also highlighted issues with supply and increased wholesale costs for convenience stores during lockdown, although this mainly impacts smaller independent convenience stores rather than larger chains.

Why do we use convenience stores?

When we asked Which? members why they used convenience stores, 39% said that the sense of community was a factor. One told us they keep going back because ‘the staff are friendly and they know me’.

Others cited the incentive to stick to daily exercise, saying they prefer to walk to their local store rather than drive.

One member said that they like the choice of Asian and Middle Eastern items at their local shops, while another said their local store stocks a good selection of second-hand books.

Why I love my local Londis – Anna Studman, Which? researcher

‘I know it’s more expensive to shop at my local store than at a larger supermarket, but it’s not just about cost for me. My local Londis stocks a range of homemade food cooked by the owners, including curries, chutneys and samosas, which I wouldn’t find at a supermarket.

‘They manage to fit an impressive variety of products in a small space, so while I don’t do big shops there, I can often find everything I need on a quick trip without having to trawl around numerous different aisles.

‘There’s a real sense of community there – the shop has been in the same family since the 1970s – and the owners are always friendly. Plus, I like to be able to support a local business.’

The inconvenient side of convenience

Of course, not everybody loves their local convenience store, and Which? members told us that they had some bugbears with using them. 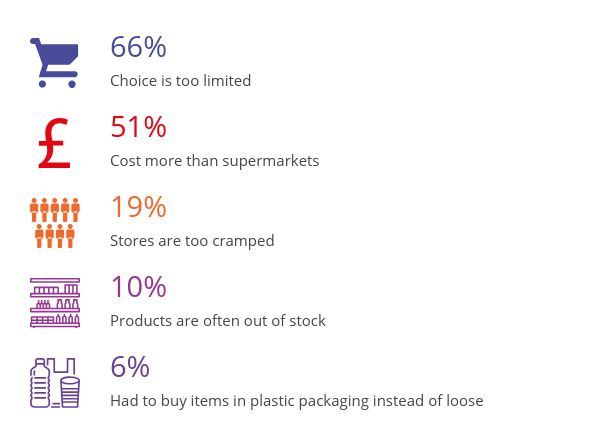 Half (51%) of the people we surveyed said price was their biggest bugbear – which may come as little surprise.

Others felt that store environment, choice and stock issues were the biggest annoyances they encountered, while 6% said that being forced to buy items wrapped in plastic that they would normally buy loose was a major issue.