Coronavirus might be the crisis that’s dominated the headlines for the past year, but we’re aware of a still bigger one looming on the horizon: that of climate change.

When it comes to the tech devices in our homes, their impact is more complex and significant than ever. Where once we might have only needed to think about the power usage of our home PC, we’re now asked to consider the energy use of the network that provides us with content. For example, it takes energy to stream video or games to us – and if we ignore that we’re simply outsourcing our emissions.

Read on as we cut through the tangle of claims and counter-claims to find the best advice on what you should and shouldn’t worry about if you’re trying to make sure your tech setup is friendly to the environment.

1. Replace old tech – but only infrequently

It takes a huge amount of energy to manufacture a computing device. A study by Arizona State University suggests that around two thirds of the total energy use of a laptop over its lifetime happens during the manufacturing process. Additionally, consumer electronics generally need significant quantities of rare earth metals, the extraction and processing of which have numerous detrimental environmental effects.

That means the absolute last thing we should do is start replacing devices more often in a bid to be eco-friendly. It’s better to buy good-quality devices with a reputation for reliability and to replace them as infrequently as possible – Which? expert reviews can help you there.

However, this doesn’t mean we should rule out replacing computers entirely. A common transition to consider is for home desktop users. It has long been a truism that all else being equal you would get a higher specification setup for a similar budget by choosing a desktop PC and monitor over a laptop – but this is becoming less true, and the gap is shrinking.

For all but the most extreme power users – high-end gamers, video editors and designers – a laptop with an external monitor will work just as well as a desktop, and save enormous amounts of energy over its lifecycle.

Consult our expert laptop reviews to see which models will fit perfectly in your home office. If you’re on a budget, you may also want to see our guide on the best laptop deals of 2021.

2. Remember to switch things off

Given the relatively low energy use of most modern computing devices, there is a real risk that they can draw more power when we’re not using them than when we are. When devices are on standby – rather than turned off – they continuously use a small amount of energy, as do things such as laptop chargers if not turned off at the socket.

This effect is magnified by the proliferation of computing devices around our homes – especially as we use some devices such as printers much less than once we did. 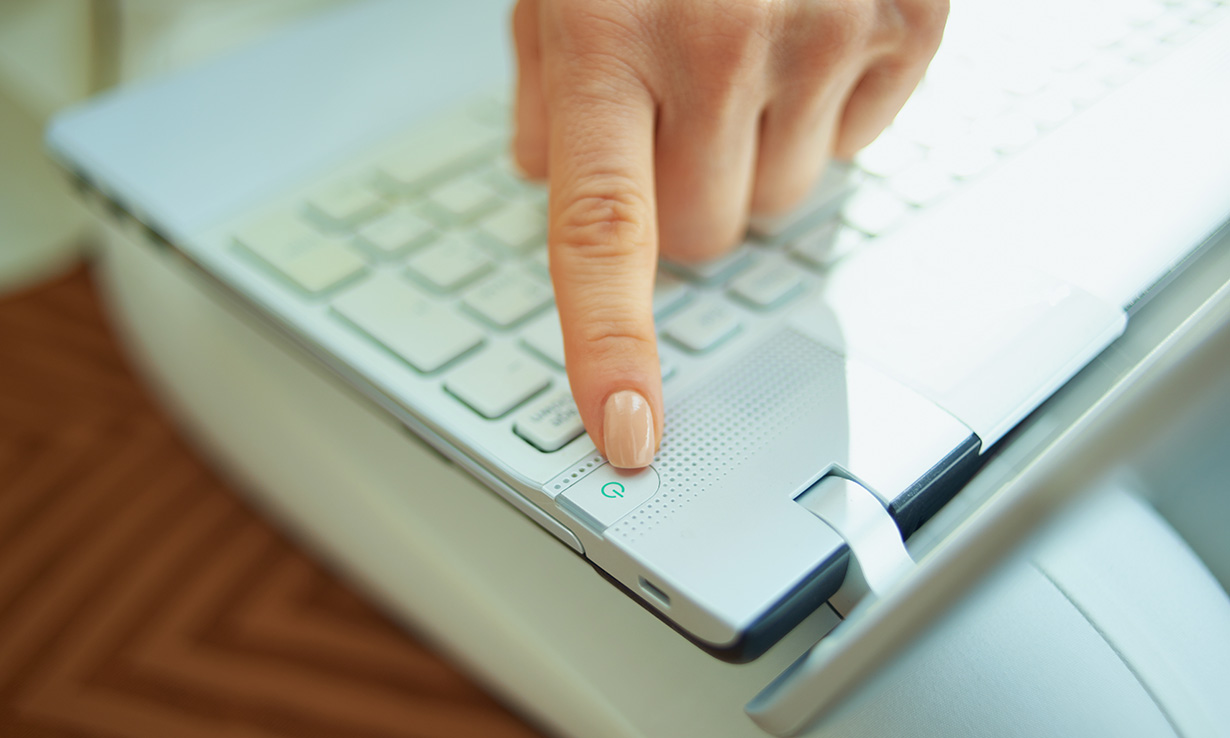 Being on standby might once have meant the illumination of one LED and a very simple ‘wakeup’ circuit. Today, such devices will generally be on your wi-fi network, which increases that background energy use. This means that a printer used for 15 minutes a day – far more than most of us would ever print – will use more energy on standby than when in use. Multiply this across numerous peripherals and it will accumulate, at least to an extent, over the course of a year. 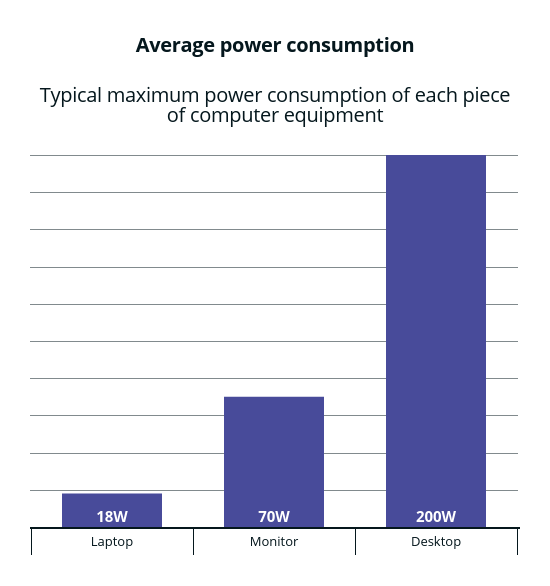 The range of smart home products now includes several options that can help take control of your home’s heating. Perhaps the best known is Google’s Nest (seen below), which replaces your thermostat, but there are other options that are more accessible to people who rent their home and so can’t install permanent upgrades. 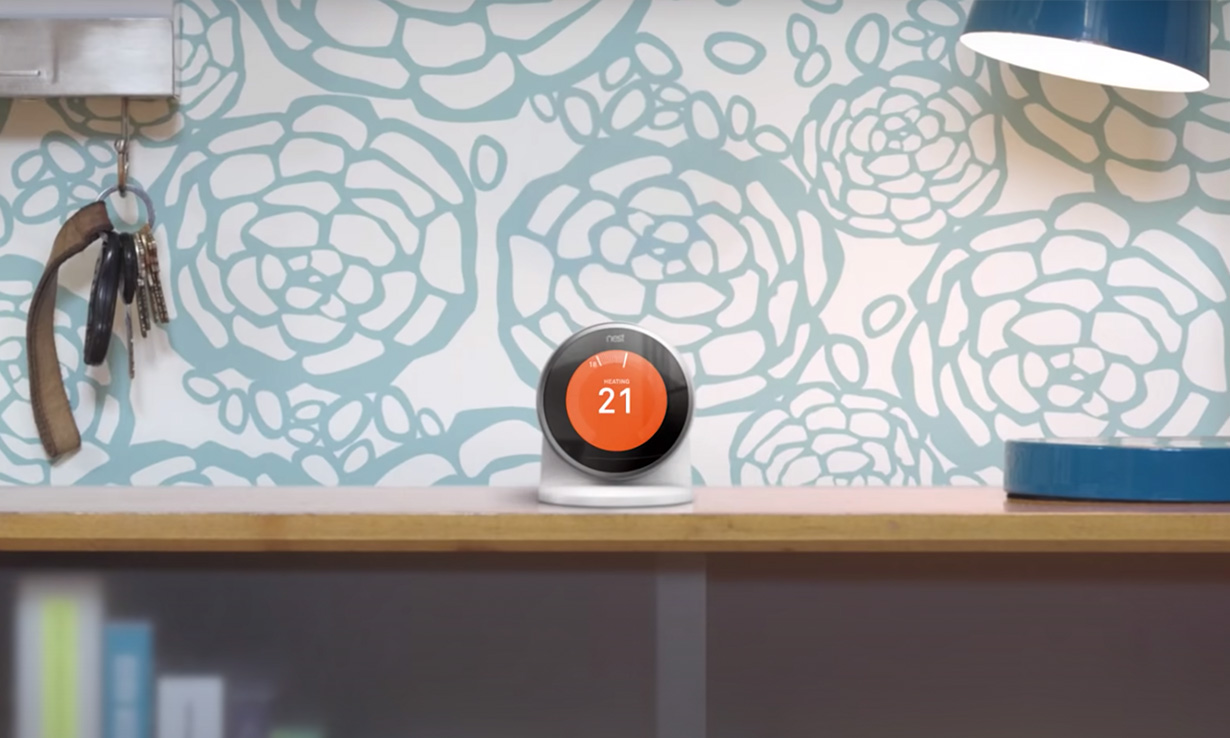 These options all allow similar functions to try to cut your energy use. At the simplest level, they give you finer control over the temperature of your home, and help you track how much energy you use. On top of that, they can learn your routine and find ways to cut your energy use. This could be detecting when you’ve opened a window and turning the heating off for a while.

When we access the internet, electricity is being used to power servers in data centres, to transmit data across the world, and to cool everything along the way.

This leads to some shocking statistics in newspapers or TV news – headlines suggesting it uses more energy to stream a film on a service such as Netflix than it would have to drive to a DVD shop (if they still existed) to rent the film. But this simply isn’t true.

What is true is that streaming works very differently from traditional television. Broadcasting a terrestrial channel over a given area uses the same amount of energy, no matter how many aerials pick up that signal – it uses the same energy if everyone tunes in as if no one does.

Sending a programme over the internet via a streaming service, though, uses additional data and energy for every user that watches the programme – with HD or Ultra HD using more data in turn. This is the single biggest cost for services such as Netflix, and does come with huge energy use.

Where the more alarming headlines go wrong is by using cost-per-megabyte figures from 2015 or even earlier and applying them to the huge volumes of data used by streaming services today. This misses that just as Moore’s law means processors get twice as powerful every 18 to 24 months or so, data transmission gets more efficient too.

So while it’s certainly fair to say streaming is less environmentally friendly than old-school broadcasting, rumours of its impact are greatly exaggerated, and streaming can be a guilt-free pastime.

5. Don’t panic – computers use much less power than they once did

For most of us, our home computing setups look radically different today than they did 10 or 20 years ago. The majority of households with a computer in 2000 would have owned a desktop, coupled with a bulky CRT monitor. Today, the overwhelming majority of home computers are laptops.

Laptops use far less energy than both old desktops or modern ones. This can be simply calculated by looking at desktop PCs’ power units – 200W would be standard, with 300W or 400W not unusual for a high-end system.

Most laptops, meanwhile, will run and charge on 18W. So a system used for the same amount of time each day could be expected to use up to 90% less energy over the course of the day (in reality, the saving is less). Advancements in processing power especially, and home computing generally, have made it easier to have much more powerful machines using much less energy.

Modern flatscreen monitors draw more power than this, especially if they’re large, but are also intrinsically more energy-efficient than their forebears. Even large flatscreens typically run at around 70W or so. 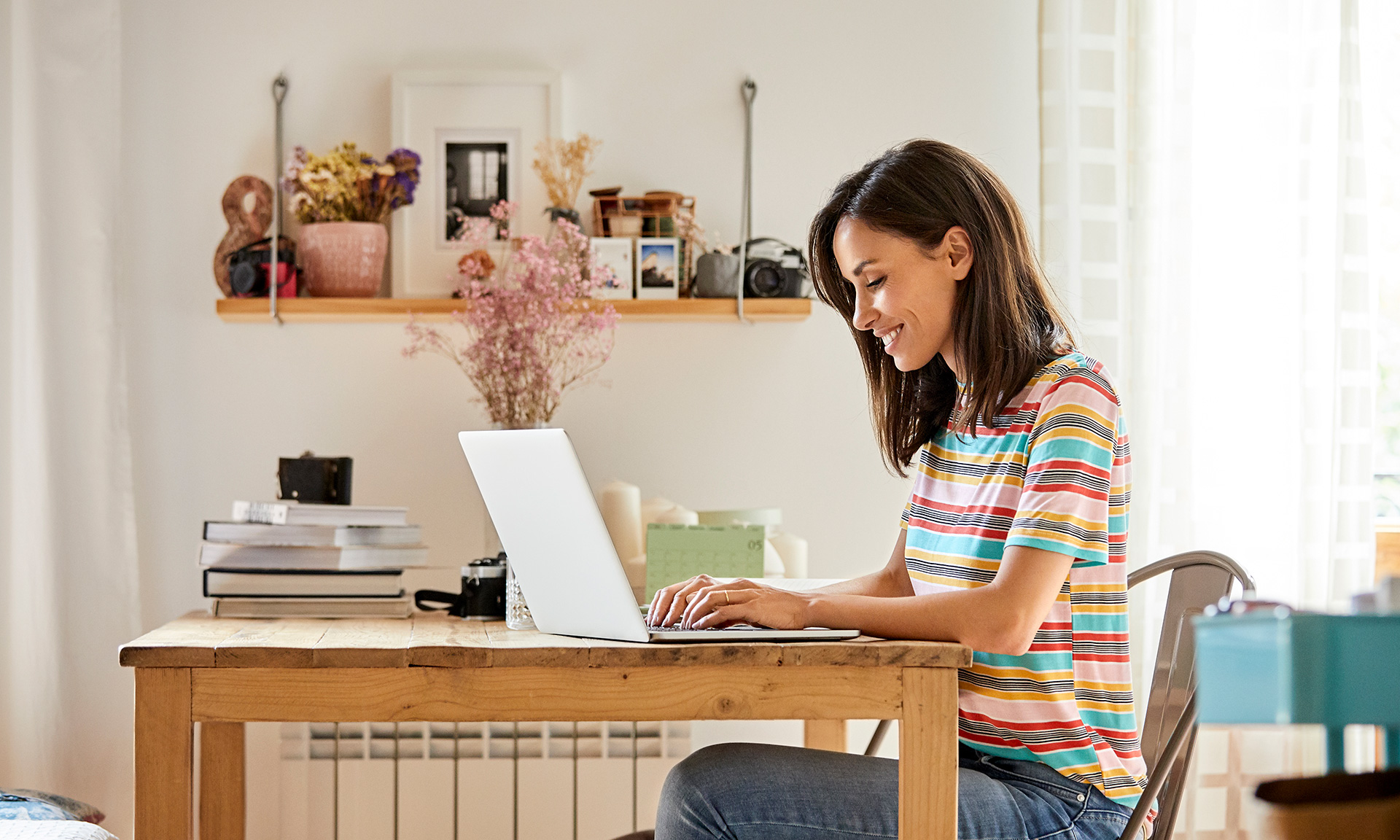 6. Don’t forget about the space around your computer

The reality of domestic energy use is that heating – which includes hot water but not heat used for cooking – accounts for almost 80% of the energy use of European homes. In other terms, heat alone accounted for four times the energy of absolutely everything else combined.

For someone working alone at home, it’s far better to heat one room than several, and a small room than a large one. Built-in home heating is generally more energy-efficient than ad-hoc heaters, but a small fan heater could prove more economical (and thus use less energy) if they allow for heating a smaller space.

The ultimate green tech energy trick, though, is simpler still – when the weather isn’t too bad, and if we don’t feel the cold too much, jumpers and blankets are great for cutting down heating bills – and will make a far bigger difference to the real total energy use of our home tech setup than almost any previous step named here.

Our extensive guide on working from home highlights some essential tech for remote working. We’ve also got advice on ergonomic chairs and standing desks. 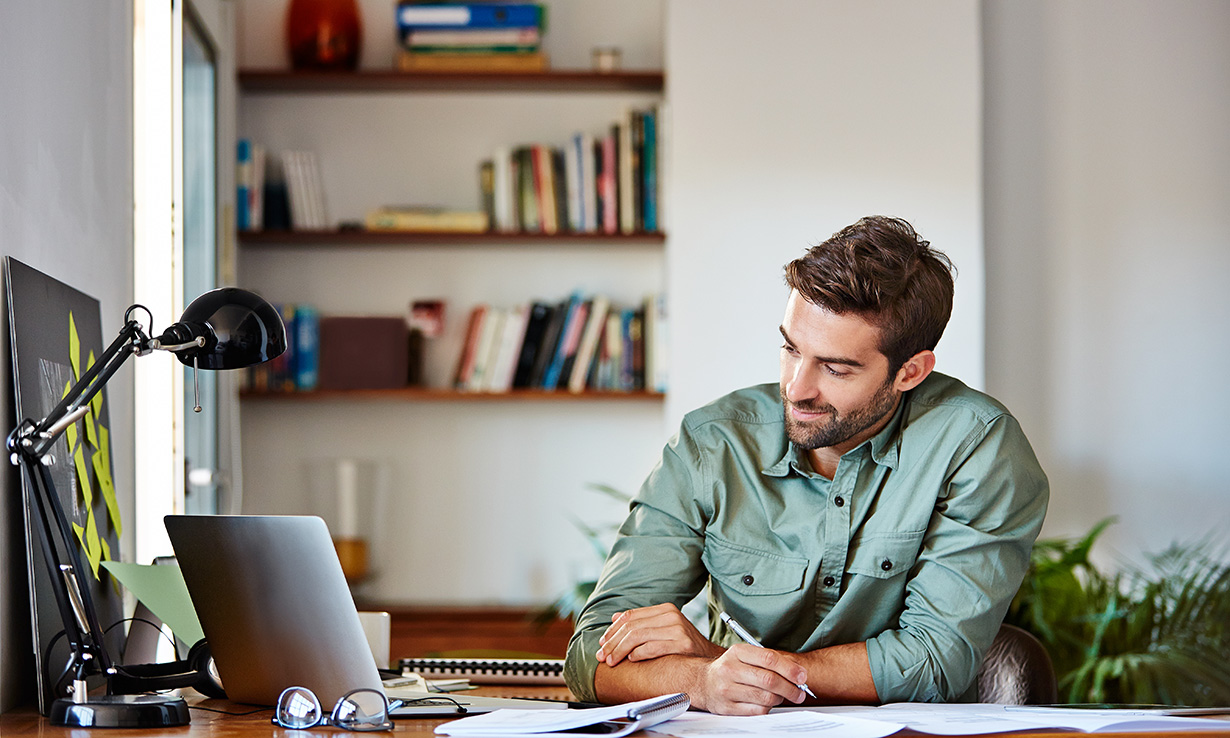 There’s no reason that a well-chosen new laptop shouldn’t be expected to last five to eight years or longer, with monitors and similar peripherals also lasting at least as long.

We can’t say the same, though, for mobile phones: here, almost every factor pushes towards replacing our devices on a much more frequent cycle. The shift away from replaceable batteries in mobile phones similarly pushes us towards replacement – battery life for a moderate to heavy phone user will probably be quite seriously impaired after two years or so. When possible, paying a professional to replace the battery of a phone that’s otherwise in good working order is a good green option here.

But for Android phones in particular there’s an extra and particularly annoying restriction – many handsets become unsupported far too quickly, meaning they can no longer receive crucial security updates.

Google, which makes the Android operating system but doesn’t manufacture most Android phones, has said it’s trying to guarantee new phones will be compatible with Android updates for at least four years – but in practice this will be slow to roll out, assuming it ever does.

This should be seen as an unacceptable choice: consumers shouldn’t have to pick between continuing on an insecure device or being forced into a new (and bad for the planet) handset purchase. Sadly, for the moment, that’s the choice they face.

Find out if the phone you own is still supported by crucial updates with the Which? phone support calculator.

If you have old devices lying around that you no longer use, there are plenty of ways to get rid of them without committing them to landfill.

For starters, if the device is still in good working order, you might want to see if any friends or relatives could put it to good use. Just remember to wipe your own personal data off the device before handing it over. 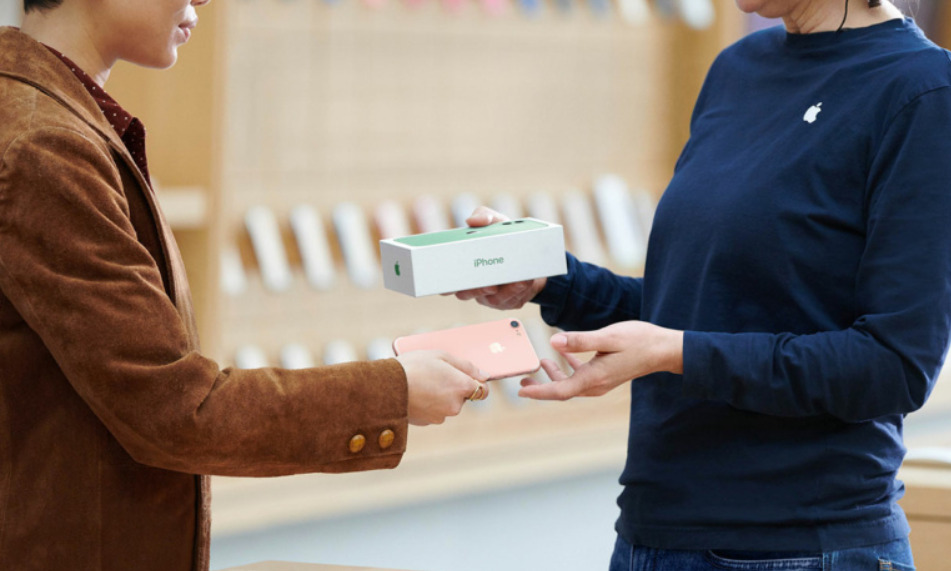 Alternatively, there are several websites dedicated to buying used tech products such as smartphones, laptops and tablets. Some of the more popular options include Apple, Carphone Warehouse, Currys PC World and Three.

For more tips on dealing with your unused gadgets, see our guide on what to do with unused tech.