Last month, Housing Secretary Robert Jenrick announced that EWS1 assessments – the fire safety checks previously required for all flats – would no longer be needed for buildings under 18 metres in height.

Despite this, a dozen banks and building societies have told Which? they are still waiting for a change in guidance from the Royal Institution of Chartered Surveyors (RICS) – the body that creates standards and regulations for surveyors – before they can follow the government’s new advice.

However, when we shared this with RICS, it told us lenders didn’t need to wait for a change to its guidance for them to align with the government’s announcement.

Here, we look at the effects of the cladding scandal on the property market, and what that means for the hundreds of thousands trapped in homes they can’t sell.

Will lenders change their EWS1 policies?

The government’s July announcement – based on an expert statement on fire safety – was meant to remove the EWS1 hurdle for properties in buildings under 18 metres. But our research suggests it is yet to have an impact.

Removing the need for EWS1s would be significant, as acquiring one and getting a good rating has been a key stumbling block for leaseholders trying to sell.

While they are not a legal requirement for sellers, mortgage lenders require a building to pass an EWS1 fire safety inspection before they will lend to new buyers.

When Jenrick made the announcement last month, he said ‘all major lenders’ welcomed the new advice, suggesting lenders would now stop asking for EWS1s for properties in smaller buildings. However, more than a dozen banks and building societies we spoke to said they wouldn’t be changing their policies yet.

We contacted 21 banks and building societies, covering all of the UK’s biggest mortgage lenders. Only 12 responded to our questions, with many saying they do welcome the government’s announcement but are waiting for updated guidance from RICS before changing their policies.

RICS told Which? that it is urgently discussing the expert statement that prompted the government’s announcement with lenders, valuers and fire safety assessors to review its impact on its guidance.

However, it also stated lenders are able to follow the new government guidance without waiting for it to finish this work.

RICS told Which?: ‘Lenders do not need to wait on changes to RICS Guidance to implement the changes of the government announcement. The RICS Guidance Note already makes allowances for this under section 2.1 which allows lenders to provide valuers with special instructions.’

Some of the biggest lenders in the country – including Barclays and Natwest – didn’t respond to our requests for comment. In general, lenders were reluctant to go into detail on specific policies around EWS1 assessments, remortgaging, and the impact of expensive interim measures on leaseholders’ finances.

All of this suggests that the July announcement will have little short-term effect on leaseholders’ ability to move, even if they do live in shorter blocks.

Will estate agents need an EWS1?

It’s not just lenders that have been asking leaseholders for EWS1s. Some 60% of the 185 estate agents we surveyed via NAEA Propertymark in May said they wouldn’t put a flat on the market if it didn’t have an EWS1 in place already.

It’s unclear whether this would still be the case now, however. Timothy Douglas, the group’s policy and campaigns manager, said Propertymark had expected lenders to be operating in line with the government’s latest announcement.

‘If further clarity is needed then we urge the UK government to provide additional detailed guidance and, if need be, legislate to ensure consumers are treated fairly and there is a consistent approach for industry,’ he said.

Since flats are often at the beginning of property chains, a flat sale falling through could have a knock-on effect on larger properties being sold, too. One in eight estate agents surveyed said they’d witnessed a chain collapse due to EWS1-related issues.

What does the government say?

The Ministry of Housing, Communities and Local Government (MHCLG) told Which?: ‘The view from the independent experts is that there is no evidence of a systemic risk of fire in blocks of flats and we continue to work closely with the industry and the RICS to correct the present market failure and support leaseholders to sell their properties, should they wish to do so.

‘In line with expert advice, we’ve set out that EWS1 forms should not be requested for buildings below 18 metres – we urge the market to follow this approach and ensure relevant guidance is updated in light of the latest evidence.’

It also said flats under 18 metres that already have EWS1s should have them reviewed to ensure any resulting expensive interim measures or bills are proportionate.

This is hugely important to affected leaseholders in buildings under 18 metres, many of whom are already facing financial ruin due to waking watches, insurance increases and remediation bills brought on by EWS1 inspections the government now says were not needed.

Recent Which? research revealed the shocking scale of the mental health crisis among affected leaseholders, with the majority of 1,700 leaseholders we surveyed saying the cladding scandal had negatively impacted their mental health.

One leaseholder, Rhian, described the situation as ‘absolutely harrowing’.

‘At the moment we’re just stuck in limbo,’ she said. ‘We don’t know what’s going to happen.’

Rhian is one of many leaseholders we’ve spoken to who have had to put their lives on hold due to building-safety-related bills. She has delayed her wedding twice now: once because of Covid, and once because of the financial pressure of the cladding crisis.

Here’s what she told us about living with building safety issues when we visited her at her home: 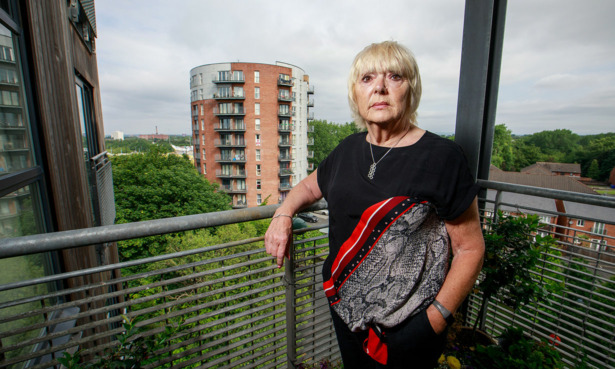 This property market stalemate has real consequences for leaseholders like Val Peets, who first tried to sell her flat more than a year ago.

Val retired in February 2020 after working for the NHS for nearly 20 years. She lives in a two-bed flat in Manchester.

‘My retirement plan was to sell my apartment, get rid of the mortgage and buy something that was mortgage-free,’ she says. That plan came undone when the building failed a fire safety inspection.

Val couldn’t sell the apartment and her monthly service charge skyrocketed to pay for increased insurance costs, so she was forced to come out of retirement.

‘I realised I couldn’t afford to live, so I’ve had to go back to the NHS. I’m now working more hours than I did before.’

Val sums up the unfairness with an analogy: ‘If you buy a car or a washing machine and it’s not fit for purpose, you can go back to the manufacturer. But you buy [a flat] and that’s it, it seems you’re stuck with it.’

At work, Val helps people through addiction. It’s stressful work compounded by her building safety burden. ‘Nobody’s realising the impact on peoples’ mental and physical health. I’ve recently been diagnosed with Meniere’s disease. When I looked that up, a lot of that can be down to stress.’

Val believes her building is likely a lot safer than what inspectors have suggested. She worries that different stakeholders are being too risk-averse without considering the costs that places on leaseholders.

‘Grenfell was terrible. It was so horrific I can’t begin to describe it. But I think now we’ve gone to the other extreme.’

‘I haven’t got years to sit here and wait for it to resolve itself. If I was in my twenties, thirties or forties I could say “well, OK. I’ll just write five years of my life off and do the best I can”. But when you’re older you can’t do that. I don’t have time to play with. I want to retire and I want a stress-free life.’