There are huge gaps in how transparent savings providers are when it comes to reporting their environmental impact and policies, Which? can reveal.

We asked experts Ethical Consumer to rate the sustainability of 18 banks and building societies that provide savings accounts.

Each was given a rating out of 100, based on publicly available information about how they use savers’ deposits, the environmental impact of the industries they fund, and what the bank or building society was doing to reduce this.

The 81-point gap between the top and bottom-rated providers suggests that savers could reduce their own environmental impact by moving their money to a more sustainable provider.

Here, Which? reveals which providers received the top scores, and whether you need to sacrifice a decent interest rate to save with them.

The most sustainable providers of savings accounts

The score for each provider was based on the publicly available information that could be found in four categories, which looked at the following questions:

The table below shows how each of the 18 banks and building societies fared:

The top performing providers combined transparency about where savers’ money goes, with policies to reduce that money’s impact on the environment.

Savers with top-rated Triodos Bank can see on its website what it will and won’t lend to, plus its full list of UK and worldwide loans.

Ecology Building Society and Nationwide, in joint second place, both benefit from being building societies.

Building societies must hold at least 75% of their assets in residential property, meaning they’re less likely to be lending to unsustainable firms. Both Ecology and Nationwide report the carbon emissions of the properties they finance, and work with customers to reduce those emissions.

High street banks scored well for reporting their environmental impacts, but rarely included outright bans on investments in fossil fuels. Most have committed to reducing their emissions to net zero by 2050 – but for some savers, that’s won’t be soon enough.

At the bottom of the table were many of the newer challenger banks. While their impact may be less than some of the bigger banks, the scarcity of published information about their ethical policies or actual lending has harmed their scores.

Too many challenges for sustainable savers

Points were only awarded if the researchers could find the information in publicly available resources.

Providers may be doing positive work which is beneficial to the environment, but if researchers couldn’t find it, they weren’t awarded points. In some cases, initiatives did not fit into researchers’ scoring categories.

A survey of 1,071 Which? members in May found 28% care about the values of the company their savings are invested in.

However, 69% said they would not know how to find information about a bank’s green credentials, making it difficult to compare providers.

As yet, there is no government-backed label to prove whether or not a savings account could be classed as ‘sustainable’. As a result, anyone who wants to find a home for their money that matches their morals is left having to look through provider’s websites and annual reports.

These are often include technical terms and jargon, and still rarely give the average saver straightforward answers to what their money is being used for.

At Which?, we’ve found lack of transparency to be an issue across other financial products – such as pensions and investments – as well as a range of other household products.

Do you have to sacrifice interest to be sustainable?

With savings interest rates still not recovered following the huge drop caused by the coronavirus crisis last year, it would be understandable if you didn’t want to sacrifice the little interest you have in order to save with a more sustainable provider.

The good news is you don’t have to.

While the savings accounts from the more sustainable providers rarely offer the top rates, they’re not at the bottom either.

When we looked at the featured providers’ rates for restriction-free instant-access savings accounts and cash Isas, we found that the big high street banks offered the lowest rates – commonly just 0.01% AER.

As for the rest of the providers – sustainable or not – the rates on offer were pretty similar.

What’s more, as rates remain so low, it’s worth factoring in how much interest you’d actually stand to lose if you opted for a provider based on sustainability rather than the highest interest rate. It may be that, over the course of a year, you’d only earn a couple of pounds less – which might just help save the planet.

What do the banks say?

We approached all 18 featured savings providers with our research.

Some felt it did not fairly represent their policies, including Aldermore, Al Rayan Bank, Barclays and The Co-operative Bank.

Other providers flagged imminent improvements to their environmental reporting, including new products.

You can read providers’ responses here: 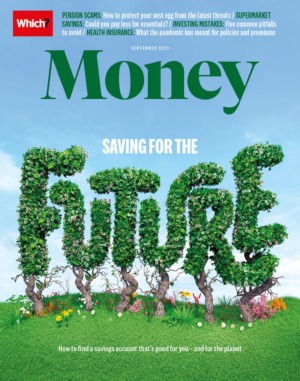