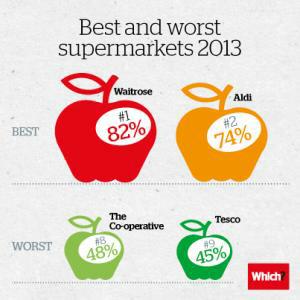 Waitrose has been rated as the best supermarket by Which? members for the fourth year in a row – while Tesco ranked lowest.

John Lewis-owned Waitrose topped our survey of over 11,000 Which? members with a customer score of 82%, receiving five-star ratings for its customer service and the quality of its fresh produce. Aldi came second with a score of 74%, and Lidl was third with 69%.

At the other end of the scale, Tesco is the lowest-rated of the nine supermarkets with 45%, getting poor scores in many areas.

When it comes to online supermarket shopping, Waitrose Deliver tops the table jointly with Ocado with 80%.

You can see full results – including which company ranked lowest – in our full review supermarkets compared.

In our survey 91% of Which? members believed that Waitrose cares about its customers, while 90% thought that it’s trustworthy and 77% associated it with healthy eating – all higher than for any other supermarket.

‘I always leave our Waitrose store with a good feeling,’ said one member. ‘It has high-quality products, a large range of groceries, and friendly and helpful staff. The store is clean and attractive and the location is convenient.’

‘It’s too keen on profits and not keen enough on service.’

– one Which? members’ view on Tesco

Which? members were overall less glowing in their appraisal of Tesco, and rated it poorly in most areas including pricing, fresh produce quality and customer service.

‘We are very aware that our shopping is getting progressively more expensive, so you really need to be watching what you buy to ensure you get the best value,’ said one Tesco shopper.

Several of you find the experience of shopping in Tesco ‘unpleasant’. ‘Its stores tend to have surly staff and are littered with boxes,’ said one Which? member. Tesco is also considered the supermarket which cares the least about its customers and is least trustworthy. ‘It’s too keen on profits and not keen enough on service,’ one member told us.

Disappointingly for a supermarket that aims to beat Asda, Sainsbury’s and Morrisons on price, only 27% of members felt that Tesco is helping to ease the strain on their food budget. No other store in our survey is as poorly-rated in this respect. ‘Tesco is lagging behind Asda for price,’ said one member.

The full list of best and worst supermarkets ranked in our survey are as follows.

When it comes to bagging the best deal, Which? members told us that they want supermarkets to keep special offers simple – 55% said straight discounts were their preferred type of special offer, well ahead of other offers such as petrol vouchers (16%) or buy-one-get-one-free deals (11%).

They also said that their biggest bugbear with supermarkets is not being able to compare products due to different units being used – such as £2 per kilo or £1.20 per item – or unit prices not being used at all.

Which? is campaigning for clearer unit pricing, so if you’d like to see food consistently priced to make it easier to compare, pledge your support for our unit pricing campaign.

How we rate supermarkets

Our supermarket survey asked 11,492 Which? members in October 2012 about the supermarkets they’ve shopped at over the last six months. Each was rated for customer service, filling your trolley, fresh produce quality, pricing and store environment.

The ‘filling your trolley’ rating covered product range, how easy it is to find items and how likely they are to be in stock. While the pricing rating covers value for money and special offers.

The overall customer score is a combination of customer satisfaction and the likelihood they’d recommend it to a friend.