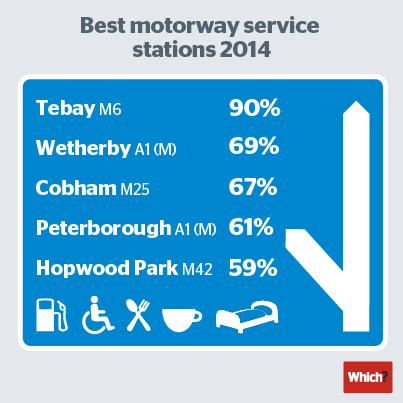 Tebay Services has come top of a Which? survey to find the best UK motorway service stations. The family-run business just off the M6 in Cumbria was the only location to achieve maximum five-star ratings.

Tebay, run by Westmorland, headed a list of the 26 locations most visited by Which? members. Charnock Richard services, owned by Welcome Break, was bottom of the table, based on results of a poll covering 3,039 recent experiences of service stations.

In the same survey, Extra beat Moto, Roadchef and Welcome Break in the battle of the four major motorway service station brands.

You can see how each of the 26 featured service stations and four main brands performed in the full tables of results for the motorway services survey. These include ratings for food quality, toilet cleanliness and value for money.

The customer scores for individual motorway services range from 90% for the best to 39% for the worst of the 26 locations in the survey, which was carried out for the July 2014 issue of Which? Travel.

With an impressive customer score of 90%, Tebay Services beat the closest competition by 21 percentage points. It also received five stars for toilet cleanliness and food quality.

It is slightly different from usual service stations as it sells home-grown and local produce in its farm shop and restaurant.

The rest of the top five individual motorway services were Wetherby on the A1 (M), Cobham on the M25, Peterborough on the A1 (M), and Hopwood Park on the M42 near Birmingham.

With a customer score of 60%, Extra topped the table of the main four motorway service station brands. This relative newcomer adopts a different approach to other motorway services that control prices at their own food and drink outlets or franchises they run.

Instead, it leases space to food and drink retailers that set their own prices. This aims to increase competition.

Extra was the only brand to receive four stars for toilet cleanliness, and it owns two of the top five individual motorway services in our survey.

Save money at motorway services

Which? researchers also compared the cost of food and drink at motorway service stations with those at the closest supermarket, and found that travellers could slash their spending by nearly half by detouring to the supermarket.

Which? editor Richard Headland, said: “Our research shows there’s a big difference in the standards you can expect when you pull into a motorway service station. We also found that you can save a packet if you plan ahead and find cheaper alternatives along the route.”

You can see more tips on how to make your money go further when stopping off on motorway journeys in our review of motorway services.