Glass oven doors can explode without warning, sending glass fragments flying across your kitchen – or into your dinner.

We investigated the problem of exploding oven doors after receiving a consistent trickle of reports on the issue from Which? members. When we asked members to come forward with their stories, we ended up with more than 70 examples, across all the major brands, of doors on ovens and cookers that have unexpectedly exploded.

Not only is this a distressing and unsettling experience to have, we also heard plenty of horror stories from members who had frustrating interactions with manufacturers when trying to get their ovens fixed or replaced.

So what’s going on? Watch our video below for a quick guide to exploding ovens, then read on for more on why oven doors can explode, how to minimize the risk, and your rights if it does happen to you.

Cases of exploding oven doors are rare, but if yours does explode, you probably won’t see it coming. There was no particular rhyme or reason as to when – or how – oven doors exploded in the cases we heard of from members. It could be either the inner or outer glass panels that shattered. Sometimes it happened when the oven was on, or running a pyrolytic self-cleaning cycle. Other times the oven was cool and not in use.

We spoke to a variety of experts to uncover the science behind exploding oven doors, including manufacturers, oven engineers and academic glass experts, and it turns out that this explosive problem is all down to the type of glass used.

The glass in oven doors has been strengthened to make it more resistant to heat and mechanical stress, and less likely to shatter under these conditions than ordinary glass. This is essential for ovens and cookers, which have to cope with extremes of temperature and daily use.

Tempered glass is thermally strengthened by heating it to more than 600°C, followed by rapid cooling. The outer layer of the glass cools more quickly, creating a compressed outer layer. This works to protect the inner part of the glass, which cools more slowly. 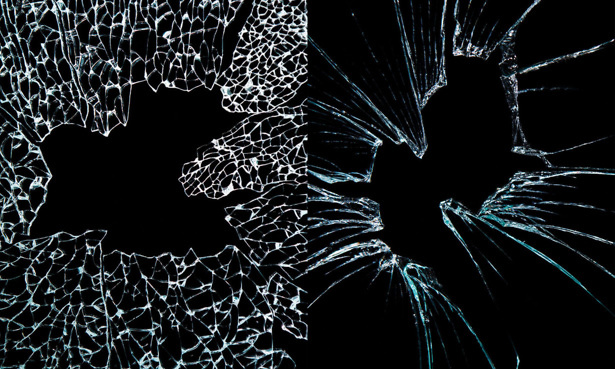 However, tempered glass is still brittle and can shatter. When it does, it tends to do so suddenly and violently. While this can be extremely alarming, tempered glass shatters into smaller, blunter fragments (image above, left) than ordinary glass (above, right). These are much less likely to cause a cut, hence why it has earned the nickname ‘safety glass’.

There are lots of possible reasons why the tempered glass in an oven door might shatter, but it’s often tricky to pin down exactly why it’s happened. This is partly because the glass failure may happen a long time after the initial damage – a knock, scratch or accidental bash – occurred.

3 ways you may be damaging your oven

As we investigated the possible reasons for why oven doors can explode, one thing become clear. You could be inadvertently damaging the glass when you use or clean your oven. 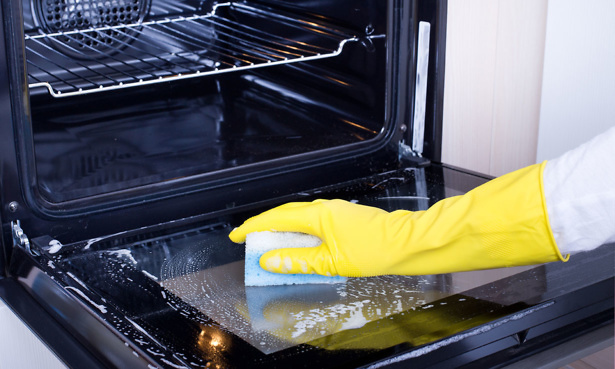 1. Aggressive cleaning When we surveyed Which? members, nearly two thirds said they used some kind of scourer to clean their oven door. It’s tempting to get tough when you’ve got stubborn cooking grime to banish, but it’s not advisable.

Any kind of scourer can introduce tiny scratches in the surface of the glass that leave it vulnerable to shattering, a warning you’ll probably find buried in your oven’s instruction manual. It’s better to use a soft sponge, and try to clear up spills soon after they happen so they don’t need scrubbing. 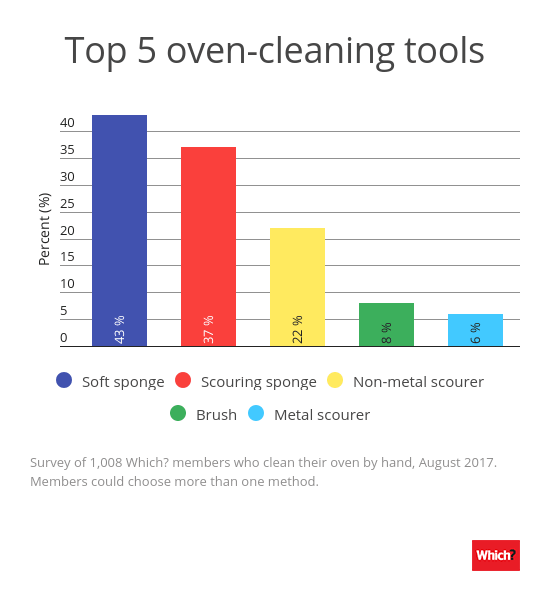 2. Avoid physical impact It’s tempting to use an oven door as a place to rest trays or dishes when taking things in and out of the oven. But plonking a dish down – especially a hot one – doesn’t do the glass any good. Equally, avoid slamming the door, kicking it closed with your foot or letting it hit the metal shelves as it closes.

If you’re looking to buy a new oven, it’s worth considering telescopic shelves. These can be pulled right out without tipping, so it’s easier to get dishes in and out of the oven. 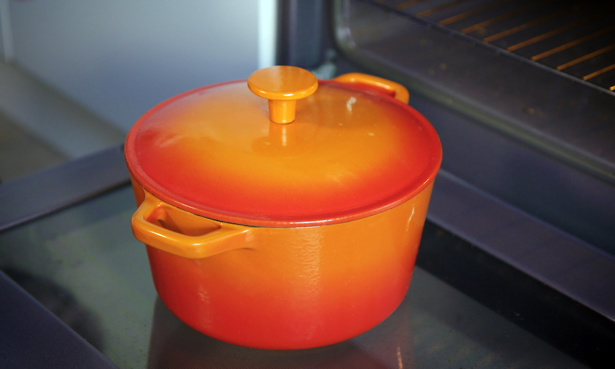 3. Contrasting temperature Different materials expand and contract at different rates in response to temperature changes. So anything touching the glass as it heats and cools can encourage weaknesses to develop. Make sure the dish you’re cooking isn’t in contact with the glass door, clean off cooking grime from the glass, and avoid hanging wet towels on the handle to dry.

Has the damage already been done?

While looking after your oven will stand you in good stead to avoid a shattering experience, there are other factors that are less easy to control:

Another possible factor is the rise of full-glass oven doors. Older designs had a small glass window in the door, or no glass at all, but in recent years full or nearly full-sized glass oven doors have become fashionable. This means there’s a greater surface area with potential for damage. 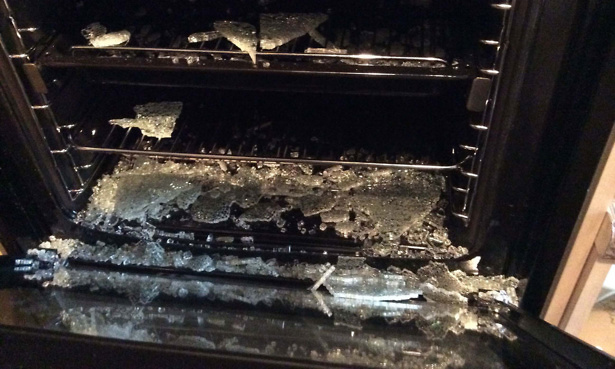 You could do everything right with your oven’s glass and there’s still no guarantee it won’t explode due to inadvertent damage or natural imperfections that aren’t your fault. As these cases aren’t always clear-cut, you’d hope manufacturers would be sympathetic to your cause. Unfortunately, Which? members who told us about their shattered doors encountered a range of responses – from helpful to downright indifferent.

If your oven door shatters and your appliance is out of warranty, you may be in for a long wait and a costly repair. While some of our members had a speedy and sympathetic response, others were left without an oven for weeks, and ended up having to foot costly repair bills of more than £200.

Best oven brands – find out which brands came out on top for reliability and customer satisfaction in 2017.

When we asked manufacturers to explain their policy on exploding ovens, most reiterated that safety was their number-one priority and that cases of exploding ovens were rare and dealt with on a case-by-case basis.

Smeg told us it had recently changed its policy. The brand now offers a repair or replacement in 95% of cases, even when out of warranty, subject to individual circumstances. We’d like to see more manufacturers taking this approach and giving customers the benefit of the doubt. 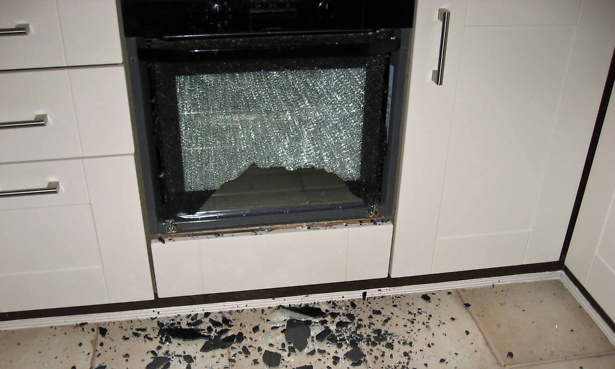 What to do if your oven door explodes

Free glass replacement under warranty isn’t usually a problem. But warranties usually last only one or two years, when your oven should last 10 or more.

You could be entitled to a refund, repair or replacement from the retailer, but if your oven is more than six months old the onus will probably be on you to prove a fault was present at the time of purchase.

If the worst happens, here are some steps you can take to get the best results:

For guidance on buying the best new oven or cooker, use our built-in oven reviews, range cooker reviews and freestanding cooker reviews.

Kellogg’s Crunchy Nut beaten by supermarket own label in Which? taste test

One small step: Are your pants bad for the planet?