Apple announced two versions of the new Apple Watch Series 3 at its annual launch event on Tuesday, where it also unveiled new iPhones. One has built-in LTE – cellular connectivity that will let you make or receive calls and notifications without your iPhone nearby – and there is also a non-LTE version.

As well as LTE, there are also plenty of familiar features, including a rectangular design, a built-in heart-rate monitor and GPS, and waterproofing for swimming or water sports. So what else is new? We dig into the key features of the Watch Series 3, and take a look at watchOS 4.

Apple smartwatch reviews – find out how the previous iterations performed in our tough testing. 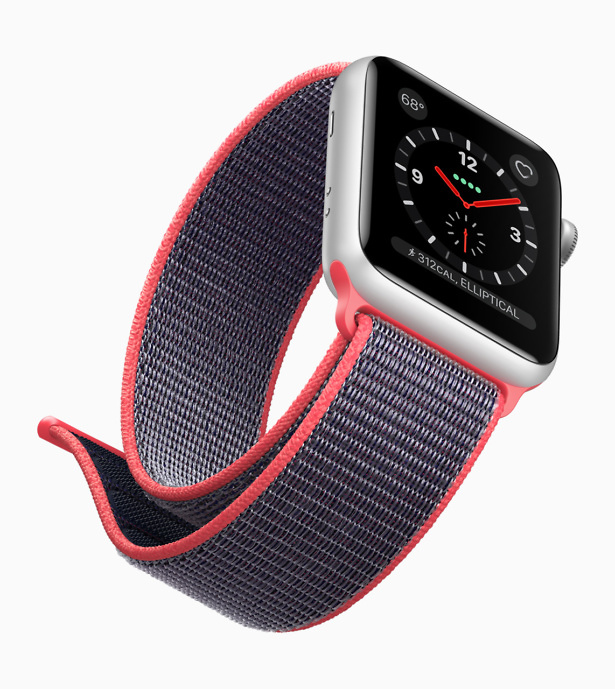 Design – Apple has gone for the ‘if it ain’t broke, don’t fix it’ approach to the Watch Series 3 design. It looks largely the same as previous iterations with a rectangular watch face and bezel, and we suspect it will be offered in the normal 38mm and 42mm screen sizes (although that hasn’t been confirmed). The LTE version will have a red accent on the watch dial.

There are a few new finishes and bands to pick from, including gold aluminium and grey ceramic-finish bezels. There will be a new sport loop band too. As with previous models, there’s the usual Nike and Hermes design pairings.

Processor – the Apple Watch Series 3 has a new dual-core S3 processor, which Apple says should make it up to 70% faster than the previous iterations. We’ll put this to the test when we get it to our Test Labs. The zippier processor is powerful enough to fully support Siri, so you can ask the voice assistant questions and it can recite the answer to you.

LTE – recent leaks were correct in saying the Apple Watch Series 3 would have built-in LTE, which means it has cellular connectivity independent of your iPhone. This is the most exciting new feature on a watch that otherwise looks largely similar to what came before, and one that people have been wanting for some time – it means you can use your watch to stay connected even when you don’t have your phone with you.

We now know exactly how this will work. The LTE version of the Watch Series 3 will come with a built-in electronic Sim card that’s even smaller than a nano Sim, and will have the same phone number as your paired iPhone. Cleverly, the display works as the antenna to pick up the signal for you to make and receive calls, and send messages or other notifications, even while unpaired from your iPhone. You’ll also be able to use maps and location tracking via Find My Friends, which will switch over to your watch.

Apple has also added Apple Music to the Series 3, so you can stream songs or radio stations via your AirPods while out and about without your iPhone.

Battery life – Apple claims the Watch Series 3 will still give you a full 18 hours of battery life, despite having a more powerful processor and built-in LTE. This is the same claim as for the Apple Watch Series 1 and Series 2, which both exceeded the 18-hour battery life claim during our testing. We’ll put it to the test later this year.

The AirPower wireless charger will launch next year, and you’ll be able to use it to wirelessly charge the Watch Series 3.

Price and availability – the non-LTE version of the Apple Watch Series 3 will be priced from £329, while the LTE-enabled version will be available from £399. In the UK, Apple has paired with EE as the network provider for the watch. Both versions will be available to order from 15 September 2017 and will be available in stores from 22 September.

If you aren’t bothered by built-in LTE the good news is that the starting price of the Series 1 will be lowered to £249.

The beta version of watchOS 4 has been around for some time, but Apple has announced that it will be available for all Watch users from 19 September 2017. There are more health-related features with a particular focus on heart-rate tracking. There’s also a redesigned workout app with high-intensity interval training (HIIT) features, plus new metrics for swimmers and the ability to use NFC to connect your watch to your gym equipment.

You can now view your heart rate on the face of the watch, so you can see your beats at a glance while running or working out. There will be more data about your heart rate than before, including analysis of your resting beats and recovery heart rate after a workout. You’ll also be alerted to abnormalities in your heart rate, such as a particularly high one when you’re not exercising.

Apple has also teamed up with Stanford Medicine on the Apple Heart Study, which is examining how the built-in heart-rate sensor can be used for tracking heart rhythm and helping to diagnose heart arrhythmia.

For more on the new iPhone launches and other products announced, read our full report of the Apple event.