Just under two million people have been told by the government they will no longer be able to collect their state pension and other benefits using a Post Office Card Account, and will need to have a bank account to receive their benefits.

Post Office Card Accounts were introduced in 2003 to replace the old paper state pension ‘order books’. The accounts come with no charges or credit checks, and no overdrafts, making them useful for people with poor credit histories. You can also get a second card, which means people with disabilities or the elderly can get someone else to collect their money for them.

In 2014, when the government renewed a £250m contract with the Post Office, 2.5 million people had one of these accounts. At the time, the government stated that ‘over half of account users are pensioners and many rely on someone else to collect their payments for them.’ The Post Office told Which? Money the number of users in 2017 has fallen to under two million.

The Department for Work and Pensions has been contacting account users since last year, urging them to use a bank, building society or credit union account instead to have their benefits and pension paid. According to a disabilities group, Equal Lives, this will happen in stages until March 2018.

A free newsletter from Which? Money Compare offering unmissable news, deals and money-saving tips delivered to your inbox every week.

Why is the government urging people to switch?

To be fair, asking people to open a bank account to have their benefits paid in is not a new message. The government did so in 2003 when Post Office Card Accounts were introduced, and again in 2014 when it renewed its contract with the Post Office.

In a response to a Freedom of Information request on this issue 2016, the DWP said that it is committed to ‘battling financial exclusion and helping more people move towards and benefit from mainstream banking’. It said that getting benefits directly paid into a bank, building society or credit union account is ‘the most efficient, secure and reliable way of making payments’.

There are major benefits to using a bank account over the Post Office account – you stand to be eligible for the best energy tariffs, for example, by having the ability to pay by Direct Debit. The DWP stated that government paying departments want all customers to benefit from the ‘advantages of a mainstream account.’

Its letter, however, has caused some speculation online and in social media that it is a scam. The letterhead is ‘HM Government’ rather than DWP and because it’s signed by ‘Office Manager’. But this is genuine communication from the government. 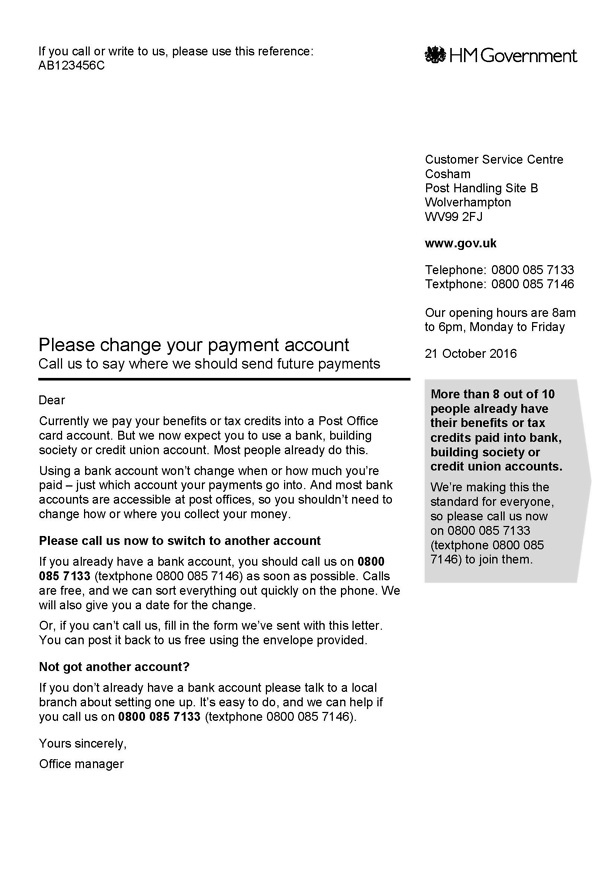 In January 2016, major high street banks launched basic bank accounts. These are designed for people who don’t qualify for other types of current account because they have a poor credit history, and could be a suitable replacement for a Post Office Ca Account.

They offer basic facilities for receiving money and settling bills, without overdraft facilities, and they can be a lifeline for people who have faced financial difficulties in the past. Account holders qualify for a debit card, rather than just a basic cash card, which can be used at ATMs and online.

Find out more in our basic bank account comparison guide.

The good news is that most current accounts can be accessed via a Post Office branch, including the Post Office’s own account which is operated through the Bank of Ireland, so it won’t be necessary to change your routine, once you’ve got a new account in place.

The DWP has also confirmed that it will be possible for people in your situation who cannot use a mainstream bank account to continue using a Post Office Card Account until 2021. It has set up a free helpline for people with the accounts, which can be reached on 0800 085 7133.

A version of this story first appeared in the I newspaper, written by Which? Money editor Harry Rose.