Tastier drinks, a smoother texture and longer-lasting freshness – that’s what’s commonly promised by proponents of ‘vacuum blending’, an emerging innovation in the blender market. We tried out the new Philips Avance vacuum blender to see whether it’s worth buying into the trend.

Philips claims that, by sucking all the air out before blending ingredients, the vacuum helps to prevent oxidisation and loss of nutrients. The lack of air is also claimed to result in smoothies that have less foam and separation, retain their vivid colour over time, and have a 50% smoother blend.

So does this pricey blender make the ultimate smoothie? We tried it out alongside against a regular blender to see if the differences were noticeable.

Read on to see how our vacuum smoothies compared with regular ones, or alternatively skip straight to the full Philips Avance Vacuum Blender first look review for our overall verdict on this blender.

We made two different smoothie recipes – a simple banana and strawberry smoothie, and a green smoothie – in both an ordinary blender and the Philips vacuum blender, and compared them side by side.

We tasted each smoothie, did a visual assessment of the blend, brightness and any separation, and took a photo. We then checked back on them at regular intervals over a period of four days to see which one held up better. Below you can see the results.

Straightaway, we noticed that the smoothie made in the vacuum blender was almost completely free of air bubbles. This gave the drink an ultra-smooth texture that was pleasing to drink.

The green smoothie made in the vacuum blender was also slightly more vibrant than the one made in a regular blender – possibly a sign of less oxidization.

Otherwise, both sets of smoothies looked very similar, and we couldn’t identify any difference in taste between the two.

You can slide the below image across to see how the smoothies compare straight after blending and after a day in the fridge. The vacuum smoothie is on the left.

After one day in the fridge, uncovered, the only difference we could spot was that the green smoothie from the vacuum blender had retained its vibrancy and smoothness. However, it still had a discoloured layer at the top where it was in contact with the air, just like the ordinary green smoothie.

Neither smoothie had separated. This is when the pulp rises to the surface and liquid drops to the bottom, and can happen when you leave smoothies or juices lying around, though it depends on what you are blending.

We kept the smoothies in the fridge over the weekend to see how they would last over a longer time period. One of the only differences was that the vacuum-blended green smoothie had a slightly thinner discoloured layer on the top. There were no noticeable differences between the berry smoothies.

Philips Vacuum Blender: is it worth it? 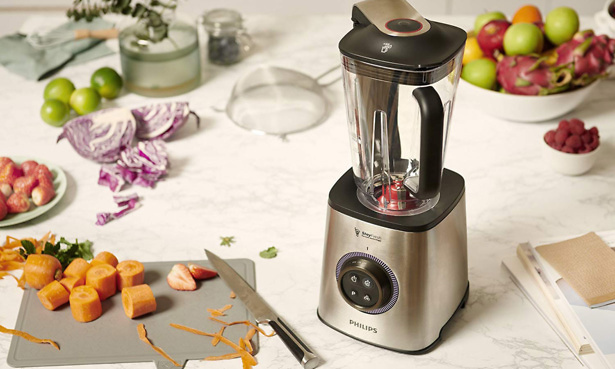 Overall, we didn’t think the vacuum feature made a significant difference to the final blend. If you’re a stickler for a smooth drink, it could be a good option, but bear in mind that the vacuum feature adds an extra layer of complication to making your morning smoothie.

Get our verdict on how easy it is to use and clean, how noisy it is, and how well it tackles tough ingredients, by heading to the full Philips Avance High Speed Vacuum Blender first look review.

The science behind vacuum blending

The central premise behind all vacuum blenders is that they remove most of the air (and therefore oxygen) from the jug before blending.

With ordinary blenders, the high-speed blending action can introduce lots of air into the mix. So, in theory, the lack of oxygen in the blending jug would help to prevent the smoothie oxidising – in the same way that avocados or apples go brown – by preventing enzymes from undergoing a chemical reaction that creates melanin.

The lack of oxygen should also help to stop water-soluble vitamins, such as B-complex vitamins and vitamin C, from oxidising – helping to preserve the amount of each in your smoothie.

You may think that as soon as you take the lid off, and allow air back in, that it will be just the same. But Philips claims that the most oxidization occurs during blending when air is incorporated into the mixture.

We can’t comment on whether this blender really does retain more nutrients, as claimed, because this involves expensive and time-consuming tests with specialist equipment. However, ultimately nothing will offer the same benefits as eating the fruit and vegetables whole, as both blending and juicing will strip out some of the fibre, vitamins and minerals. For more advice, see our blending and juicing nutrition guide.