Apple recently introduced the newest member of its smartwatch family, and it’s jam-packed with features. But it faces some serious competition from Samsung’s flagship Galaxy Watch and the more affordable Fitbit Versa.

The fourth-generation Apple Watch exudes style and comes with some exciting new features. But it’s also horribly expensive. Prices start at £399 for the smallest (40mm) version. Versions with cellular connectivity are £100 more.

If that’s more than you’d want to spend, or, crucially, you’re not an iPhone user, the Samsung Galaxy Watch and the Fitbit Versa are two of your closest alternatives.

The 42mm Galaxy Watch starts at £279 and the 46mm version starts at £299. Prices for LTE models will be announced later this year, but we’re expecting them to be around £50 more. That’s still not cheap by any means, but it’s a bit more palatable.

The Versa, typically priced at £220, is more budget-friendly. It’s Fitbit’s second smartwatch, following on from the Ionic, and at a glance you’d be forgiven for mistaking it for an Apple Watch.

Read on for more about each of these smartwatches to find out which ticks the most boxes. You can also can click through to read our full reviews:

Let’s start with the visuals…

The Series 4 has the same recognisable rounded-square shape as its predecessors. The display is 30% larger than the Series 3, giving you more information at a glance, and it extends to the edges of the bezel. Overall the watch is slimmer than the Series 3: we’ll let you know if that means it’s nice and lightweight when we’ve tried it.

Apple has brought out several new watch faces, including water, vapour and fire animations (pictured below). The watch face shown in most adverts (called ‘Infograph’) can show up to eight ‘complications’ – icons you can touch from the watch face to open certain apps. 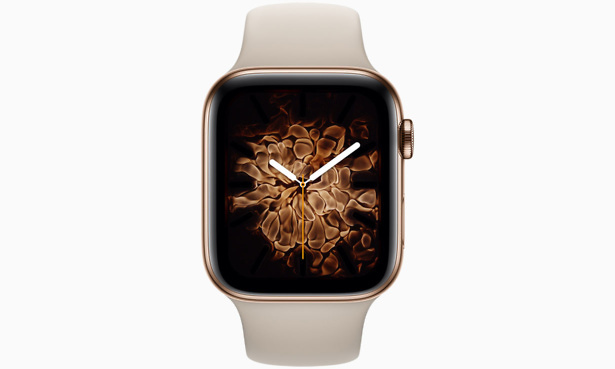 It has a new dual-core 64-bit processor and a redesigned digital crown that gives haptic feedback. You can buy the bezels in silver, gold and space-grey, all with an aluminium finish. You can get special edition bands from designers such as Nike and Hermes. Or, you can keep using your existing band if you own one of the earlier Apple watches.

The Versa is the least glamorous of the three watches here. Still, we like its Applesque ‘squircle’ shape more than we did the rather boxy Ionic. The Versa is a good, versatile size that won’t dwarf a small wrist, nor look small and silly on a large one. It’s also comfortable to wear all day, which is essential.

It comes with a silver, black or rose gold bezel and strap, or you can buy special editions with charcoal or lavender woven straps.

It has a 300×300 pixel 34mm touchscreen LCD display. Fitbit doesn’t disclose information on its processors. There are plenty of third-party watch face options, some of which are free. Others you’ll need to pay for once your free trial is up.

There are three buttons on the side of the Versa for the exercise menu, the alarms and the home screen. We found the display good and clear, and easy to navigate using the buttons. On the downside, you’ll need to change settings such as the brightness of the screen via the app, whereas more advanced smartwatches let you do this on the watch itself. And it’s odd that Fitbit thought it worth dedicating one of its three buttons to the alarm function.

As you can see, the Galaxy Watch looks more like a traditional watch than the other two do. The 46mm version comes with a silver bezel. With the 42mm version, you can pick between rose gold and midnight black. Even the smaller size is bigger than the average ladies’ wristwatch, but it isn’t heavy or chunky.

The Galaxy Watch runs on a dual-core 1.15GHz processor and has a 360×360 pixel Super AMOLED display. You can customise the display with the functions that you use most often, and you can access a favourites menu easily by swiping down. When we tried out the Galaxy Watch, we found the display clear and bright, and easy to whizz through using the rotating bezel.

We think all three are eye-catching watches, with Apple edging slightly ahead in the style stakes. This boils down to personal preference, though. If you don’t love how your watch looks on your wrist, you’re not going to wear it every day, which defeats the point.

The Series 4 comes pre-installed with the new WatchOS 5. With the exception of the original Apple Watch, you can use WatchOS 5 on any of the earlier Apple smartwatches, so long as it’s linked to an iPhone 5s or later running iOS 12. The Galaxy Watch runs on Samsung’s own Tizen 4.0 OS, and the Versa runs off Fitbit OS.

Whereas Apple smartwatches can only be used by iPhone owners, Tizen and Fitbit OS are compatible with both Android smartphones and iPhones.

Apple says you’ll get 18 hours from a single charge with the Series 4, the same as with the Series 3. While that announcement got lots of applause at the launch in California, we’d have welcomed a longer period of grace between charges. It’s a pain to have to keep taking it off and charging it given that it’s designed to be worn day in, day out.

Fitbit says that you’ll get four days of battery life per charge with the Versa. In fact, we found it lasted longer than that in our tests. So you’ll only need to charge it twice a week, if that. However, that’s partly because there’s no battery-gobbling GPS – which we’ll come to shortly.

The Series 4 and the Galaxy Watch come with all the smart features you’d expect from smartwatches at that price point. You can read and create messages, use social media, control calls on your smartphone and set up calendar alerts. You can listen to music with wireless headphones via Bluetooth. You can make contactless payments with NFC via Samsung Pay or Apple Pay.

With the Series 4, you can now also activate voice-assistant Siri just by raising your wrist: you no longer need to push the digital crown or say ‘Hey Siri’, unless you want to keep that setting toggled on.

The Series 4 also has support for podcasts and a new fun-sounding retro Walkie Talkie feature (pictured below) for having short bursts of conversation with friends and family without making a full phone call. You can install the Walkie Talkie feature if you have an Apple Series 1 or later. 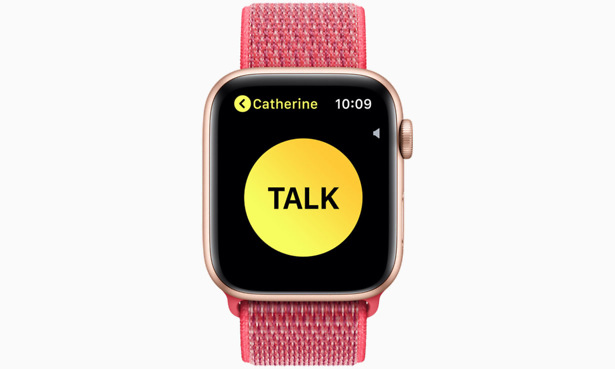 The Versa lags behind here. It lets you receive texts, calls, social media and calendar notifications, but not reply to them. That could get frustrating if you’re someone who gets lots of notifications and likes to reply to them right away.

You can make contactless payments with special editions of the Versa, but only with a very limited range of banks. So check if it applies to yours before hunting down a special edition. 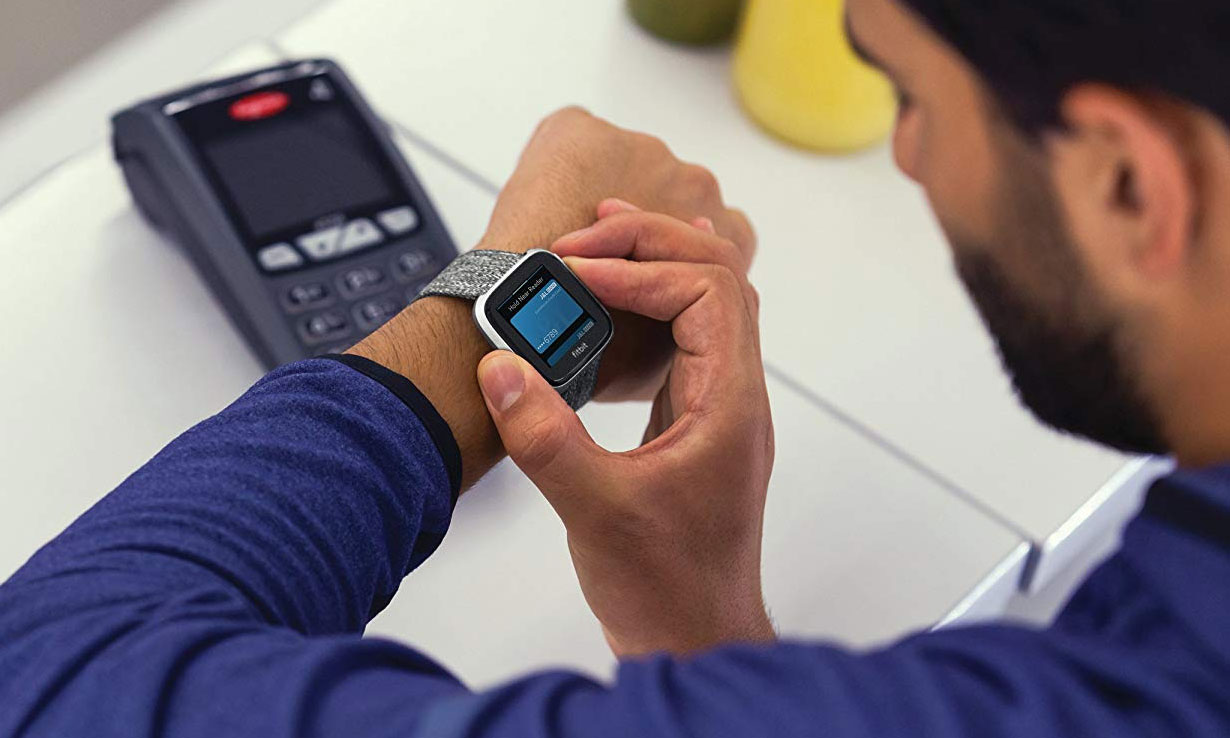 All three have the core fitness features you’d expect from a smartwatch, including a range of sports profiles and the ability to monitor heart rate, steps taken, floors climbed and calories burned. All three are water-resistant to 50 metres, meaning they’re fine for swimming in a pool or in the sea, but not for scuba diving or water-skiing. 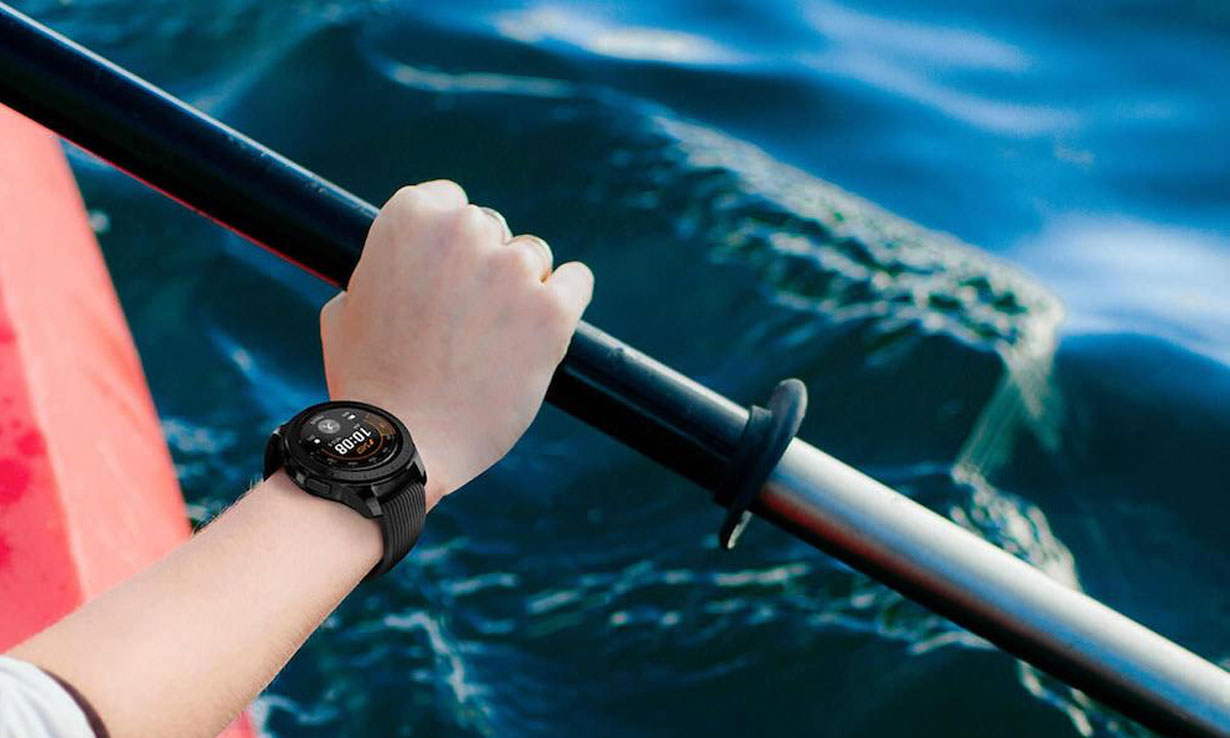 With the Series 4, you can now challenge other Apple-using friends to fitness competitions. That sounds like both a fun way to stay active, and a way for Apple to play on our FOMO and cement its position as the biggest in the business.

The Series 4 and the Galaxy Watch also have on-board GPS, meaning you can leave your smartphone at home and still track your run or bike ride. The Versa doesn’t have this, which is both surprising and disappointing.

Apple is storming ahead when it comes to health-monitoring functionality. Its coolest-sounding updates are its three new heart monitors. The Series 4 has the ability to notify you if your heart rate is too low and detect atrial fibrillation (note that Apple isn’t saying that the watch definitely will detect this, but it might). Most significantly, it can now take an ECG (electrocardiogram), which can be downloaded into a PDF and shared with a doctor. Sadly, this last feature isn’t available in the UK yet. Apple is aiming to roll this feature out beyond the US in the future.

Another exciting new feature of the Series 4 is the ability to detect ‘significant, hard’ falls. If you’re then immobile for a minute, it will call the emergency services on your behalf and send a message to your emergency contact.

But if you’re thinking you should rush out and buy a Series 4 for an elderly relative you’re worried about, hold your horses. Remember you can already buy fall-detection sensors that are much cheaper and simpler to use. Remember, too, that to use the Series 4 at all, you’ll need to own and be comfortable using an iPhone. You’ll also need to remember to keep charging your smartwatch after every 18 hours of use. And you’ll need to be near your phone for this feature to work with the basic Series 4 (not with the Series 4 with cellular). In short, you should view the fall detector as a nice extra safety feature for people who’d already be buying the watch.

The Versa and the Galaxy Watch come with a range of sleep tools for understanding your sleeping patterns and (in theory) helping you get a better night’s rest. The Versa can auto-detect when you’re asleep (assuming you wear your Fitbit when you go go bed of course), give personalised guidance on how to improve your sleep and even monitor sleep apnoea – a sleep disorder that can be serious. 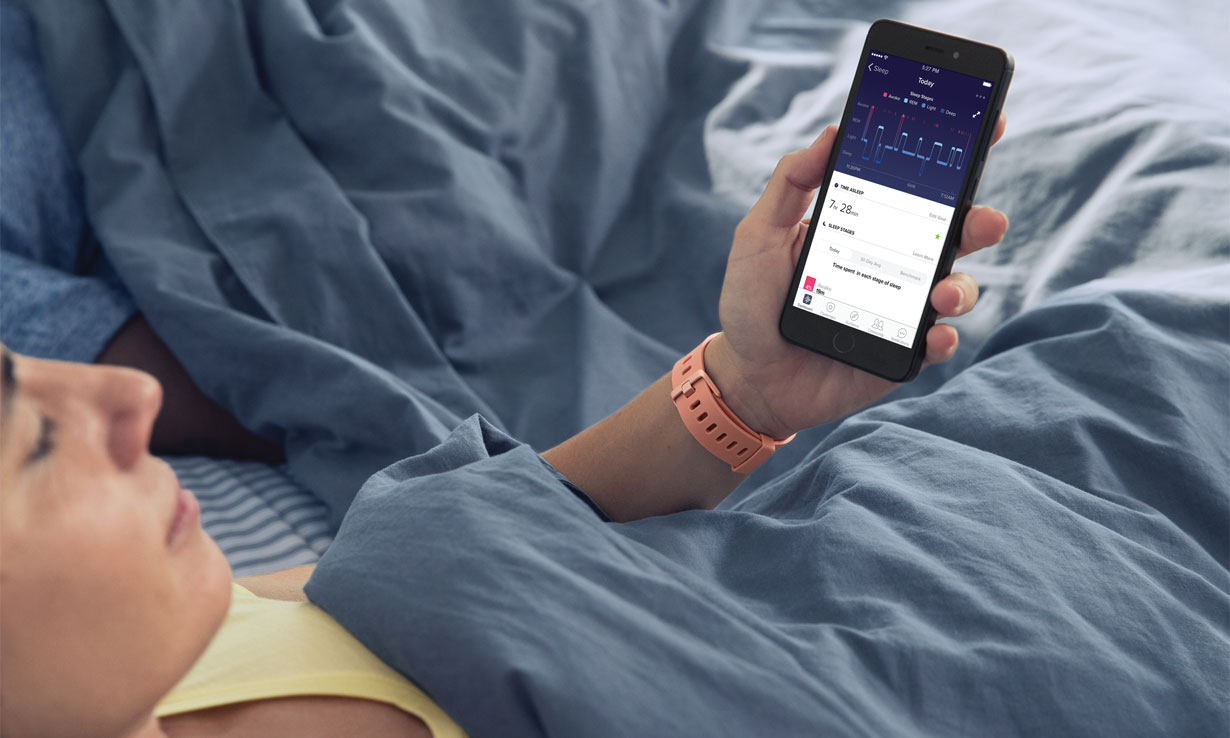 Which smartwatch is the overall winner?

Ultimately, it depends what you’re looking for in a smartwatch. The Galaxy Watch has an impressive range of features, a great claimed battery life, it looks stylish and it isn’t as horrifically expensive as the Series 4 – for which you’re undoubtedly paying partly to feel part of the Apple community.

If you just want fitness-tracking and basic smart features, the Versa will see you right. Meanwhile, Apple is light years ahead in terms of its new health features.

Looking for a different smartwatch altogether? Jump straight to our independent smartwatch reviews to see which models we recommend.