A new code of practice from telecoms regulator Ofcom have now come into effect, requiring broadband providers to clearly tell customers how fast their speed will be before they sign a contract.

Customers will be told what speed they will receive at peak times (8-10pm) and have the right to walk away if their speed drops below a minimum level.

The code is voluntary, but the UK’s biggest providers (BT, EE, Kcom, Plusnet, Sky, TalkTalk and Virgin Media) are signed up now and it’s expected more will join.

Which? has long campaigned for faster, better and more reliable broadband, and welcomes the new requirement to make broadband deals more transparent for consumers.

Sarah Threadgould, Which? chief customer officer, said: ‘Unclear and confusing information about broadband speeds has been an issue for consumers for far too long – so we’re glad these measures are being introduced.

‘Providers should immediately adopt these changes to ensure that customers clearly understand the minimum speeds to expect when they sign up and have the right to walk away if that provider fails to deliver.

‘We will be keeping a close eye to make sure the voluntary code is working for consumers, if not, Ofcom will need to step in and take stronger action.’

See how the providers compare using our overview of the best and worst broadband providers of 2019.

The changes to the current code of practice are: 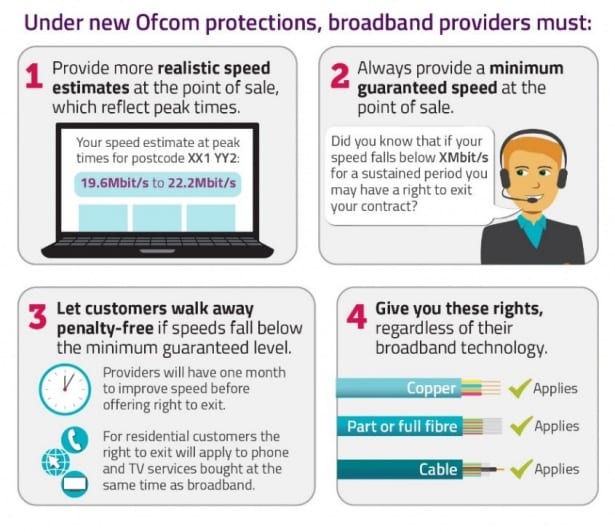 Are you getting the broadband speed you paid for?

When you signed up to your broadband deal, the provider should’ve given you a clear idea of what speed you could expect in your home. If you’re one of the people up and down the country experiencing issues with broadband, use our free broadband speed checker to help check whether the speed you’re getting is what you signed up for.

Use Which? Switch to find the best broadband deals where you live.