The average homebuyer only owns their kitchen and bathroom when they take out a mortgage on a new home, according to new research from MoneySupermarket.

The comparison site also says that the average buyer takes out a mortgage for 67% of the value when they buy a property.

Here, we look at how different areas of the UK compare and reveal the best mortgages available if you have a deposit of 30% or more.

How much of your home do you really own?

The average British homebuyer owns 33% of their property when they first complete on the purchase, equivalent to an average-sized kitchen and bathroom.

They buy the property using an average mortgage of £75,395, according to MoneySupermarket.

With each square metre of an average UK property costing £3,248, the findings reveal that the largest room in the house – the living room – is the most valuable space, and the master bedroom is worth almost £3,000 more than the kitchen.

The researchers also calculated average individual room costs in major UK cities based on the average house price in each location.

According to the analysis, a London living room is worth £45,000 more than one in Glasgow.

How on earth did they work that out?

Researchers at MoneySupermarket looked at average room sizes in 10,000 homes built since the 1930s using data from Rightmove and Zoopla, and combined this with the average UK house size according to LABC Warranty (67.82 sq m).

They then used MoneySupermarket’s own mortgage data to work out average house prices in different areas, and from there calculated how much each square metre in a typical home costs and what this means for different rooms.

Property owners in the North were paying less but owning more at an earlier stage, according to the research.

The table below shows how much would have been paid and owned in different areas of the UK after five years.

After five years a homeowner in Leeds would own 41% (£78,858) of the value of their home, which is equivalent to a bedroom and kitchen. However, by this stage a homeowner in Edinburgh would own 61% (£204,749), equal to three bedrooms and a living room.

Unsurprisingly, the average deposit put down varies from city to city, meaning buyers are in a different position right from the start of their mortgage term. Here’s how London and Edinburgh compare over the course of 10 years. 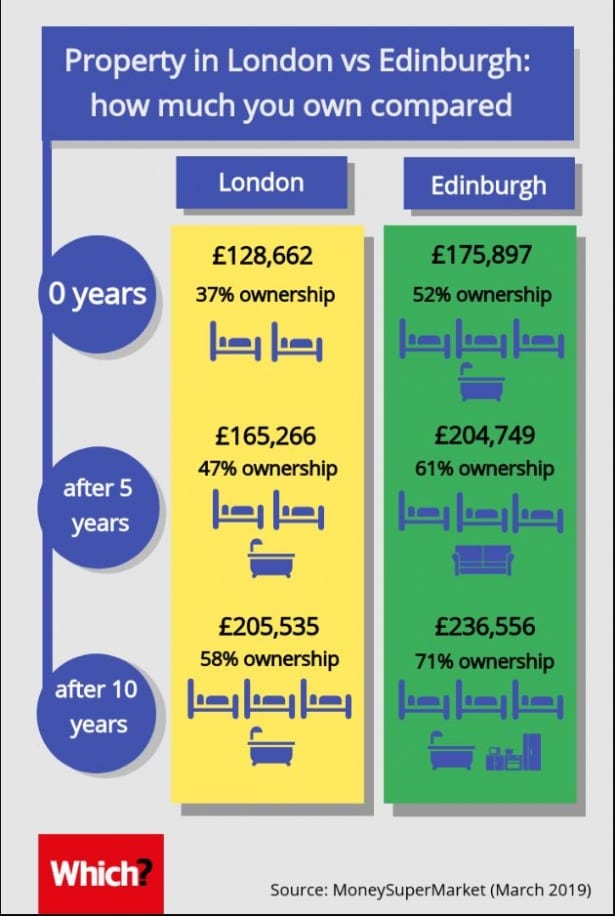 As the average homebuyer reportedly owns a third of the property when they complete on a mortgage, they may be interested in 70% loan-to-value (LTV) mortgage deals.

An LTV is how much of a mortgage you have in relation to how much the property is worth, expressed as a percentage. For example, if you took out a £150,000 mortgage on a house worth £200,000 you would have an LTV of 75%.

Here are some of the best 70% LTV deals available on a two-year fixed-rate basis, by initial rate.