The UK has officially entered a recession, with new Office for National Statistics (ONS) data showing the biggest drop in Gross Domestic Product (GDP) since records began. But what will this actually mean for you?

For many, the word ‘recession’ will bring back memories of 2008’s major economic downturn, when unemployment skyrocketed and productivity stalled.

The ONS says that we are now in the largest recession on record as a result of the coronavirus pandemic, so it’s natural that you might be concerned.

Here, Which? looks at what we know about this recession so far and the difference it could make to your cash.

What is a recession?

The definition of a recession is two quarters (ie six months) of GDP contraction in a row.

GDP – or Gross Domestic Product – is used as a measurement of a country’s economic success, based on factors including how much people, businesses and governments are spending, and the value of a country’s exports.

This is a stark fall in the context of the past two and a half decades, as you can see in this ONS graph, which makes for bleak viewing.

The historic Great Recession of 2008 never saw GDP fall at anywhere near the rate it did last quarter. 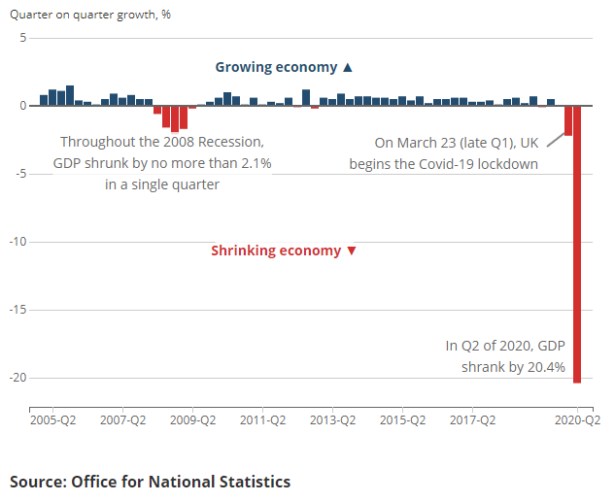 Jonathan Athow, ONS deputy national statistician for economic statistics, said: ‘The recession brought on by the coronavirus pandemic has led to the biggest fall in quarterly GDP on record.’

There are, however, already signs of recovery. Mr Athow continued: ‘The economy began to bounce back in June with shops reopening, factories beginning to ramp up production and housebuilding continuing to recover. Despite this, GDP in June still remains a sixth below its level in February, before the virus struck.’

Sadly, job losses could be on the cards for many.

From April to June, employment in the UK fell by the largest amount in over a decade, according to the ONS. Employment decreased by 220,000 in the second quarter of the year. This was the largest quarterly decrease since May to July 2009, in the depths of the last financial crash.

There are fears that the end of the furlough scheme in October, could be a cliff edge and lead many businesses to lay off even more staff, or to collapse altogether.

The Bank of England predicts unemployment will double by the end of 2020.

On the morning the recession was declared, Chancellor Rishi Sunak said ‘hard times’ had arrived and that more jobs would be lost.

While there are difficult choices to be made ahead, we will get through this, and I can assure people that nobody will be left without hope or opportunity. https://t.co/1FO6OzV15Z

One of the biggest ongoing issues of the 2008 financial crash was credit drying up for borrowers.

On the ground, we’ve also seen fewer 0% interest credit card deals, 90% and 95% mortgage deals being withdrawn as well as lenders tightening up lending criteria to certain ‘riskier’ groups such as the self-employed and first-time buyers.

To counteract the credit crunch, we could see another cut to the Bank of England base rate, currently at a historic low of 0.1%.

The Bank is considering setting a negative interest rate, a UK first which could have a huge knock-on effect on savings.

The Bank of England base rate determines how much banks are charged for borrowing money. The banks use this money to grant customer loans and then make a profit by charging interest on the repayments.

A high Bank of England base rate means banks are more likely to offer high savings rates, as using savers’ deposits to fund the bank’s loans is cheaper than borrowing from the central bank. If the base rate is low, being able to borrow cheaply from the Bank of England can be far more attractive than having to pay interest to savers – which is why banks may then reduce their rates or pull particularly popular savings accounts.

Savings account interest rates have been falling since coronavirus struck, and there’s a possibility that banks could even end up charging customers to keep savings if the base rate goes negative.

In theory, a negative base rate is a way to get people to pump money into the economy. As we’ve seen with lower base rates, an environment is created where savings are unattractive, but spending is easier – especially if banks pass cheap rates to their mortgages and loans.

Is your money safe with your bank?

Some of the defining images of the 2008 recession are those of people queuing up at ATMs to withdraw cash from struggling banks.

But there’s no need for you to run to the cashpoint.

Thanks to the protection offered by the Financial Services Compensation Scheme (FSCS), your money is protected up to £85,000 per institution.

This means if a bank does collapse, you’ll be able to recover your cash up to this amount.

There’s also a measure to protect what are called ‘temporary high balances’ (THBs) – which is money you might have from things like house sales, redundancy pay or inheritance. This is protected up to £1m by the FSCS.

Previously, THBs were protected for six months, but on 6 August this was extended to 12 months due to concerns that the pandemic could cause delays in moving this money with banks branches shut or telephone lines very busy.

What has the government done to help?

The government has taken steps to curb some of the anticipated effects of coronavirus on household finances and the economy.

These include the furlough scheme for workers, the self-employed income support scheme,  payment holidays on mortgages and other forms of borrowing, the Eat Out to Help Out scheme and a stamp duty cut for homebuyers.

But all of these measures have an end date and it’s not clear yet what further support there will be for incomes and jobs.

Memories of the 2008 recession are tied up with the response of David Cameron’s governments.

Coming into office in 2010, Cameron as Prime Minister and George Osborne as Chancellor embarked on a large-scale project of austerity, slashing government spending in an effort to ‘balance the books’.

As a result, billions were cut from the welfare state, leaving many people struggling.

Public sector workers faced real-terms pay cuts for a decade due to pay freezes and pay rise caps below inflation.

But austerity was not an inevitable result of the recession. It was a choice the government of the time made. Some economists have suggested that it may actually have harmed economic growth, rather than strengthened it.

Although the Conservative party is still in government, the current leadership has repeatedly ruled out a return to austerity, apparently seeking to distance itself from the cuts of the past.

And Mr Sunak’s response to the coronavirus pandemic so far has been to boost spending rather than slash it.

As to whether this will continue throughout his tenure, we’ll have to wait and see.

When will we get out of this recession?

Anything we can say about when this recession will end would be pure speculation at this point.

It will depend heavily on a number of unknown factors, such as the government’s response, and whether there’s a large second wave of COVID-19 later this year.

EY Item Club, who use a similar economic model to the Treasury, estimates that the UK could take until 2024 to return to the size it was before the lockdown.

GDP did begin to grow by 8.7% in June relative to May 2020, but overall it’s still smaller than it was in February. 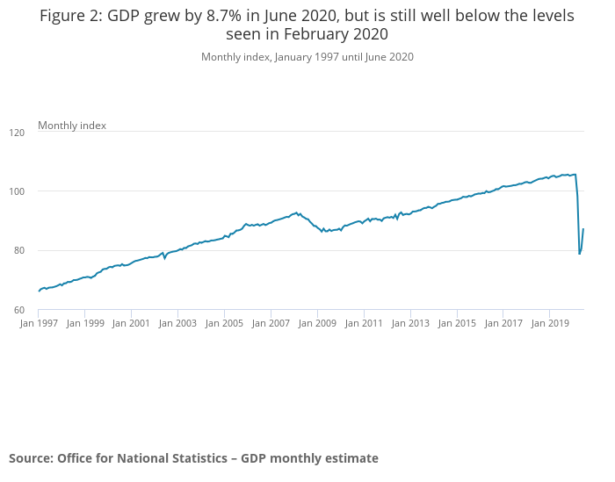 If GDP continues to grow over the coming months, we’ll see the other side of this recession soon enough. But without sustained growth and with a potential second wave on the way, the end could be a long way off.