Thousands of flat owners are being forced to pay hundreds of pounds per month for round-the-clock fire wardens because their buildings are deemed unsafe.

Known as ‘waking watches’, these patrols can be forced upon leaseholders who live in buildings with potentially dangerous cladding and other safety defects, with hundreds added to their monthly service charge bills.

Waking watches are installed when buildings fail safety tests, which were created to try and avoid a repeat of the Grenfell tragedy. But some homeowners are finding the costs too much to bear.

Leaseholders representing four developments told Which? that they and their neighbours are struggling to cover the costs of waking watches – and sometimes they’re not even receiving a worthwhile service, with some wardens found to be cutting corners or even sleeping on the job.

Homeowners in these four developments alone have paid an estimated £906,500 for waking watches so far, and the bills keep on coming.

Here, we take a closer look at this growing phenomenon, and the people who are suffering.

What are waking watches?

Waking watches consist of wardens who patrol a building’s common areas looking out for signs of fire, and who oversee a building’s evacuation process if a fire starts.

They can be required in buildings that fail the new fire safety tests created after the Grenfell tragedy, for example if they’ve been built with unsafe cladding or other dangerous materials.

Waking watches are intended as a temporary measure to protect homeowners until unsafe materials are removed. But since removing these materials can take months or even years, watches can stay in place for long periods, with large bills piling up every month.

The often substantial costs for these watches fall on leaseholders – the people who own and usually live in the flats – rather than the freeholders, who own the building itself. This is despite them being unaware their flats were unsafe when they bought them, and not being to blame for the newly discovered poor safety standards.

No end in sight

Many leaseholders are now paying hundreds of pounds a month for their waking watches, with no end in sight.

This means leaseholders across the UK are potentially paying millions of pounds collectively before any remediation work even starts.

The total collective costs of waking watches from four of the developments we heard from was approximately £906,500. This will just be a fraction of the total across the country.

According to LBC, there are 590 buildings in London with waking watches, which could be costing up to £144m a year for flats in the capital alone.

One leaseholder told us she had personally spent £11,000 on a waking watch so far.

Failing a fire safety test can also land your home with a £0 valuation, meaning you won’t be able to sell it or move out to escape waking watch bills you can’t afford.

‘It’s so out of control’

Alex Dickin, from Cardinal Lofts in Ipswich, had a waking watch installed on 6 November which is costing the 81 flats in the building £5,625 per week.

He believes this works out at about £300 per flat per month, and says that the costs were passed onto leaseholders without consultation by his building’s managing agent.

The monthly charge has made a huge difference to Alex’s finances. ‘£300 is around 20% of my monthly income,’ he told us. ‘And it’s something you don’t plan for. You never expect to pay two people to patrol your building. So it came out of the blue; it was a complete shock.’

Alex described the wardens as a ‘constant reminder’ that his building is dangerous.

The cost hasn’t yet been passed to leaseholders, but Charlotte fears it will be. She’s expecting to find out in September 2021, which leaves her entire block in limbo with huge bills potentially coming their way. 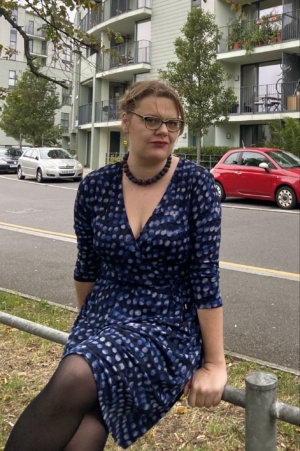 People in Charlotte’s building feel ‘personally violated having these people in their space’, she said. ‘It’s a constant reminder of the issues and a failure of fire safety.’

She says she’s seen wardens appearing to cut corners, ‘But I don’t want to blame them – it’s the system itself.

‘I feel like my home’s been taken away from me already,’ she says. ‘Not a day goes past we don’t get reminded of it. It’s just a feeling of complete hopelessness.’

Another leaseholder in St Albans paid roughly £100 a week for a waking watch which was removed after nine weeks when a new fire alarm was installed. They say wardens were caught sleeping, reading papers and watching football matches and Netflix on the job. 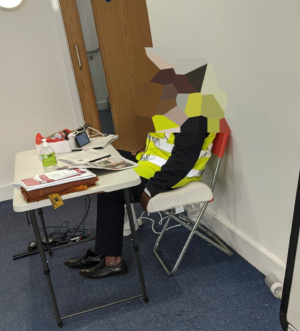 This image has been obscured to protect the individual’s identity.

With wardens only patrolling communal areas, would they really be able to spot a fire?

The National Fire Chiefs Council (NFCC) – which drew up guidelines around waking watches – says they would. But the watches aren’t intended as a long-term solution.

When we asked the NFCC for comment, it directed us to its website’s FAQs page.

‘The aim of a waking watch is to ensure there is sufficient warning in the event of fire to support the evacuation strategy and has been utilised in buildings before the Grenfell Tower fire. It is intended for very short periods of time whilst the increased risk is being urgently addressed through either remediation or the installation of a common fire alarm system.’

On situations where remediation can’t happen quickly, the NFCC says:

‘Building owners should move to install common fire alarms as quickly as possible to reduce or remove the dependence on waking watches. This is the clear expectation for buildings where remediation cannot be undertaken in the “short term”. This approach should, in almost all circumstances, reduce the financial burden on residents where they are funding the waking watches.’

And can leaseholders can trust that wardens are competent? The NFCC says companies providing waking watches have a duty to ensure their staff are fully trained.