Marks & Spencer may be better known for its sandwiches, bras and TV ads than modern, innovative shop floors, but like its competitors, it’s having to adapt to survive the rapidly changing retail landscape.

M&S is now planning a combination of store makeovers and closures, increased contactless shopping opportunities and branded product ranges in the hope of retaining its status as one of Britain’s best-loved shops. But it’s not all about future-gazing: the retailer also announced last week that it would be reintroducing St Michael, its heritage sub-brand.

So how much will your experience of shopping with Marks & Spencer change? We explore the retailer’s plans in more detail below.

How are M&S stores changing?

Marks & Spencer seems to be recovering well from the pandemic, with clothes and homeware sales in the first half of 2021 up 92% year on year. But the numbers are still down 2.6% on the same period in 2019, according to Retail Gazette – and the retailer is reportedly planning to close another 30 stores on top of the 60 it’s already shuttered since March 2020.

So, how to lure shoppers to the stores that do remain?

Visitors to the Solihull Retail Park branch can order coffee and lunch via touchscreens or their phone. Two more branches are rumoured to receive a similar hi-tech makeover soon.

Marks & Spencer is set to knock down its flagship store on London’s Oxford Street, which has been open since 1930, and rebuild a multipurpose space which will combine a significantly reduced shop size with offices and potentially leisure facilities, according to The Guardian.

The more compact central London store will continue to offer groceries, clothing and homeware, as well as digital in-store shopping technology to ‘seamlessly integrate’ with its website.

The retailer also plans to open or extend 17 stores within the next two years, including ‘a number of former Debenhams sites’, according to its CEO Steve Rowe.

Marks & Spencer has confirmed it is relocating its Leeds store to a former Debenhams branch in the White Rose shopping centre. Property developer Landsec said the new branch would have a 15,000 sq ft Foodhall, clothing and home departments, and an M&S café.

Why is M&S refurbishing its shops?

Rowe said M&S is ‘modernising [its] stores in a relatively cost-effective way’, adding that the way coronavirus has impacted the retail market has meant it needs ‘to move faster’ to upgrade its store estate.

He believes branches can be a great source of ‘competitive advantage’ if they are the right stores, in the right location, with the right services. ‘They have to work with online so we offer a brilliant omni-channel experience,’, says Rowe.

The shop closures and relocations have led to 7,000 job losses to date, as well as 950 head office roles being axed. M&S made these cutbacks after suffering a pre-tax loss of £209.4m from April 2020 to April 2021 compared to the previous year.

Marks & Spencer has had a turbulent time of it in recent years, struggling to attract younger shoppers to its clothing departments despite numerous celebrity-laden campaigns.

But what do people who do shop with it think of their experiences?

Each year, we survey thousands of shoppers to find out what they think of the UK’s biggest retailers. You can find out whether M&S is any good when it comes to buying clothes, shoes, furniture and homeware, and health and beauty products in our guide to the UK’s best and worst shops.

And, if you’re wondering whether its Food Halls impress grocery shoppers, check out our Marks & Spencer supermarket review.

M&S is working on updating its selection of products and services at the same time as making cutbacks. Here are some of the steps it has taken so far and its proposals for the future (links take you to more info on the M&S site):

Staying relevant to as many people as possible is an important step in keeping the business going, and Marks & Spencer has been striving to push itself out of the upmarket section of the retail market and into the mainstream.

One of the ways it has done this is through celebrity-led marketing, starting back in 2018 with a monthly video series featuring a review panel (Amanda Holden, Paddy McGuinness, Emma Willis and Rochelle Humes, pictured below) talking about their favourite M&S Products. M&S said the celebs were selected as they all had families, which ties into its desire to attract young families to its food range. 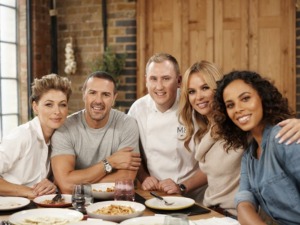 The retailer then kicked off its first-ever headline TV sponsorship deal with the 2019 series of ITV’s Britain’s Got Talent – and teamed up with ITV again this year for six-part cooking show Cooking with the Stars in July. The programme saw celebrities pair up with professional chefs to compete for the ‘best cook’ title using M&S products to prepare their dishes.

Marketing director Sharry Cramond said the show was intended to reflect that ‘one of [its] strategic priorities is to communicate to people that we actually have a much broader range than people would expect’.

On a practical level, Marks & Spencer has launched larger pack sizes of food products, bolstered the government’s £15-worth of free school meal vouchers to £20 and introduced a children’s book called Farm to Foodhall to help families explore the origins of food.

The retailer hopes that this push into the family market, combined with all of the initiatives outlined above, will help it flourish well into the future and continue to serve UK shoppers in new and innovative ways.