Shoppers will be able to request cashback over the till in their local convenience store without needing to make a purchase or pay a fee.

A new scheme by LINK is set to be rolled out in thousands of local shops across the UK, making it easier for people to access their money at a time when an increasing number of bank branches and ATMs are closing.

Here, Which? explains how the cashback without purchase scheme works, and outlines why we believe more needs to be done to protect access to cash.

The cash machine network LINK says its ‘cashback without purchase’ scheme will be rolled out in more than 2,000 shops before the end of the year.

The scheme will allow people to check their balances and get cashback of up to £50 at the till without needing to make a purchase.

You’ll be able to withdraw cash using chip-and-pin, contactless, Google Pay or Apple Pay. The service will only work with UK debit cards.

One of the scheme’s main benefits is that you’ll be able to request any amount from 1p to £50.

This means that you won’t be limited to accessing cash in the denominations dispensed at cash machines.

Where will cashback without purchase be available?

Initially, the scheme will be available at shops that use Paypoint as their payment service provider.

LINK says the scheme is already live in around 1,000 shops, and that figure will double in the next month.

Paypoint services tend to be available in grocery stores (such as Londis, NISA and SPAR) and independent local shops, rather than larger supermarket chains.

So far, Paypoint is the only payment network to sign up to the scheme, though LINK says it hopes its other partners will follow suit.

How to use the Cash Locator

You can find your nearest location by using LINK’s Cash Locator, which is available on its website or as a mobile phone app.

To use the Cash Locator, type your town or postcode in the search box and click the magnifying glass.

You’ll then be shown the nearest locations on a map. The green icons below are free-to-use ATMs, the purple icons are ATMs that charge a fee, and the yellow icons (marked ‘CT’) are locations where the cashback without purchase scheme is in operation. 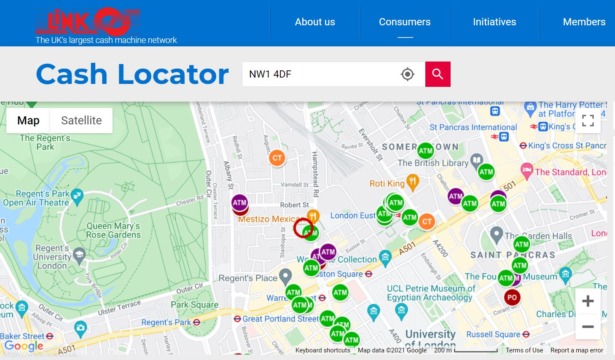 Customers withdraw an average of £27 during trial

LINK’s announcement comes after a successful year-long trial in four communities around the UK.

Listen to the episode of the  Which? Money Podcast with experts discussing how the pandemic threw up new problems for those who rely on cash.

Is cashback without purchase a good thing?

Which? believes that while LINK’s move is a step in the right direction, more must be done to protect access to cash for those who need it most.

Gareth Shaw, head of money at Which? says: ‘Everyone should have reasonable access to their own money without having to pay, so it’s good to see a cashback scheme rolled out to communities who rely on cash the most.

‘Schemes like cashback without purchase have a role to play, but they won’t be enough on their own to plug the gaps in the UK’s fragile cash system.

‘That is why the government must urgently press ahead with legislation that guarantees consumers can continue to access cash for as long as it is needed.’

How branch and ATM closures threaten access to cash

Bank branches and ATMs are closing at a rapid rate. When we analysed data from LINK, we found that 8,000 ATMs had closed in the space of 18 months – the equivalent of 13% of the total number of machines.

Separate Which? research found that between March 2020 and July 2021, 801 bank branches were closed. That number is continuing to rise – TSB announced earlier this week that it will close 70 branches next year, adding to the 164 closures it announced last year.

TSB says that over 90% of its transactions are now carried out digitally, but we’re concerned that millions of people are not ready or able to bank online and instead rely on local services.

The most recent data from the Financial Conduct Authority (FCA)  shows people in rural areas are worst hit by branch and ATM closures, with just 77.3% of people living within 2km of a free cash source, compared to 99.7% of those in urban areas.

The Which? Cash Friendly Pledge

In May, we launched our Cash Friendly Pledge, to give retailers the opportunity to show customers they welcome cash payments.

To date, more than 200 businesses have signed up, including the likes of Aldi, Co-op and John Lewis, and a range of smaller independent businesses.