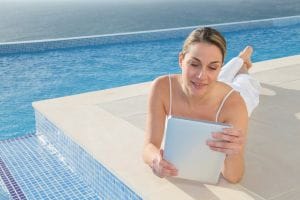 Data roaming on your iPad or tablet PC can be up to 1,000 times more expensive than equivalent 3G internet use in the UK, Which? has discovered – particularly outside of Europe.

Don’t get caught out if you’re thinking of using your iPad 2 or other tablet PC abroad. In an analysis of tablet data-roaming fees charged by the UK’s mobile networks, Which? has found that accessing 3G internet on your tablet when you’re abroad could cost you thousands of pounds for the same usage that would typically cost £15 or less in the UK.

We’ve also found that some operators could do more to make their data roaming charges clearer on their websites, as details of tablet roaming charges are often hard to find.

Tablet PCs like the iPad and Samsung Galaxy Tab bring ultra-portability to personal computing, offering the ultimate access to the internet on-the-move. And charges for 3G web access within the UK are reasonable –  starting at as little as £7.50 a month for 1GB of data with mobile network 3’s Sim-only iPad plan according to Which? Mobile.

But if you’re tempted to pop your tablet into carry-on luggage so you can get online abroad, Which? advises that you contact your operator first. Some don’t even allow data roaming on their tablet plans, and those that do charge a pretty penny for this flexibility.

The cost of 1GB of data roaming

Many operators that allow data roaming on their tablet plans charge at least £1 per MB of data used overseas. Multiplied up, this would equate to a cost for just 1GB (1,024MB) of thousands of pounds.

For example, tablet data roaming in the USA with 3 costs £3 per MB. This would equate to more than £3,000 for the same GB of data that could cost as little as £7.50 within the UK.

Fortunately for its customers, who could otherwise be in for a nasty bill shock, 3 sets a default credit limit of £50 on its customers’ accounts. So, when roaming abroad they will be automatically cut off when they reach that point.

But 3’s not alone in having very high per-MB rates in some countries and not all networks have a default bill cut-off in place. T-Mobile, for example, charges £7.50 per MB outside of Europe, equivalent to more than £7,500 per GB. T-Mobile’s iPad 2 micro-SIM plan costs £15 per month for 1GB within the UK.

Even if your operator allows free use of 3G internet abroad, general web browsing and emailing over a fortnight’s holiday is unlikely to get you anywhere near hitting 1GB of use. But it could reach hundreds of pounds with regular daily use. And some online activities – such as online TV – are very data hungry. Streaming an hour or two of online TV, for example, could potentially eat up half a GB or more.

We’ve summarised the cost of 3G data roaming on your iPad or other tablet PC in two popular holiday destinations with the UK’s five mobile networks.

Our per GB costs in the table above for 3, Orange and T-Mobile are the per MB costs multiplied by 1,024. Regulatory or voluntary bill-cut offs imposed by operators may prevent you actually spending this much.

In EU countries, mobile operators must send you a notification to advise you of costs when you arrive in a foreign country. But out of the EU, this is down to individual providers.

We asked each of the four UK networks that allows tablet data-roaming what safeguards they have in place to prevent bill-shock to the tune of thousands of pounds.

One of the first places you might look to find out the data costs for using your tablet abroad would be the operators’ websites. When we took a look in late March, we found it wasn’t always as simple or clear as you might hope to find the information.

In some cases no data roaming cost information was given on the iPad or tablet tariff pages, with international charges covered only in a general price guide located elsewhere on the site. It was often left to the user to take a guess at whether the general international roaming charges for mobile phones listed also applied to tablets.

Which? mobile services expert Ceri Stanaway says: ‘With tablet data roaming costs often so astoundingly expensive, we’d like to see all operators do all they can to keep their customers informed of costs.

‘Ideally, this would be – as a bare minimum – both by sending a notification to your tablet advising of costs, no matter where in the world you are, and by making tablet roaming costs explicitly obvious on operator websites.’

The wide variation in prices and protections between operators also goes to show that data-roaming costs are something frequent travellers should bear in mind when choosing a tablet service provider.

Ceri adds: ‘T-Mobile told us that its lowest level EU booster – £1 for 3MB – would only give you around 15 minutes of emailing and general web browsing.

‘Until costs come down, my advice to anyone considering using their tablet for more data-heavy web tasks – such as watching online TV or video calls back home – is to steer clear of 3G data roaming and use free wi-fi access where available instead.’

Is data roaming too expensive?

While it makes sense that mobile operators’ own costs are somewhat higher for mobile internet access abroad than within the UK because they’re having to access foreign operators’ networks, the high costs to consumers with some networks are astonishingly high.

Tech news and analysis site ZDNet is currently gathering consumer support to leverage mobile operators to bring costs down for mobile internet roaming on all devices – including smartphones and laptops as well as tablets.

If you think data roaming is too expensive, sign the ZDNet petition campaigning for fairer data roaming.

And share your views on data roaming costs at Which? Conversation.