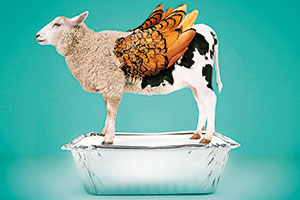 You ordered lamb…yet could be eating anything but

Exclusive DNA testing by Which? has revealed shockingly high levels of adulteration in lamb takeaways. Will you join our campaign to Stop Food Fraud?

Of the 60 lamb takeaways we tested, 24 contained meat other than lamb and seven contained no lamb at all.

Which? executive director Richard Lloyd says: ‘More than a year on from the horsemeat scandal, our research has uncovered shocking evidence of food fraud.

‘The government, local authorities and the FSA need to make tackling food fraud a priority and take tougher action to crack down on the offenders. This is vital to restoring trust in the industry, which is not only good for consumers but good for businesses too.’

If you’re a Which? member you can read the full magazine article what’s really in your take away? Not a member? You can sign up to Which? to get access to all our online reviews and advice as well as our monthly magazine.

UPDATE 17/04/14: In response to our findings, the FSA has announced a priority testing programme of lamb takeaways from around the UK beginning in May. Three hundred samples will be tested.

Did you order lamb?

Which? bought 30 takeaways in Birmingham and 30 in London (15 lamb curries and 15 minced lamb kebabs in each location) and tested them for the presence of lamb, chicken, beef, pork, turkey, goat and horse DNA.

In Birmingham a total of 16 out of 30 samples were adulterated: 11 contained a mix of lamb with beef and/or chicken and five contained no lamb at all.

In London eight out of 30 samples were adulterated: six contained a mix of lamb with beef and /or chicken and two contained no lamb at all. Five of the London samples couldn’t be identified in the testing, probably due to over-cooking or repeated cooking which destroyed the DNA.

We considered a sample to be adulterated if it contained more than 5% of another meat. Several of the other samples contained beef and chicken in lower levels but this could be due to cross-contamination at the restaurant or by the producer rather than deliberate fraud.

Food we can trust

Our results are not isolated cases. Trading standards and environmental health officers in Falkirk, Leicester, Warwickshire and West Yorkshire have found similar levels of fraud in lamb takeaways they have tested.

Consumer confidence in the food industry has been hit hard following the horsemeat scandal last February. In November 2013, nine months after horsemeat was found in our food, half of the people we surveyed told us they had changed their meat-eating habits as a result of the scandal.

It’s vital we can trust the food we buy so Which? is launching a new campaign to Stop Food Fraud and is calling on government, local authorities and the Food Standards Agency (FSA) to help restore consumer confidence.

Tell us if you spot food fraud by emailing homeeditor@which.co.uk or on Twitter @WhichHome.