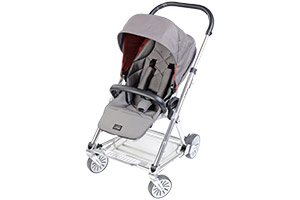 The updated Mamas & Papas Urbo 2 has just been tested.

The latest Which? pushchair test results are in and we’ve awarded two new Best Buys to the pushchairs which outshone the rest of the competition.

We’ve bumped and rolled five of the very latest pushchairs over the equivalent of 128 miles to see which ones came out on top.

As well as finding two Best Buys, our tests also uncovered one pushchair that isn’t easy to fold and that we think could easily be broken by accident.

Which? members can head straight to our pushchair reviews to find out which pushchairs are the best and worst.

Babystyle recently launched the Oyster2 pushchair – a new and improved version of the iconic Babystyle Oyster stroller, one of the most popular pushchair reviews on the Which? website. The Oyster 2 costs £299, and comes with several updates including a new hood design – but you’ll have to pay £70 extra to buy a colour pack which includes the hood.

Is the Oyster2 a Best Buy? Head to our BabyStyle Oyster2 pushchair review to find out.

Read all other other Babystyle pushchair reviews.

Mamas & Papas refreshed its range of pushchairs for 2014 by introducing updated versions of the popular Sola, Urbo and Mylo travel system pushchairs.

The new Sola2 travel system pushchair (£339) features a new ‘peek-a-boo’ window in the hood. Updates have been made to the wheels and shopping basket, plus a safety strap has been added. The Urbo2 (£449) travel system comes with a new footmuff, integrated insect net, snooze shade and more visible brakes.

Discover whether the Mamas & Papas Sola2 pushchair or the Mamas and Papas Urbo2 pushchair is good enough to be considered a Best Buy pushchair.

Check out all our other Mamas and Papas pushchair reviews.

What makes a Best Buy pushchair?

Watch our video to find out why choosing a Which? Best Buy pushchair won’t just mean a comfortable and safe ride for your baby, but could also make your life much easier.

Over the years we’ve tested hundreds of pushchairs in our labs, and have spent more than £80,000 on testing this year. All our tests are based on what matters to parents the most, and are designed to help parents-to-be avoid buying a pushchair that makes life more, rather than less, stressful.

In our lab we look at safety and durability, including how well a pushchair is made, its strength and stability and the quality of its locking mechanisms and brakes.

Along with our experts, our parent panel rates each pushchair on its ease of use. We assess all aspects of using a pushchair – including folding and pushing, attaching and removing accessories, cleaning and loading the pushchair into a car boot.

Watch out for these potentially unsafe baby products in 2020