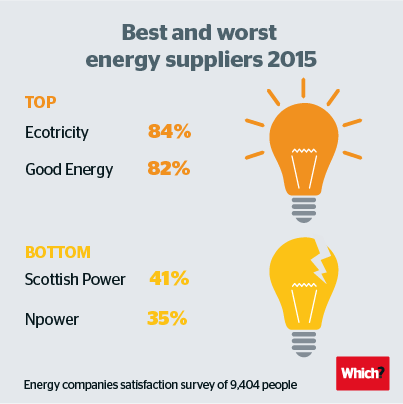 Which? reveals the best and worst energy suppliers 2015

Our annual survey on energy supplier customer satisfaction reveals that smaller energy firms score higher than British Gas, Eon, EDF Energy, Npower, Scottish Power and SSE – who all end up at the bottom of the table.

Ecotricity tops the annual Which? satisfaction survey, the biggest of its kind, ahead of fellow smaller suppliers Good Energy, Ebico and Ovo Energy.

We asked 9,400 people to tell us what they think of their energy supplier and to rate it on various criteria, including value for money and customer service.

You can see the full results for all 18 suppliers and find out more about them by clicking energy companies reviewed.

Ecotricity comes top out of 18 suppliers rated. It’s not the cheapest provider on the market, but 100% of its electricity comes from renewable sources.

Six companies score over 70% in our survey and all are smaller providers:

Many smaller suppliers offer something different to traditional providers. For example, Ecotricity and Good Energy are green energy providers, and Ebico is a not-for-profit company.

To find out more, read our full reviews on small energy companies.

The Big Six once again end up at the bottom of the table. It hasn’t helped that they have been accused of not passing on savings from falling wholesale energy prices to their customers. And the cheapest deals on the market have, until very recently, been offered by the smaller suppliers.

Npower comes last with a low customer score of 35%. It gets a high number of complaints, and in 2014 the regulator Ofgem asked it to sort its billing and complaints issues or face a sales ban. It has, however, a competitively priced fixed deal on the market. And in our latest call waiting time investigation, it took just over two minutes to get through to its customer service line – it used to take ages.

Scottish Power scores only 41% and has had a hard year. It came last in our call waiting investigation, with an average waiting time of 30 minutes for customer service but only a minute for its sales line. It was told by Ofgem to improve the way it treats customers and reduce the number of outstanding bills it hadn’t sent, or face a sales ban.

Which? executive director, Richard Lloyd, said: ‘For the fourth year running, smaller suppliers are wiping the floor with the Big Six on customer service. The large energy firms, which dominate the market, need to up their game as millions of customers deserve better.

‘We need the Competition and Markets Authority to propose radical remedies to fix this broken market. Instead of waiting for the outcome of the competition inquiry, companies should make immediate improvements to help restore trust among their long-suffering customers.’

The electricity market in Northern Ireland only opened up to competition in 2010 and is regulated. We reveal ratings for four domestic NI suppliers in our survey – Budget Energy, Firmus Energy, Power NI and SSE Airtricity. Find out their scores in our table of the best and worst energy companies.