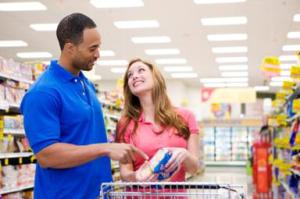 Asda was once again cheapest for our supermarket basket in October, but only just. It was only 94p cheaper than Morrisons, which charged £163.20 compared with Asda’s £162.26.

However, you might be surprised which supermarket charged a whole £10 more than Asda for the same 82 products.

As you probably know, most supermarkets have some kind of price comparison promise. This is where they compare their prices to their rivals’ prices.

In October, Tesco changed its price promise scheme. The previous scheme compared branded and own-brand equivalents at Sainsbury’s, Asda and Morrisons. If your shopping was cheaper elsewhere, Tesco gave you a voucher for the difference.

Under the new scheme, called Brand Guarantee, Tesco only compares against branded products and the price will be automatically reduced at the till if it would have been cheaper at another supermarket. The scheme operates both online and instore.

Want to know how customers rate Tesco? We ask 10,000 people each year how they rate their supermarket for everything, from customer service to value for money. Find out how Tesco scored in our Tesco review.

There was also another supermarket revelation in October – new figures showed that groceries cost less than they did a year ago.

Groceries cost on average 1.7% less than a year ago, according to analysts Kantar Worldpanel. That would have saved the average shopper £58 over that time period.

The falling prices are thought to be the result of supermarkets trying to undercut their rivals. This includes pressure from discounters Aldi and Lidl, which is forcing traditional supermarkets to cut prices.

It’s not just as simple as who’s cheapest though, as many supermarkets have price comparison schemes. This means that if some or all of your shopping would have been cheaper elsewhere, you may be offered a voucher, points or money-off for the difference.

This is how the different schemes stack up:

To calculate the average price of our basket, we used data from the independent shopping website Mysupermarket. We include discounts, but not multibuys.