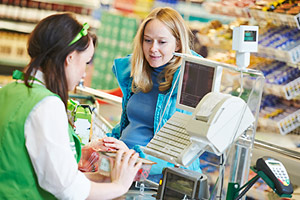 Asda was cheapest for our basket in April.

Asda was cheapest for our supermarket shopping price comparison basket in April but Morrisons was snapping at its heels, finishing a close second.

Asda charged £164.17 for the 82 items in our shopping basket in April, which was £15.99 less than the most expensive supermarket.

You can find out which supermarket was the most expensive, and what Morrisons, Ocado, Sainsbury’s, Tesco and Waitrose charged this month by clicking on our supermarket prices compared page. This also shows all the results for the last year.

Tesco’s price comparison scheme is different to those offered by the other supermarkets – if your shopping would have been cheaper elsewhere it now deducts money at the till or as you pay the bill online. That means it should charge the same as Asda for our basket. However, you need to buy at least 10 items to qualify for the scheme.

The supermarkets in April 2016

The big news in April was that Asda agreed to change its pricing tactics, after the regulator singled it out for poor practice during an investigation into supermarket pricing.

Asda has given a commitment to the Competition and Markets Authority (CMA) that it will change the way it uses was/now offers and multibuy deals. It won’t use the ‘now’ price for longer than the original price and will ensure that multibuy offers are better value than buying a single product before the deal.

Which? called on the (CMA) to take action on misleading supermarket pricing tactics and submitted a super-complaint in April last year. The regulator has since embarked on a further investigation resulting in the recent announcement.

And to add to Asda’s problems, this week the Advertising Standards Authority (ASA) ruled that its promotion for Choco squares cereal was misleading. Asda ran an online promotion offering three boxes of cereal for £3, or £1.20 each in July 2015, however, prior to the offer the cereal cost 97p.

Some of the supermarkets have a price matching scheme, so they will compare their prices against other supermarkets, however notably both Morrisons and Sainsbury’s have stopped doing this.

As the schemes vary, we’ve rounded up the differences below. Click the links to find out what the supermarkets’ customers think of them, and to find out if they have any own-brand Best Buys:

Every month, we look at the prices of between 70 and 100 products. This includes a range of everyday items, from bread to fruit juice, and varies from month to month.