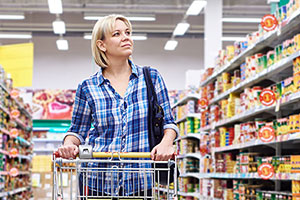 Each month, we analyse supermarket prices to find out which supermarket is cheapest for a basket of branded products. Asda has come out on top for the seventh month in a row.

The 75 popular branded products in the October basket included the likes of Flora, Tetley and Weetabix. It cost £142.64 at Asda.

To find out where the other supermarkets ranked, and to see results from the past three years, go to supermarket prices compared.

Supermarkets in the news in October

The big story in supermarket shopping this month was the rising cost of Unilever products such as Marmite. Tesco stores were briefly running low on Marmite and other products, after the supermarket refused to go along with the manufacturer’s price hike. The two sides came to an agreement shortly afterwards, however.

Morrisons later put up its Marmite prices by 12.5%. Unilever blamed the price rises on the pound’s drop in value since the vote to leave the EU.

Morrisons became the first of the ‘big four’ supermarkets (Asda, Morrisons, Sainsbury’s and Tesco) to offer a student discount. For a three-month trial period, it’s offering 10% off to anyone in higher education via the UniDays app. The discount covers most grocery items – including beer and wine – but excludes fuel, lottery tickets, prescription medicines, spirits and tobacco. And it only applies to in-store shopping.

Waitrose is trialing a change to its free hot drink offer. Currently, myWaitrose cardholders can get a free tea or coffee simply by swiping their cards at the till. But at the eight stores that are part of the trial, card holders will now have to buy something before collecting their free hot drink.

We start with a list of more than 100 popular products each month, which are likely to be sold in all six supermarkets we cover (Asda, Morrisons, Ocado, Sainsbury’s, Tesco and Waitrose). The products range from Heinz baked beans to Walkers crisps to Gillette razor blades.

Using data from the independent shopping website MySupermarket, we calculate the average price (including discounts, but not multibuys) for each item across a whole month. We add those average prices up to get the cost of the basket.

If a product hasn’t been sold in one of the six supermarkets during the month, then it’s removed from that month’s basket altogether to ensure a fair comparison.

Many supermarkets have a price-matching scheme, where they compare their prices against other supermarkets. They will often give you a voucher for the difference if your shopping would have been cheaper elsewhere. As the schemes vary, we’ve rounded up the differences below.

Tesco’s price-comparison scheme now deducts money at the till or as you pay the bill online, so should charge the same as Asda for our basket. However, you need to buy at least 10 items to qualify for the scheme.

Click the links to find out how each supermarket compared in our customer survey, and to find out which Best Buy products you can buy from each.