Passengers, who are unexpectedly made to put their hand luggage in the hold when at the gate, risk leaving valuable, uninsured items in an unsecured bag, new research by Which? Travel has found.

Hoping to cut costs on check-in staff and fuel, airlines have been encouraging us to travel with only hand baggage for years. But on a full flight, many plane cabins only have capacity for half of all passengers’ carry-on bags. So staff at the gate select a number of passengers’ cabin bags to be placed in the hold at the last minute, often not warning them to remove valuables or giving them sufficient time to repack. 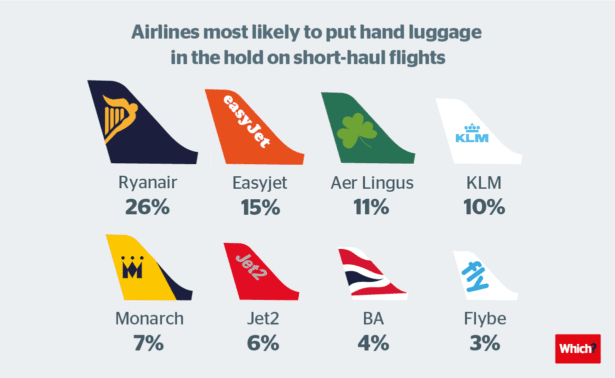 Airlines are liable for lost and damaged hold luggage, up to a value of around £1,200. But many airlines state in their T&Cs that they will not pay out for any valuables that go missing.

Which? Travel readers have reported jewellery, cash and tablets going missing from cabin bags that were unexpectedly put in the hold. None of these readers were compensated by the airline for their loss.

Valuables are also unlikely to be covered by travel insurance. Aviva, Axa, Churchill, Direct Line and LV all exclude cover for any valuables placed in the hold, regardless of whether the passenger had intended to keep their bag with them on the flight.

Bags in the hold frustration

Uncompensated theft from luggage was just one of the problems reported by readers who were separated from their cabin bag at the gate. Other issues included:

Which? Travel readers also told us that airline rules are not always fairly applied, with staff apparently selecting bags to go in the hold at random. Others were furious that, having relinquished their bags, they boarded to find a half-empty plane with plenty of room in the overhead lockers.

Complaining to your airline

Airlines cannot opt out of luggage liabilities, so it’s worth pursuing a claim for lost or damaged luggage, or items that have gone missing from your cabin bag.

Rory Boland, editor of Which? Travel, said: ‘Make sure you can easily take out wallets, keys, laptops and anything else you don’t want to lose, from the top of the bag.

‘If your valuables go missing from hand luggage that you had intended to keep with you, then you may be able to claim against the airline, especially if you were not warned to remove the valuables.’