Baselworld 2017 – the watch and jewellery trade show – saw a slew of Android Wear smartwatches from traditional watch makers and designers such as Armani, Diesel, Fossil and Guess.

In the past, Baselworld has been home to fancy Swiss-designed time pieces. But, it’s smart technology that’s dominated the show this year. In fact, there were so many connected devices announced that it was quite difficult to keep track. An overarching theme, however, was design. Read on as we take a look at why, and round up some of the most interesting announcements from the show.

The biggest update to Google’s operating system landed in March 2017 and, if Baselworld is anything to go by, we’ll see an onslaught of Wear 2.0 devices later this year. The update saw a host of new features, including custom watch faces for featuring third-party apps, and better compatibility with iOS devices. One of the biggest changes gives you greater freedom from your smartphone – standalone apps will work with any Bluetooth or wi-fi connection and won’t need your phone nearby for tethering. There will be a standalone Play Store for adding apps directly to a smartwatch, too. We’ll take a more in-depth look at Android Wear 2.0 soon.

Fashion brands have been launching hybrid smartwatches, which pair design with a small smattering of smart functions, for some time. But, there have been very few full-blown smartwatches that successfully marry true smart functionality with quality design – often managing either, but rarely both. At Baselworld 2017 it was another story, as designer brands merged Android Wear 2.0 with a passion for fashion. Unlike the Apple Watch Series 2, many models moved away from fitness tracking towards more traditional watch design.

The Android Wear 2.0 announcement seems to have spurred on some big names, with Fossil showing a huge number of smartwatches and other designer brands, such as Guess, Hugo Boss and Tommy Hilfiger, all throwing Android Wear devices in to the smartwatch ring. These aren’t going to appeal to everyone – some are downright ugly – but you certainly won’t be limited for choice by the end of 2017.

Fossil Group had a big 2016, and is set for an even bigger 2017, promising 300 connected timepieces by the end of the year. Baselworld saw a pair of slim Android Wear Fossil smartwatches – the Q Venture and Q Explorist – plus a selection of hybrid smartwatches, including the Q Accomplice and Q Activist. They also added a slew of new models to their portfolio across brands within the group, including plenty of Android Wear 2.0 smartwatches and some more hybrid models, too. 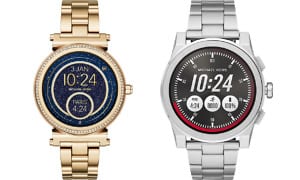 Michael Kors – the Access Sofie and the Access Grayson, aimed at women and men, respectively, are Android Wear 2.0 devices from luxury fashion brand Michael Kors. Both have metal bezels and link straps, plus a round AMOLED screen. There’s no official launch date, but it’s likely that we’ll see these before Christmas 2017. 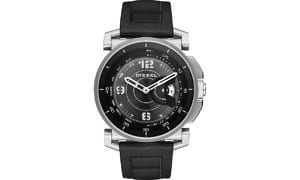 Diesel – the first full blown smartwatch from Diesel, the Diesel On will run Android Wear 2.0, feature a Snapdragon Wear 2100 processor and a chunky circular AMOLED touchscreen. Prices will start at $325, so when launched in the UK it’s likely to retail for around £300.

Emporio Armani – another first, Baselworld saw the inaugural Emporio Armani Connected Android Wear 2.0 smartwatch, which has a very similar design to the latest traditional Armani watch range launched in late 2016. As with other Fossil launches, it will run Android Wear 2.0 and feature a Snapdragon Wear 2100 processor. There will be a selection of hybrid Armani watches too, although details of these are currently scarce.

Despite the massive number of Fossil Group launches at Baselworld, it wasn’t the only big name making waves. 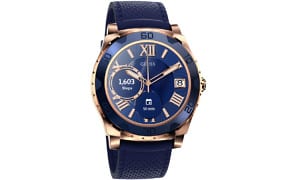 Guess Connect – we took a first look at the Guess Connect hybrid smartwatch last year, and felt that it may have been a case of style over substance. The fashion brand has now turned to Android Wear for their first proper smartwatch, and will replace the small digital display of the hybrid with a full OLED display and touchscreen. There will be a few options when it comes to design, but what’s for sure is that these will be anything but understated. 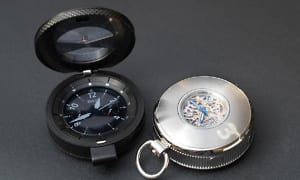 Samsung – in January 2017 we reported that Samsung had submitted two patent applications, both of which suggested it was investigating new and interesting designs for its smartwatches. Come Baselworld 2017 and, in a slightly peculiar move, Samsung unveiled a new concept design – in the form of a pocket watch version of the Samsung Galaxy S3. It may never move beyond a concept though – disappointing for the tech-savvy train driver. Samsung also teased us with some new designs for the S3, including new materials, which are a result of a partnership with Swiss designer Yvan Arpa. 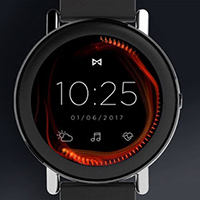 Misfit Vapor – it wasn’t all new launches and concept designs though. We first saw the Misfit Vapor back in January at the Consumer Electronics Show, and it was initially set to run on Misfit’s own operating system which is fully compatible with both iOS and Android. The big announcement this March though, was that it will now run Android Wear 2.0. This may be annoying news to Apple users – as although 2.0 will be more compatible with iOS, you may still lose some functionality.

With a host of exciting new launches, the arrival of Android Wear 2.0 and the fact that genuine watch designers are now joining technology companies in creating tantalising timepieces for your wrist, could 2017 be the year the smartwatch market truly takes off? Rest assured we’ll be putting these new models through their paces in our test lab to find out if beauty is only skin deep.

We put every smartwatch through a barrage of tough tests, including challenging the accuracy of any fitness tracking features and the reliability of the smart functions. The best from our tests are comfortable to wear, and are genuinely useful for keeping up with your notifications or health data. The worst have poor battery life, patchy smart functions, and inaccurate fitness tracking.

To see which devices put the smart in smartwatch, head over to our smartwatch reviews.