With this summer already seeing some record temperatures, you’ll probably be reaching for something that will shade your pushchair to protect your child from the sun.

We’ve seen claims that using a fleece or blanket as a pushchair shade can raise temperatures inside the pushchair to dangerous levels, posing the risk of overheating your child. But without a shade or cover, your child is left vulnerable to harmful UV rays and sunburn. The NHS advises keeping babies under six months completely out of direct sun, and young children’s delicate skin must be protected from the sun when UV levels are high.

Our test reveals how the temperature inside a pushchair changes when covered, and whether some materials are safer to use than others.

Find out more about baby sun shades and how to find the best one.

We measured the temperature across the space of an hour of five identical pushchairs under five different types of cover – a muslin, towel, fleece blanket, a Koo-di sun/sleep cover and a SnoozeShade – and compared them with a pushchair with the hood up.

We recorded the temperature at the start and then every 10 minutes behind each cover within the pushchair’s seat area. In conducting our tests, we used identical pushchairs for each cover, and set up the seat to be parent-facing, with the hood catching the sun.

We did the test on a very hot day – the ambient temperature at the start was 33°C and increased to 34.8°C during the time we were recording.

Is it safe to cover a pushchair? 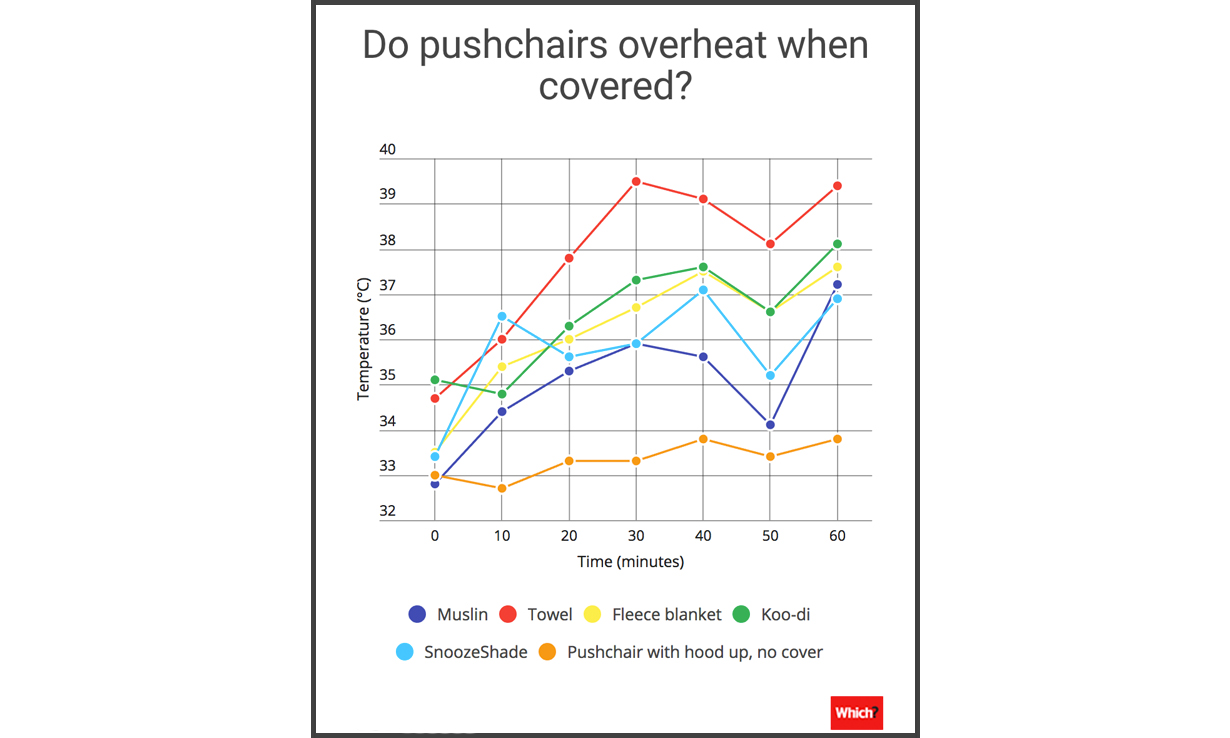 When used properly, and with constant supervision, yes. In fact, it could be unsafe not to shade your pushchair if you’re out and about in the hot sun.

But, as shown in our graphic above, all the cover types that we tested showed an increase in temperature within the seat area from the moment we added them.

Don’t let this put you off using a sun cover responsibly, though, because although the pushchair with its own hood fully up was the coolest in temperature, this set-up doesn’t offer any UV protection for your child.

Cara Sayer, founder of SnoozeShade, says: ‘Sun protection on hot days is vital, as we know that five instances of sunburn can increase your skin cancer risk by 80%.

‘The critical thing on a hot day is that if parents have to be out, then they check regularly on their child’s wellbeing, encourage regular drinking of water, get into the shade if possible and ideally use a sunshade that has been designed to block UVA and UVB safely.’

And Koo-di told us: ‘Our Koo-di Sun & Sleep Shades have been designed to provide an effective block for UVA & UVB rays, to keep your child well protected on a sunny day.

‘We would, however, never advise leaving your child in their buggy facing the sun, because any sunshade in that position will create an increase in temperature under the sunshade.

‘We recommend positioning the buggy in a shady spot to create maximum protection from the heat of the sun.’

Protecting your baby from the heat

Experts advise against keeping young babies out in the sun for too long, anyway, as they can’t sweat, so can often suffer heatstroke much more quickly than an older child or an adult. And babies can also get dehydrated more quickly.

Jenny Ward, director of services at the Lullaby Trust, told us: ‘Every baby is different so, while it’s important to be informed about overheating, you need to check your baby regularly to see if he or she is too hot.

‘Feel the baby’s tummy or the back of their neck (your baby’s hands and feet will usually be cooler, which is normal). If your baby’s skin is hot or sweaty, then this means they are too hot.’

In light of this, the most important thing to remember is to be vigilant when taking your child out in the sun. It’s important to constantly check on your child in a covered pushchair, to make sure they’re comfortable and at a cool enough temperature.

Read more of our advice on pushchair safety.