Aldi is selling a cheap stand mixer, the Ambiano Classic, just in time for the start of the Great British Bake Off. It’s a fraction of the price of the KitchenAid Artisan mixers that are a regular feature in the Bake Off tent – but can it still whip up a tasty bake?

The Aldi mixer is available in stores and online now. Like all Aldi’s ‘Specialbuy’ offers, it’s only available while stocks last.

You can see it in action in the preview video below, and get our verdict in the Aldi Ambiano stand mixer first look review.

What you get with the Aldi mixer

Available in four colours, the Aldi Ambiano Classic stand mixer has an attractive vintage look. It includes a 3.8-litre stainless-steel mixing bowl with splashguard and comes with a balloon whisk, beater and dough hook. The manual contains five basic recipes to get you started.

Is the Aldi mixer a good deal?

The capacity of the Aldi mixer is about average, and should be plenty for everyday baking jobs. The splashguard is a nice extra for the price – this can help to prevent ingredients from splattering your kitchen surfaces when mixing.

Stand mixers don’t come cheap, so finding one for less than £70 is rare. Most of the models we’ve tested cost between £100 and £200, but they can cost up to £850. KitchenAid Artisan mixers, which often play a starring role in the Bake Off tent, can set you back £500 or more.

Some cheaper stand mixers have disappointed in our lab tests though. We’ve found models that are slow or ineffective at mixing, or make a real racket when they’re in use. But that doesn’t mean you’ll have to spend a small fortune to get a good one – we’ve found Best Buys for around £150.

See which mixer gives you the most bang for your buck with our stand mixer reviews.

We’ll find out tonight which mixer is the weapon of choice in the battle to be crowned Bake Off champion 2017. Could it be one of the new releases from baking heavyweights Kenwood or KitchenAid? 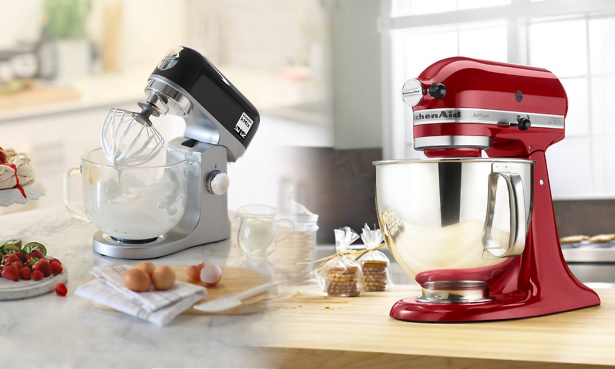 The Kenwood kMix KMX754 mixer has a smart speed control, which means it will start mixing slowly to avoid splattering ingredients around, and gradually build up to the speed you set on the dial. It also has a glass bowl for better visibility, and comes in four colours. At £430, it’s quite an investment. Read the full Kenwood kMix KMX754 mixer review to see if it’s worth the money.

KitchenAid has also updated its iconic Artisan 150 stand mixer. The new KitchenAid Artisan KSM175 comes in a huge range of 21 colours and stylistically is pretty similar to the old model. It has two mixing bowls – one with a 4.9-litre capacity and an additional 3-litre bowl for smaller mixing jobs. Both this and the two other new KitchenAid mixers we’ve tested cost more than £400. Get our verdict on their mixing skills in our KitchenAid mixer reviews.

We found two new mixers that beat both Kenwood and KitchenAid in our latest tests – and they’re cheaper too. Check our list of the best mixers for 2017 to find out which models made the grade.