Morrisons has won the contest for cheapest supermarket of 2017.

It squeezed ahead of last year’s winner, Asda, for the cheapest basket of branded groceries in our price comparison.

Our hypothetical basket of branded groceries contained 75 items, from PG Tips teabags to Warburtons bread, and cost an average of £142.76 at Morrisons over the course of the year. This average was just four pence more at rival Asda, where it came in at £142.80.

Waitrose was the most expensive supermarket for the second year in a row. The same branded items would have cost an average of £154.01. That’s £11.25 more than Morrisons.

We quiz thousands of shoppers every year to discover what they really think of the supermarkets they shop in. Find out which were rated the best and worst supermarkets.

We tracked the prices of 75 popular products sold in the six supermarkets covered by the comparison: Asda, Morrisons, Ocado, Sainsbury’s, Tesco and Waitrose.

Using data from the independent shopping website MySupermarket, we calculated the average price (including discounts, but not multibuys) for each item across the whole of 2017.

We added those individual averages up to get the cost of the basket at each shop. See how your favourite supermarket compares here: 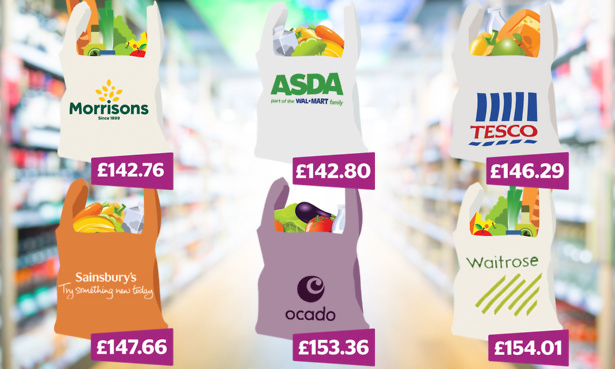 While this data covers the whole of 2017, we also look at the cost of the basket each month, using a similar method. Morrisons was champion here too in 2017, coming top seven times.

With 2018 bringing rising prices and more inflation, make sure you keep ahead of the cheapest supermarket every month with our supermarket price comparison.

The average household spent a record £1,054 on groceries in the last three months of 2017, according to new figures from retail analysts Kantar Worldpanel. The Friday before Christmas – December 22 – was the busiest shopping day ever recorded, with supermarket shoppers spending £747m.

Fraser McKevitt, head of retail and consumer insight at Kantar Worldpanel, comments: ‘Overall supermarket sales increased in value by 3.8%, with an additional £1bn ringing through the tills compared to the same festive period last year.’

Some festive treats were clearly more popular than others. Mince pie sales, for example, rose by 13.2% compared with the same period in 2016.

Despite this, we still seemed determined to splash out for our festive feasts: we spent a record-breaking £469m on premium, own-label groceries in December alone.

The research also found there were fewer promotions than usual. In fact, promotions were at their lowest level in eight years.

Here at Which?, our research in 2017 awarded four supermarkets Best Buys for their own-brand products.

Find out which Best Buy products to buy at each supermarket by reading their full reviews: Aldi, Asda, Sainsbury’s and The Co-op.