We’ve named Moonpig’s 12 Red Roses the best online bouquet for Valentine’s Day 2018, after putting seven of the biggest florists in the UK through their paces in a head-to-head Which? test.

With Valentine’s Day just around the corner, we selected seven bouquets containing predominantly red or pink roses, priced between £20 to £40, for our snapshot study.

Once they’d been delivered, the team, led by Ceri Thomas, Which? Gardening editor, judged each bouquet on how well it matched its online description, the suitability of its packaging and care instructions, aesthetic appeal, the quality and condition of the flowers, how well the flowers lasted after one week and value for money.

Taking all of these factors into consideration, we’ve ranked the bouquets from best to worst in the list below: 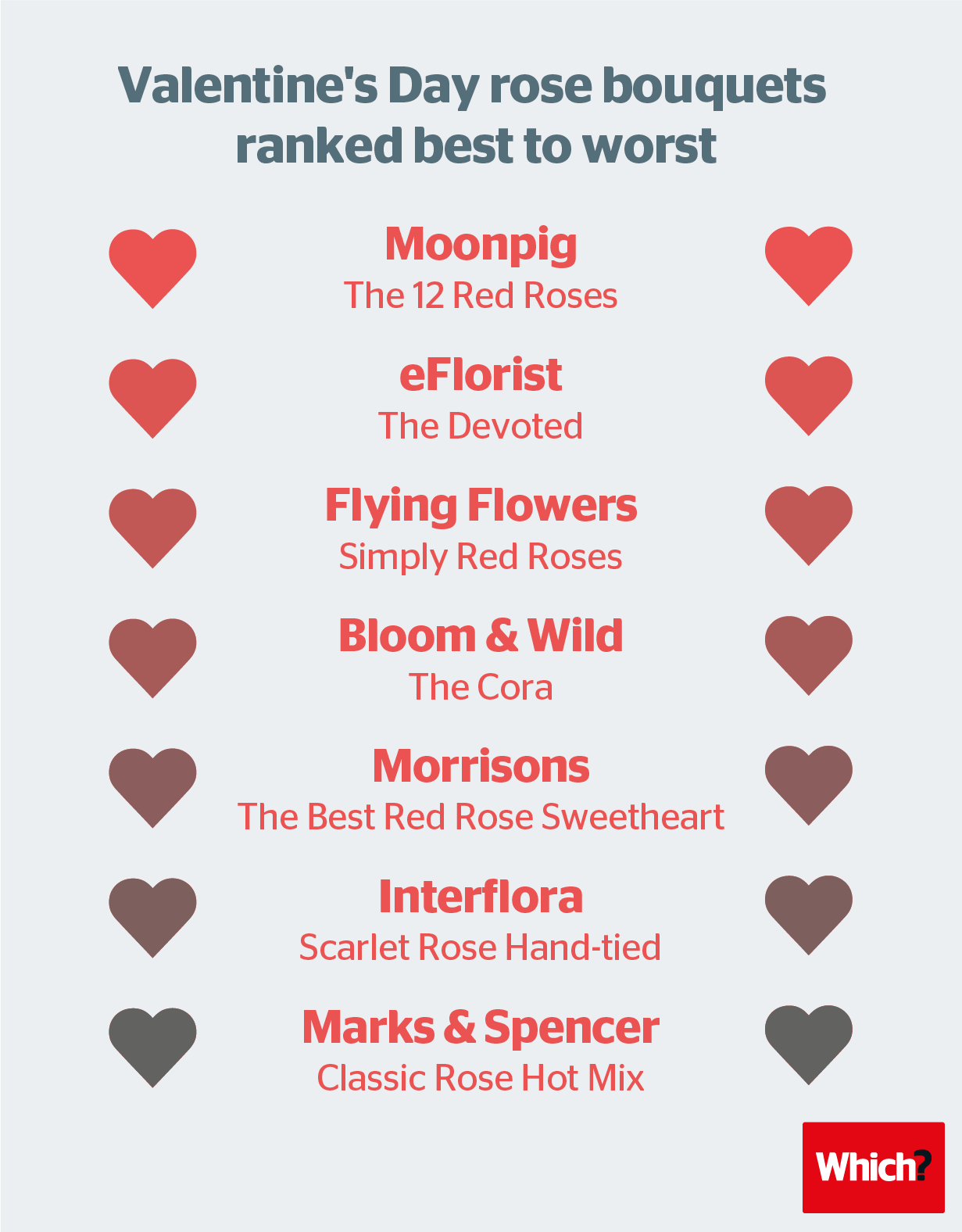 If you think your loved one would prefer a glass of fizz to a dozen roses, head to our food and drink taste tests instead, where we’ve ranked the best Champagne and best prosecco that you can buy in UK supermarkets.

Best of the bunch

At the top of the league is The 12 Red Roses, from Moonpig. These flowers were still big and fresh after a week indoors, and at £28, with free delivery, they were great value for money. In fact, this was the second cheapest bouquet we ordered.

The colour of the roses we received was slightly darker than those shown online, but on the whole we were very impressed. Plus, the bouquet arrived early in the day and the website was easy to use, so the ordering process was smooth and quick.

Slide across to see how the bouquet we received compares to its online image:

The second-best roses came from eFlorist. The roses in its Devoted bouquet were still blooming and vibrant red seven days after it arrived, though some of its leafy foliage died off during its week in our office.

Slide across to see how the roses changed over the week:

At the bottom of the pile was the Classic Roses Hot Mix bouquet from Marks & Spencer. While the bunch was generally perky and vibrant, some of the roses were damaged when they arrived. By the end of the week most of the flowers had wilted and drooped. They also arrived an hour later than promised.

M&S also has special Valentine’s red rose bouquets, which are only available for delivery between 10-16 February.

Slide across to see how the roses deteriorated over the week:

While these roses were promising on arrival, after seven days they were well past their best. In fact, our gardening expert thought most people would probably have been tempted to throw them away before the end of the week.

The website is a little clunkier to use than the others we ordered from, but delivery was straightforward.

Slide across to see how the flowers compared with their online image after a week in our test:

This pretty bouquet was ranked third by our gardening expert. Its vibrant roses continued to open up over time, and lasted the full week. These roses came with frothy gypsophila – an Eighties throwback that might not be to everyone’s taste.

Bloom & Wild’s contemporary range is designed for convenience – these flowers arrive flat-packed so that they can be posted through a letter box.

It’s a handy feature if you don’t think your loved one will be at home for the delivery, but it did mean that The Cora needed to be carefully arranged when it arrived, which our expert thought might not be ideal for everyone.

The ‘blueberry’ roses that arrived were a brighter pink than their online images, which looked more red, though we didn’t mark them down for this. The head of each rose was delicately wrapped in a protective cover, which meant they survived the journey well. Sadly, though, the flowers didn’t last as long as we would have liked.

Slide across to see how the flowers that arrived compared to their online description:

These blooms were big, vibrant and very impressive on arrival, and came with lots of eucalyptus to bulk out your vase. As its website promises, they continued to blossom after arrival. Disappointingly, though, they later deteriorated, and were on their way out by the end of our week-long test.

Slide across to see how Morrisons’ flowers deteriorated over the week:

How we compared the bouquets

Which? Gardening editor Ceri Thomas assessed each bouquet on arrival and then again for longevity after one week, during which we looked after them as per the instructions on their packaging. To impress Ceri and the team, the bouquets had to look similar to their online image, with fresh, vibrant blooms that were still lively a week after delivery. We also assessed the quality and condition of the flowers, the suitability of their packaging, and their value for money.

While we researched delivery options and the ease of use of each website, these factors didn’t affect the overall ranking of each bouquet.

While online deliveries are great for sending flowers to loved ones who are further afield, if you’re hand delivering your bouquet you’re better off shopping in person, says Ceri. ‘Valentine’s bouquets are cheaper in the supermarkets,’ she says, ‘where you can assess their quality on the spot. Plus, you’ll see your Valentine’s happy face when they receive them!’

Looking for a bargain? When we looked, Lidl and Aldi were both selling a dozen roses in-store for £5, while Morrisons had a rose bouquet for £3 and Marks & Spencer had one for £5.

Find out how we’ve rated UK supermarkets in our guide to the best and worst supermarkets.

What to do when it goes wrong

If you’ve paid for flowers that weren’t up to scratch when they arrived, or haven’t lasted as long as you’d expected, you may have the right to a refund – particularly if they came with a freshness guarantee.

You are protected by the Consumer Rights Act when you buy anything online, including flowers. If flowers arrive in poor condition, are not as described or don’t arrive at all you are entitled to a full refund.

Visit our page on your rights when you buy flowers to find out more.