The thought of picking up a shiny new Apple iPhone X or Samsung Galaxy S9 for under £300 sounds too good to be true – and it is.

We’ve spotted cheap ‘clone phones’ for sale online that look identical to premium smartphones from big-name brands. Out of the box you’d think you had your hands on a high-end mobile, but turn the device on and you’ll soon realise all is not as it seems.

Here we dive into the world of imitation smartphones, exposing the dangers of buying cheap tech and offering tips on how to spot a fake mobile if you’re buying second-hand.

One of the more recent additions to the Goophone website is the Goophone X, a copy of Apple’s iPhone X. Unlike the original, it runs on Android and starts at £224 – that’s over £700 cheaper than a new iPhone X.

But it certainly won’t offer the same user experience. The Goophone X has a lower-resolution display (so images won’t look as detailed), less internal storage and less Ram, which means it won’t cope with multitasking like the Apple mobile does.

Even smartphones that aren’t officially released have made their way to the Goophone website. The Goophone S9 (below) is a copy of the Samsung Galaxy S9 and sells for under £300.

This isn’t the only company actively making clone tech, either. A quick Google search will bring up similar products – you’ll even find a range of smartwatches designed to trick people into thinking you’re wearing a pricey Apple Watch.

Should you buy a Goophone?

If you like the look of an expensive Apple or Samsung smartphone but don’t fancy spending big, could the Goophone be a solid alternative?

If you trust the reviews on the official Goophone website, it would appear to be. But you might well question their legitimacy. There are 10 products featured on the company’s homepage, and we counted 211 5-star reviews and 27 4-star reviews.

None of the reviews on the Goophone website award less than a 4-star rating.

If it’s an affordable but capable smartphone you’re after, it’s more risky to buy from an obscure seller. Thankfully we’ve seen plenty of budget-priced smartphones in our test lab from giant brands including Huawei, OnePlus, Motorola and Sony. To see which cheap smartphones have earned Best Buy status, see our guide on the best cheap mobile phones.

How to spot a fake smartphone: 5 things to look out for

Goophone isn’t claiming that it’s selling real iPhones, but fake tech does exist online. If you’re buying through eBay or from a lesser-known website, be careful: order from a sneaky seller and you could end up with a fake that’s described as the real deal.

Take a look at our tips on how to check if your tech is genuine: 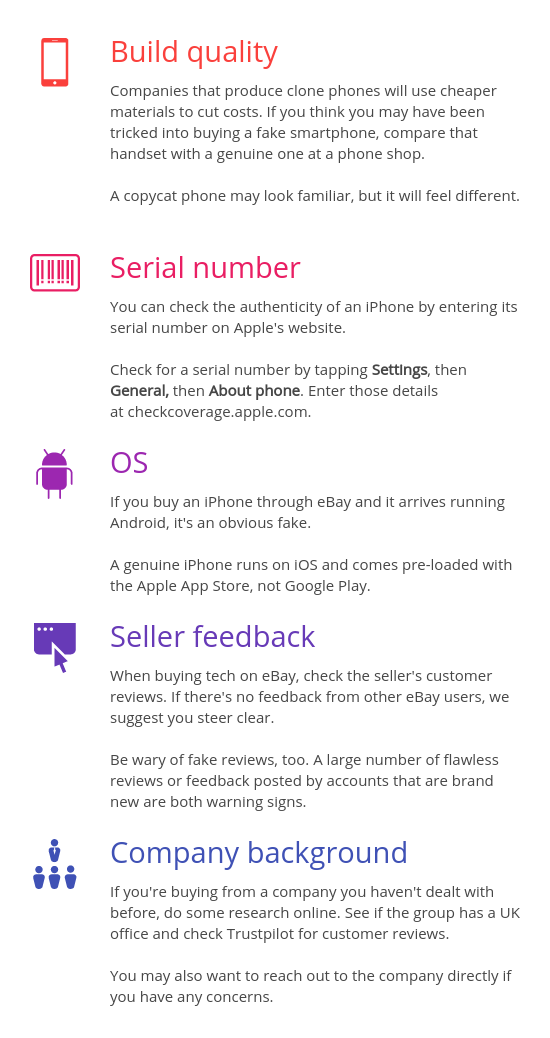 If you’ve ended up buying fake goods, the trader that sold it to you may have committed a criminal offence.

For more details on reporting faulty goods and securing a refund, see our advice guide on how to report fake goods or counterfeit products.