It’s the battle of the family cars – popular stalwarts the Honda Jazz and Volkswagen Golf going head-to-head, with the Honda Civic and Vauxhall Astra snapping at their heels.

Plus there’s cheaper rivals from Seat and Skoda looking to save you money, and a family-suitable BMW looking to do the opposite. But which one will come out on top in our tests?

Family cars must be practical with plenty of space, but they should also be fun, safe and economical to drive. To find out which is best, we’ve re-driven the Honda Jazz, which has been facelifted this year, to see whether it is still an ideal family car with class-leading space from its ‘magic seat’ system.

We’ve also revisited the Honda Civic, which now comes with the option of a 1.6-litre 120hp diesel engine.

Add to this we have reviews with full lab test results for the VW Golf, Seat Leon, Skoda Rapid Spaceback, and Vauxhall Astra. And, for those looking for added style and performance, we’ve also reviewed the BMW 4 Series Gran Coupé.

Just want to know which cars are best? Skip straight to our top cars to buy in 2018. 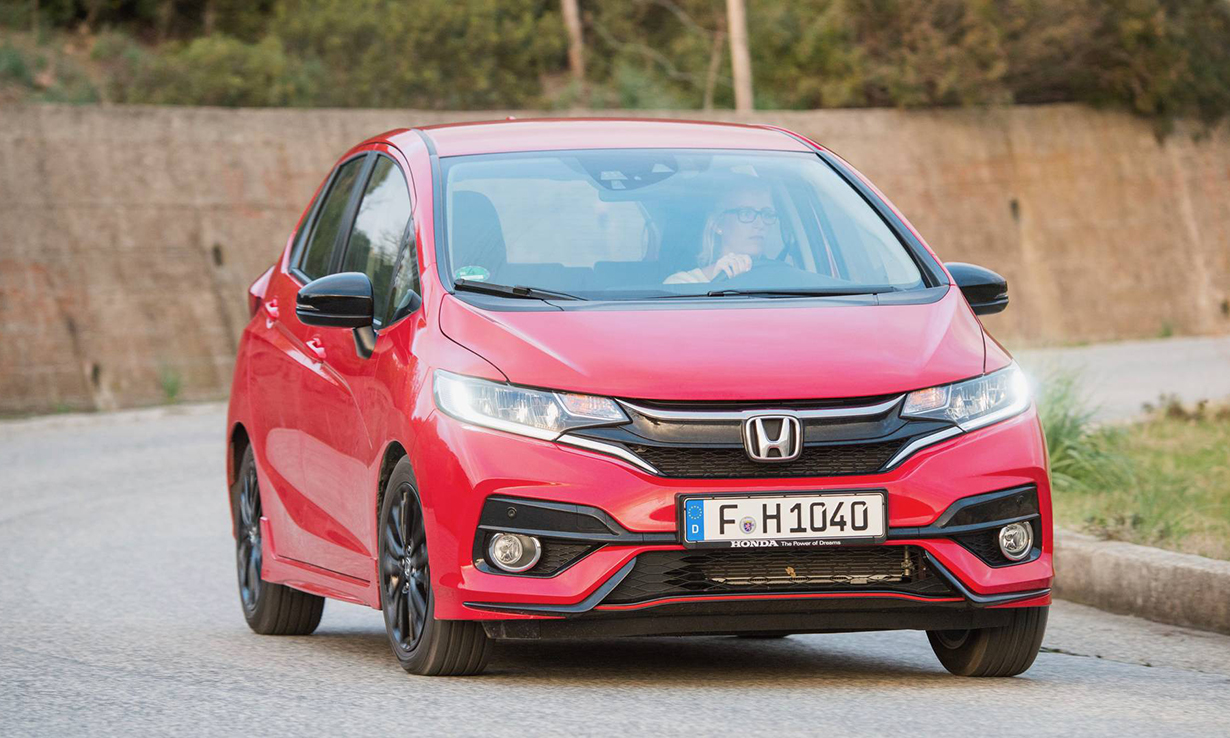 The Honda Jazz  has a reputation for being one of the most practical small cars you can buy, with class-leading space and Honda’s ‘magic seat’ system to fully flatten down the rear seats and create cavernous extra boot space. This means the Jazz has the load space to match much larger cars.

At its 2015 launch, the Honda Jazz only had the option of a 1.3-litre petrol engine. Now, with its 2018 facelift, this has been joined by a 1.5-litre ‘Sport’ model for extra power. Honda has also revised the exterior styling of this third-generation Jazz, and bestowed it with additional equipment. All models now come with cruise control, LED headlights and City Brake Active automatic braking.

But with the Jazz coming at a premium by small-car standards, is it fun and fuel efficient to drive? Find out in our updated Honda Jazz review. 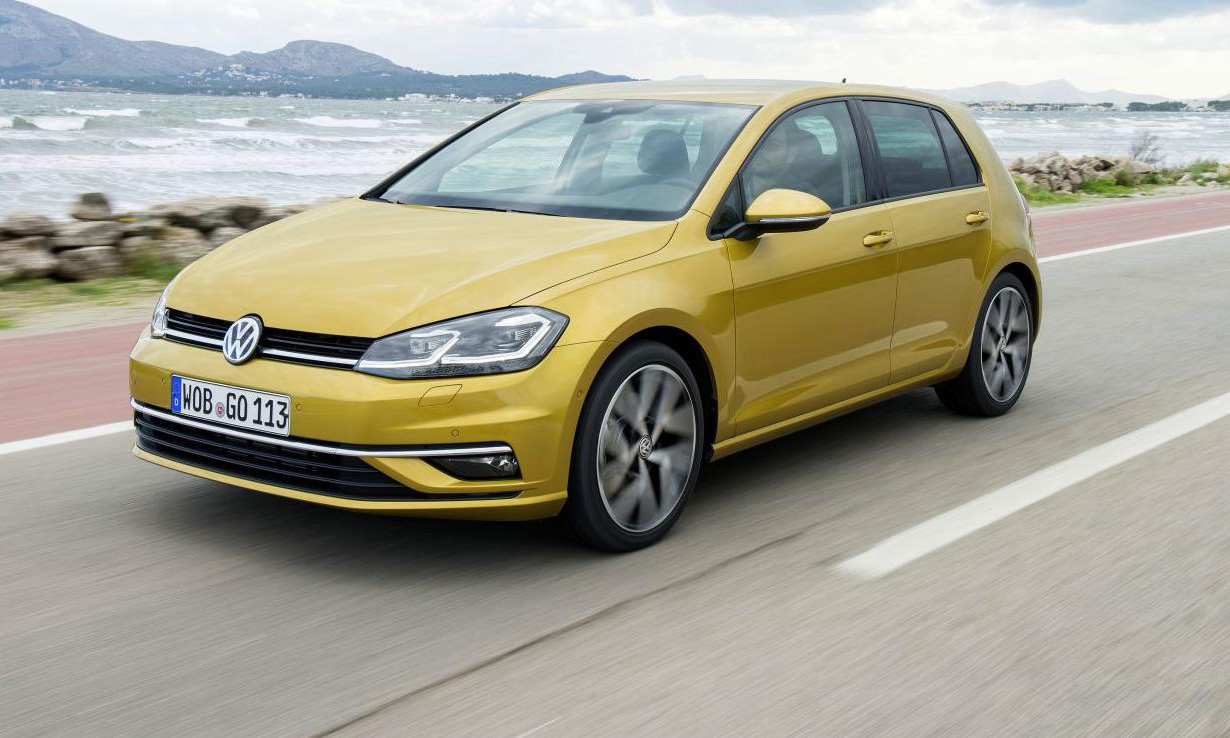 The VW Golf is one of the most recognisable cars on the road, with the seventh-generation launching in 2013.  It was updated in February 2017, which hardly changed the look except to give it new bumpers and full LED lights.

But the tech inside was greatly upgraded to the latest digital norm, with a new touchscreen system that removes almost all physical buttons, as well as adding gesture control.

There’s a wide choice of petrol and diesel engines, with 2017 bringing a new generation of TSI petrol engines with the Golf 1.5 TSI. VW’s semi-automatic DSG gearbox also gained an extra ratio in 2017, upping it to seven speeds.

The Golf shares much of its DNA – including engines and the MQB platform – with the Audi A3 – so could this be a better-value alternative to the Audi?

Find out whether the Golf can beat the Jazz to the top spot in our Volkswagen Golf review.

If you know you want a Golf, but you’re looking for something a little different, Volkswagen’s got you covered. Take your pick from: 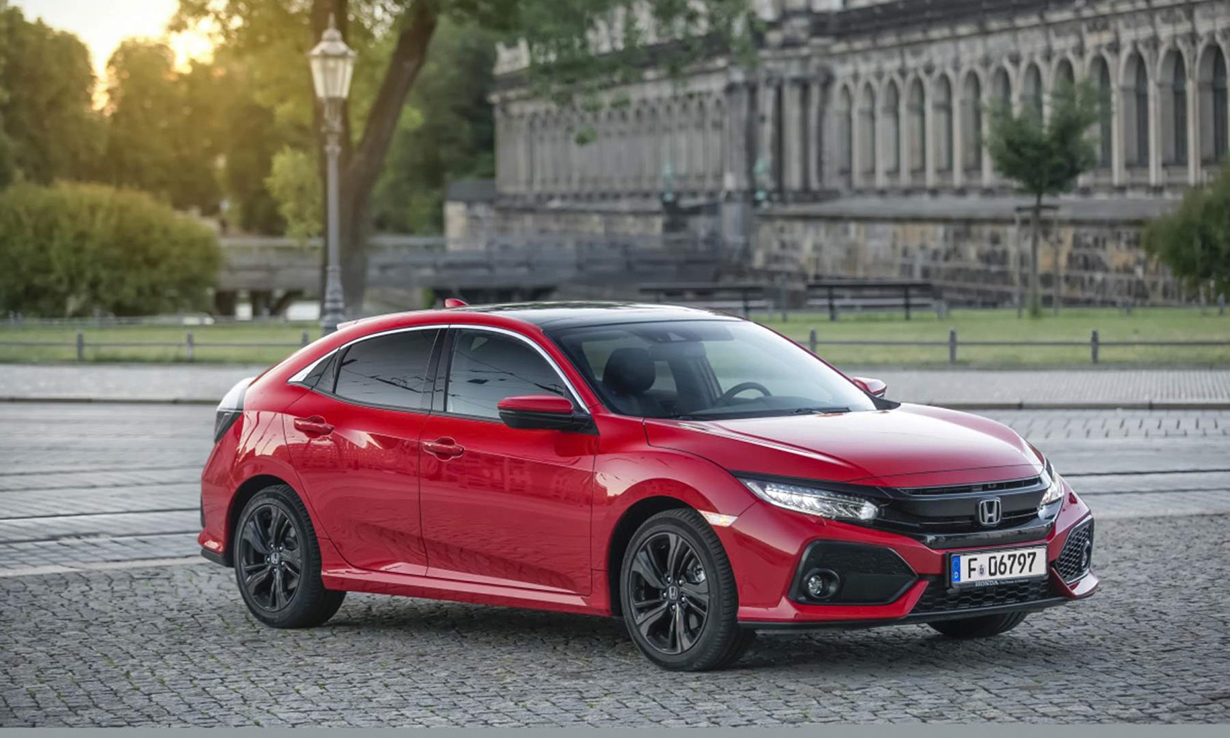 The strong-selling Honda Civic has gone through one of the greatest number of generations of any car on sale in the UK, with the all-new 2017 version hitting a landmark 10th generation.

It’s gone bold for the occasion, with strong styling, as it looks to stand out from key rivals the Volkswagen Golf and Toyota Auris.

A clear distinction has emerged between the Civic and the Jazz, with the former prioritising a sportier drive. This generation’s different rear suspension means the Civic has lost the Honda Jazz’s folding ‘magic seat’ system, though.

You used to have only three turbocharged petrol engines to choose from – a 1.0 litre 129hp three-cylinder engine, 1.5-litre four-cylinder 182hp one and the 320hp Type R performance model.

March 2018 has brought along a diesel 1.6-litre alternative with 120hp. So we’ve given it another drive to see how it’s developed since our original assessment.

So does the Civic remain a great family choice with a roomy inside and is it more fun to drive than the Jazz? Find out in our comprehensive Honda Civic review. 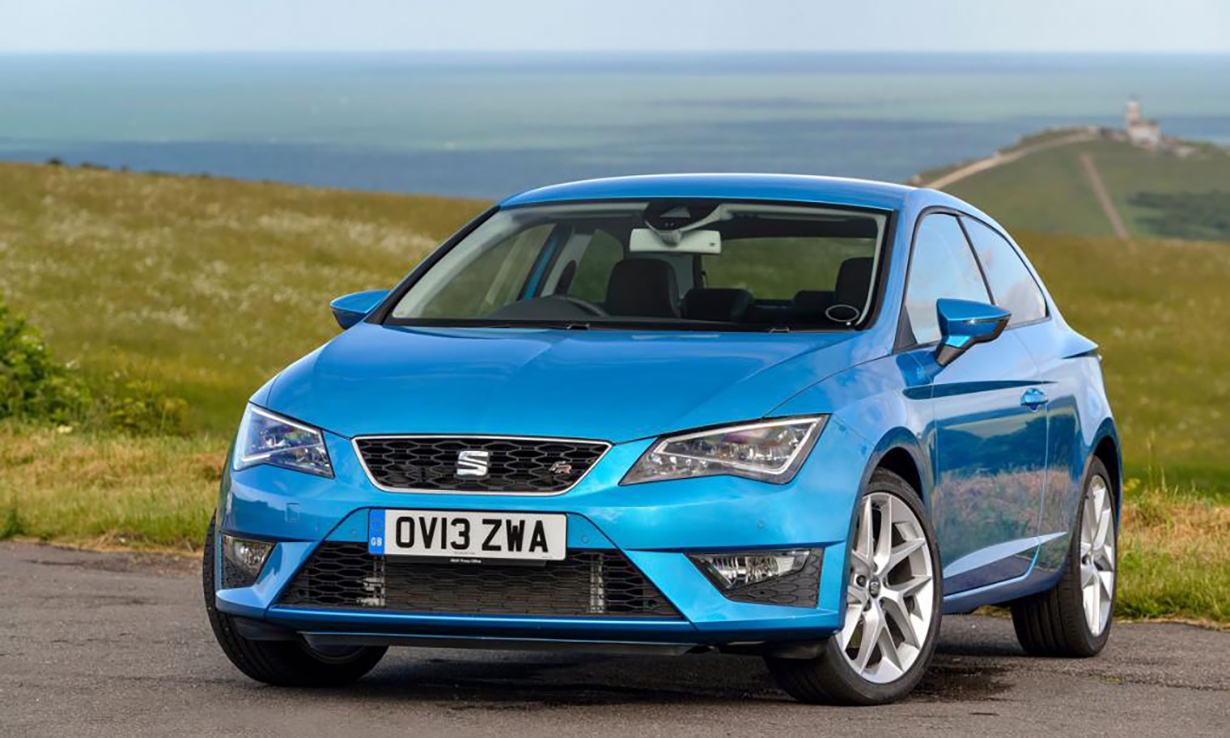 The Seat Leon medium hatch medium hatch has a tough job on its hands to compete against class-leaders the VW Golf and Ford Focus. Especially since it shares its underlying Volkswagen Group MQB platform with the Golf.

But it has a different character, with a youthful design that makes it arguably better looking than the Golf, plus a range of engines with bite.

First launched in 2013, the Seat Leon was facelifted and updated in 2017, adding the same full LED lights, touchscreen and gesture controls as the Golf got in its 2017 upgrade.

The Leon comes in five- and three-door hatch versions and as a Seat Leon estate and Leon Cupra hot hatch. You get a choice of five trim levels: S, SE Dynamic, SE Technology, FR and XCELLENCE.

The Seat Leon is cheaper than the VW Golf, but has so much in common. So is it the better choice and safe and enjoyable to drive? Find out in our expert Seat Leon review. 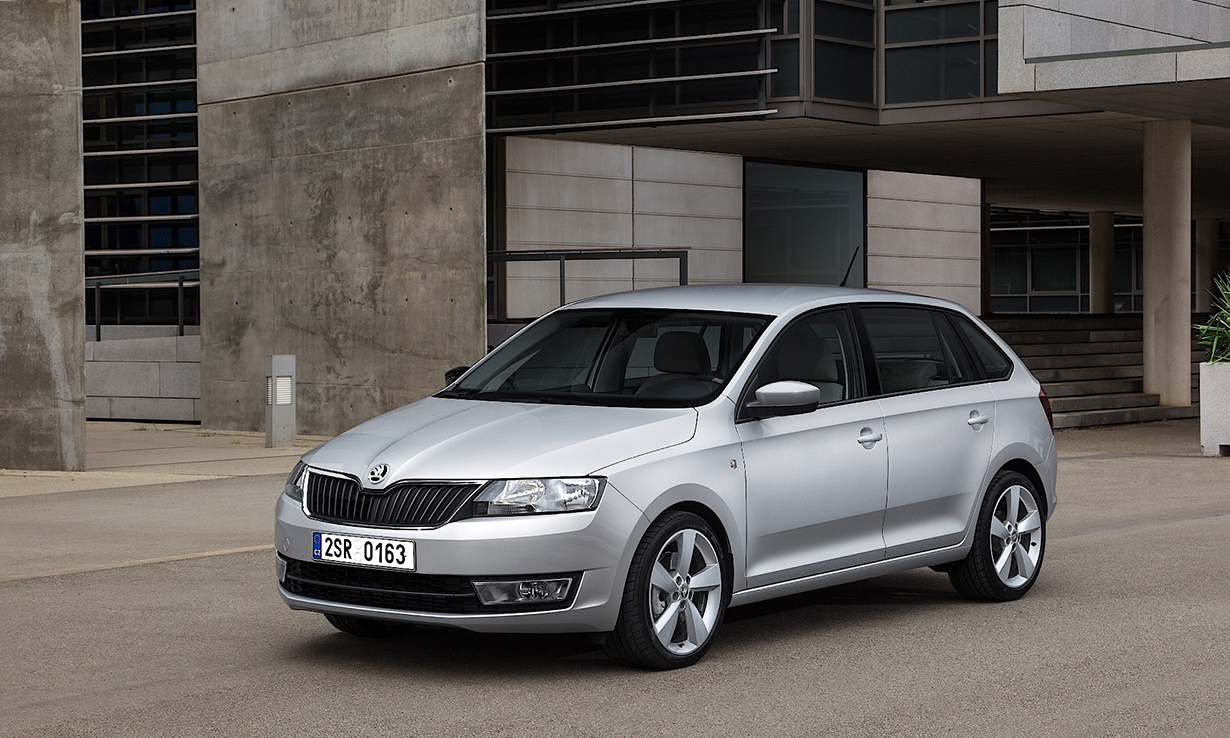 Another member of the Volkswagen Group family, the Skoda Rapid Spaceback borrows elements from the VW Polo and VW Passat, to keep costs low and maximise interior space, respectively. But does this result in a cobbled-together mess?

The Rapid Spaceback is the compact estate version of the ‘regular’ Rapid, but the Spaceback is actually arguably the more ordinary of the two. The standard Rapid is a hatchback that looks like a saloon – similar to the BMW below – and exists between the smaller Fabia and larger Octavia in Skoda’s range.

The Spaceback differentiates itself from the pack with a sloping roofline and huge interior space, and was facelifted in 2017 with a new design. It now has bi-xenon headlights and a redesigned cabin as well.

Petrol engines have also been changed to 1.0-litre TSI engines with three cylinders (with 95hp or 110hp).

Find out whether this is the way to get big space on a budget in our extensive Skoda Rapid Spaceback review. 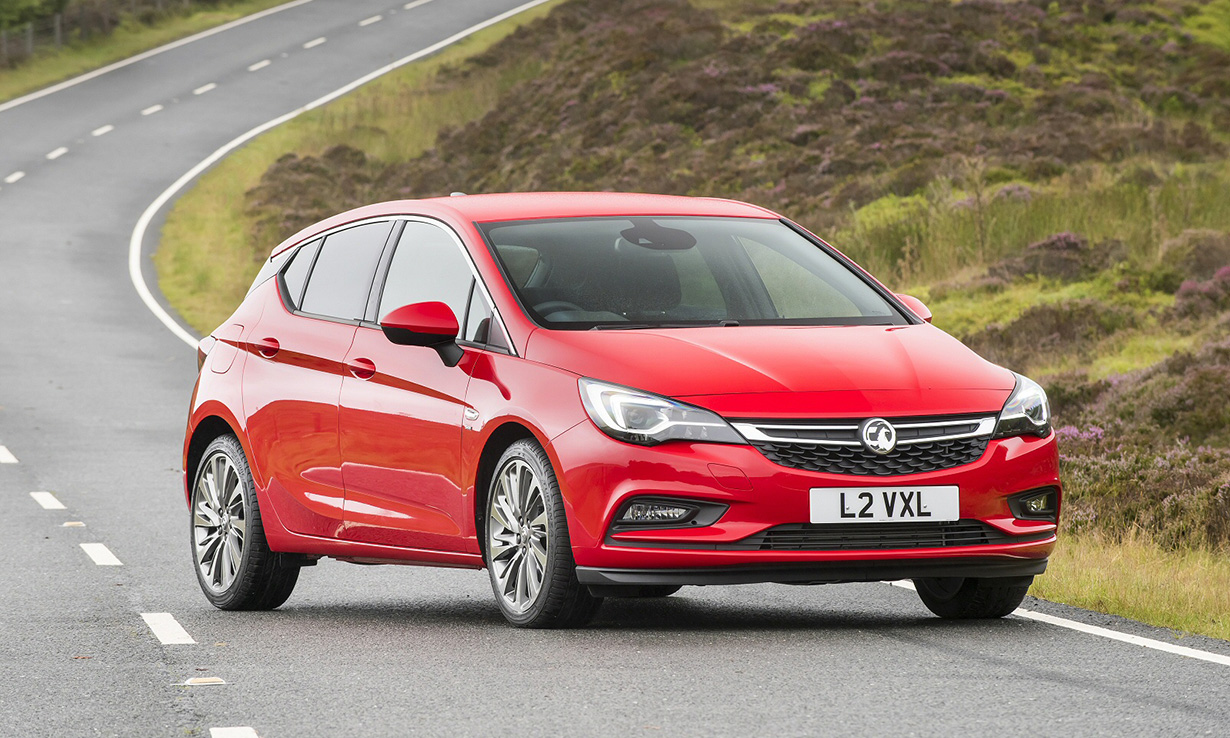 Launched in 2015, the seventh-generation Vauxhall Astra hatchback paradoxically manages, through its new design, to be smaller and lighter yet be more spacious than its predecessor.

But the British-built Astra needs to have upped its game significantly to close the gap on class-leading rivals, despite being one of the UK’s biggest-selling hatchbacks and firmly embedded in the mainstream.

In addition to the five-door hatch, it’s also available as an ST ‘Sport Tourer’ estate. 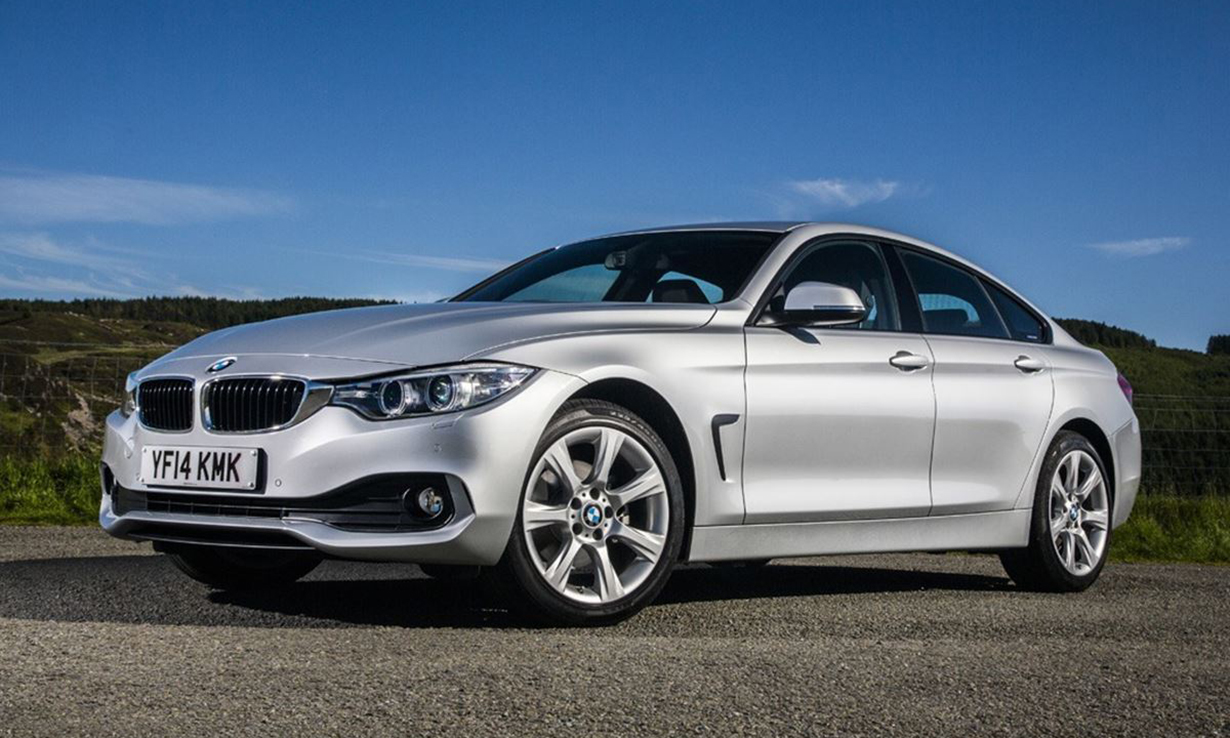 If you’ve searched this far down and not been inspired, perhaps this BMW is just the ticket for you and your family.

Based on the two-door 4 Series Coupé (itself based on the four-door 3 Series), the Gran Coupé looks striking, with its low, sweeping roofline and lower, wider profile than the 3 Series saloon.

You get sporty coupé looks with five-door practicality, with strong petrol and diesel engine choices to boot. You can also get it in xDrive all-wheel drive.

A mid-life refresh in 2017 brought with it updated styling, an enhanced infotainment system, engine upgrades and stiffer suspension for an even more involving drive.

Look no further to discover whether this is your ultimate family driving machine – see our BMW 4 Series Gran Coupé review.

The Highway Code changes for 2022: are you aware of the new rules?