Sainsbury’s has won the battle to be the cheapest supermarket for May 2019, beating April’s winner Morrisons by just 45p. The Sainsbury’s basket of 63 popular branded items cost £127.03 compared with £127.48 at Morrisons.

It’s the first time that Sainsbury’s has been the cheapest supermarket of the month since February; Morrisons claimed the accolade in March and April.

In May, both supermarkets were cheaper than third-placed Asda by more than £5 – the same basket of groceries would have cost £132.60 there. 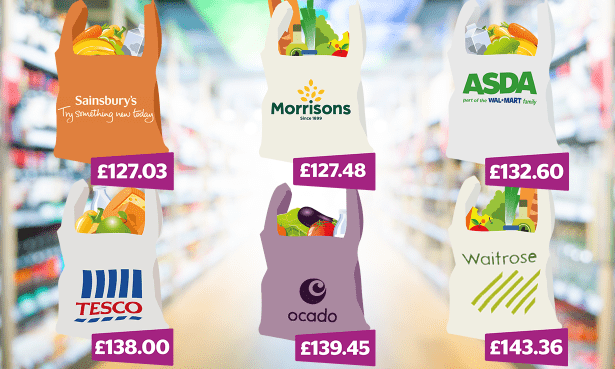 At nearly £9 more expensive, Tesco took fourth place, as it has done for every month of 2019 so far. The UK’s largest supermarket chain can’t compete with Sainsbury’s, Morrisons or Asda for price, although it is consistently cheaper than Ocado and Waitrose for the same basket of goods.

Waitrose was the most expensive supermarket for May, and our basket of groceries would have cost £143.36 – a hefty £16.33 more than at Sainsbury’s. Buying at online-only Ocado would have set you back £139.45.

It’s not all about price, though – find out which supermarkets are rated highly by their customers for product range and quality in our survey of the best and worst supermarkets 2019.

Each month, we track the prices of popular branded products. In May our basket of 63 items, all sold in the six online supermarkets, in the comparison included Alpen muesli, Andrex toilet roll, Cathedral City cheddar cheese and PG Tips tea bags. We check prices at each of:

Using data from the independent shopping website MySupermarket, we calculate the average price (including discounts, but not multibuys) for each item throughout the month. We add up the individual averages to get the monthly cost of the identical basket at each store.

Head to our supermarket price comparison to see our pricing data for previous months and years.

Aldi – the German discounter has announced a new trial to replace plastic bags with biodegradable and paper ones in its stores across the UK. Half of its stores will offer paper bags, while the other half will offer compostable carrier bags from July.

Sainsbury’s – from September, Sainsbury’s will get rid of plastic bags for its loose fruit, vegetables and bakery items, replacing them with paper bags. Customers will be able to bring their own containers, too.

Sainsbury’s has also pledged to remove plastic cutlery from its stores, as well as plastic trays for asparagus, sweetcorn, carrots and tomatoes, plastic lids for cream pots and plastic sleeves. The move is part of the retailer’s aim to cut 1,000 tonnes of plastic this year. 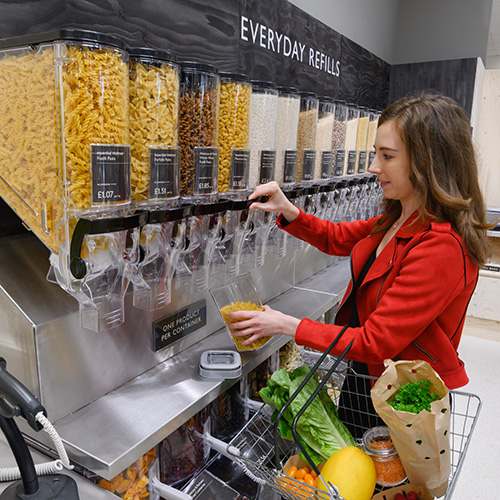 Waitrose – a branch in Oxford is trialing plastic-free shopping by allowing customers to bring in their own refillable containers for fruit and veg, pasta, cereals, coffee and even wine.

A Which? researcher visited the store last week, and compared prices between Waitrose Unpacked products and their packaged equivalents on Waitrose.com. Find out more in our story Waitrose Unpacked – is packaging-free food budget friendly?

For more information about environmental moves by supermarkets, check out our guide to what supermarkets are doing about plastic.