At £138.12 for a basket of 66 grocery items, Sainsbury’s beat Asda and Morrisons to be the cheapest supermarket in July 2019.

It’s the third time in 2019 that Sainsbury’s has been the cheapest supermarket in our monthly analysis, compared to twice each for Asda and Morrisons.

Waitrose was the most expensive supermarket for the same basket of groceries for the fifth month in a row.

At £151.66 it was £13.54 more expensive than Sainsbury’s – that’s enough of a difference for Sainsbury’s shoppers to pick up a bottle of Best Buy sparkling wine and still have change. 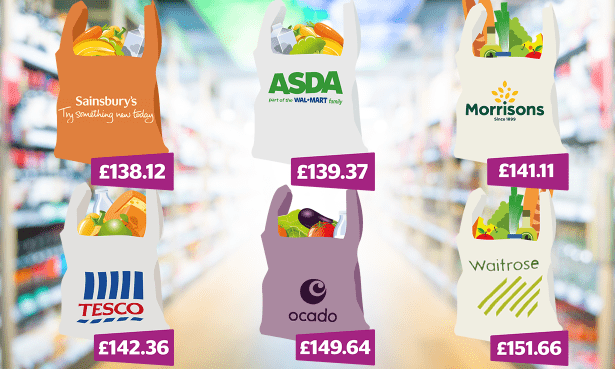 Asda closely followed Sainsbury’s to claim the title of second-cheapest supermarket, at £139.37, while Morrisons (£141.11) wasn’t far behind.

Tesco was the fourth-cheapest supermarket, a position the supermarket giant has occupied for six of the seven months we’ve had so far this year.

We check prices at:

Using data from the independent shopping website MySupermarket, we calculate the average price (including discounts, but not multibuys) for each item throughout the month.

We then add up the individual averages to reveal the cost of an identical basket at each store.

Find out more: our supermarket price comparison guide shows how prices have changed in previous months and years.

What else is going on in the world of supermarkets?

A complaint by Tesco about a Lidl Northern Ireland advert has been upheld by the Advertising Standards Authority (ASA).

Published in the Belfast Telegraph in January this year, the ad showed two supermarket trolleys filled with different products. Text above one trolley said ‘Lidl £67’, and above the other it said ‘Tesco £113’.

Tesco complained that the ad misled shoppers by comparing branded products sold at Tesco with Lidl’s own-brand products, even when in some cases Lidl sold the branded product or Tesco had an own-brand equivalent.

Upholding Tesco’s complaint, the Advertising Standards Authority (ASA) said consumers would expect the comparison to have been made between the most comparable items.

The partnership will replace Ocado’s current relationship with Waitrose, and will mean 6,500 M&S products are available on ocado.com, including new ranges.

M&S fans will have a while to wait, though: due to Ocado’s current partnership with Waitrose it won’t begin selling M&S products until September 2020.

In a bid to encourage customers to save money and collect bonuses ahead of the festive season, Asda has launched a new Christmas savings card.

Customers can pay money into an account linked to their Christmas Savings Card over four months, and for every £30 saved they’ll receive an extra £1.

That works out at 3.33% – a better rate than you’ll get from any UK-wide cash Isa or savings account at the moment.

Find out what other supermarkets offer: best and worst supermarket loyalty cards

Barely a week goes by without a supermarket announcing its latest initiative in the war on plastic. Here are the highlights from the last month.

Waitrose expands packaging-free trial: in June a Waitrose branch in Oxford began trialling plastic-free shopping, allowing customers to bring in their own refillable containers for fruit and veg, pasta, cereals, coffee and even wine.

After an ‘incredible’ reaction from customers, Waitrose has announced the Unpacked trial will be extended to three more shops in Gloucestershire and Oxfordshire from September – Abingdon, Cheltenham and Wallingford.