Lidl was the cheapest supermarket in June, according to the latest Which? analysis.

We compared prices for a trolley of 78 items, including groceries and household essentials. On average, shoppers would’ve paid £72.02 at Lidl, which narrowly beat rival discounter Aldi by just 21 pence (£72.23).

Meanwhile one mainstream supermarket was a whopping £40 more expensive than Aldi and Lidl. So which was it, and how do the other big grocers compare?

Here, we compare supermarket prices across all the big names and explore whether a lack of special offers since lockdown is to blame for increased grocery bills.

How do supermarket prices compare?

Throughout June we checked the prices of 78 items, including own-brand products such as pasta, olive oil and salad tomatoes, as well as branded goods like Hovis wholemeal bread, to see how UK supermarkets compared.

In April and May we were unable to include Aldi and Lidl as they don’t list all of their prices online and, due to lockdown, we were unable to send researchers into stores to check prices. But in June, with lockdown restrictions beginning to ease, we were able to start checking prices in stores again.

Unsurprisingly, the discounters have returned to the top of the cheapest supermarkets league table this month. Lidl pipped Aldi to the post, with just 21 pence difference between the two.

Asda was the cheapest ‘big four’ supermarket, with our trolley of items costing £80.15, while upmarket Waitrose was nearly £40 more expensive than the discounters at £111.77. 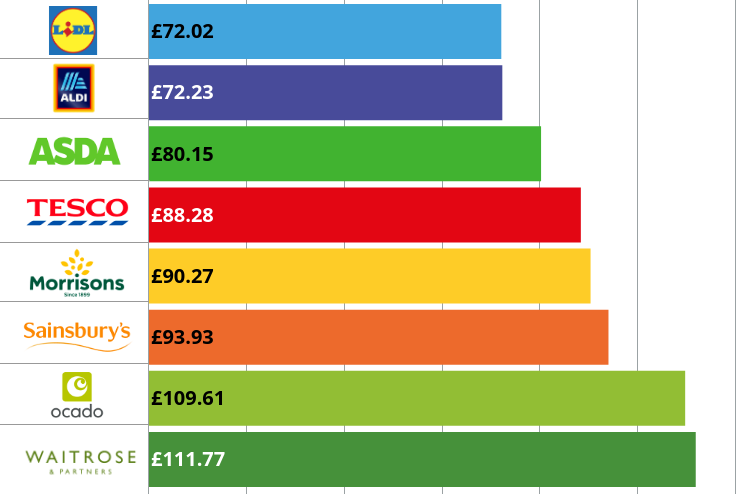 How do bigger shopping lists stack up?

We also compared a shopping trolley packed with 175 items (the original 78 plus 97 more). This included a greater selection of branded items, such as Branston baked beans and Flash cleaning spray, that aren’t typically available all year round in the discounter supermarkets.

Asda, at £299.78, was by far the cheapest of the traditional supermarkets. It was a staggering £103.04 cheaper than online-only Ocado – the greatest difference in prices that we’ve seen to date.

Grocery prices at Morrisons, Sainsbury’s and Tesco were similar, with around £12 separating the three supermarkets. 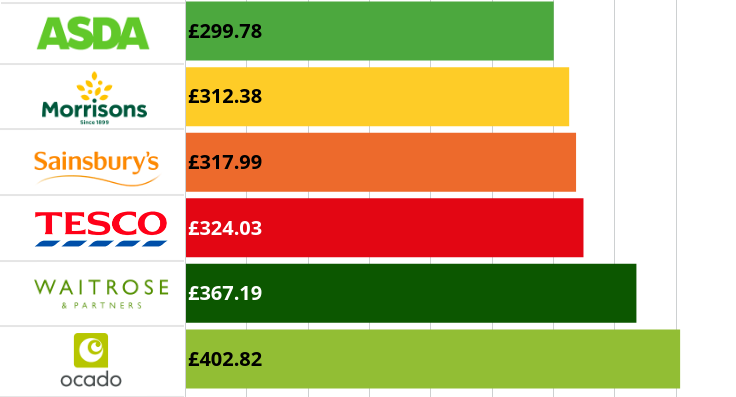 We can’t compare exactly the same items each month because products aren’t always available at every retailer, but Asda was also the cheapest major online supermarket when we checked in May.

We tracked the prices of 78 items at the UK’s six biggest supermarkets throughout June. For our larger trolley analysis we added a further 97 items for all supermarkets apart from Aldi and Lidl, where the products were unavailable.

On our shopping list were own-brand items such as pasta, lettuce and milk, as well as branded items such as Kenco Millicano coffee, Oxo stock cubes and Twinings English breakfast tea.

Using data from an independent price comparison website, we calculated the average price (including special offers but not multibuys) for each item throughout the month. We added those individual averages together to give an overall price for the trolley at each shop for the month.

How has coronavirus impacted grocery prices? 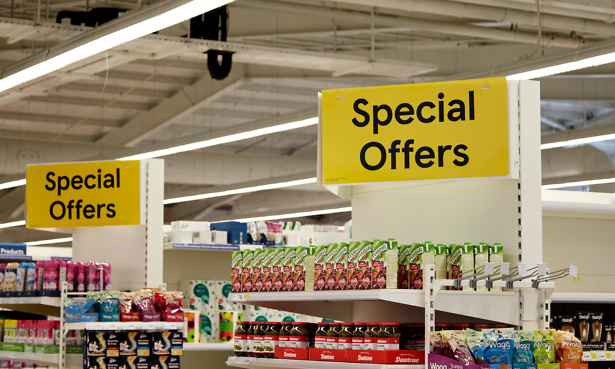 In the early stages of the coronavirus pandemic in the UK, supermarkets cut promotions heavily to discourage people from buying more than they needed.

As a result of this shift away from special offers, grocery prices have risen by 4.1%, according to Kantar – the highest level of grocery inflation since 2012. But what does this actually mean for your weekly shop?

Promotions have begun to return to supermarkets, but they still aren’t at previous levels.

Research by The Grocer reveals that the number of special offers is down 17% on pre-lockdown levels.

Sainsbury’s was the only supermarket that appeared to have returned to, and surpassed, pre-lockdown levels of promotions.

According to the analysis, frozen food saw the biggest drop in special offers, being down by 43% in the week of 15 June compared with 2 March. Bakery goods were also significantly less likely to be on offer, with promotions down by 30%, followed by food cupboard items (26%), household goods (24%) and fresh food (23%).

Of course, price is just one factor when you’re deciding which supermarket to shop at. If you have a choice of stores to go to, see what Which? members rated the best and worst supermarkets.