Each month, Which? analyses the price of food, drink and household essentials at the UK’s major grocers to reveal the cheapest supermarkets of the month.

We compared the prices of 70 branded and own-label items at Aldi, Asda, Lidl, Morrisons, Ocado, Sainsbury’s, Tesco and Waitrose every day in September.

We tracked the prices of everything from baked beans, penne pasta and Warburton’s wholemeal bread to yoghurt and vegetable oil, to work out which supermarket was the cheapest, on average, across the month.

So, where did September shoppers get the best value for money? Read on to find out.

How do the cheapest and most expensive supermarkets compare?

The cheapest supermarket in September was Aldi, with a trolley of 70 items costing £60.01 on average. This is the third month in a row that Aldi has won the battle to be named cheapest grocer.

Here’s how much our trolley of 70 items cost, on average, at each of the UK’s biggest supermarkets: 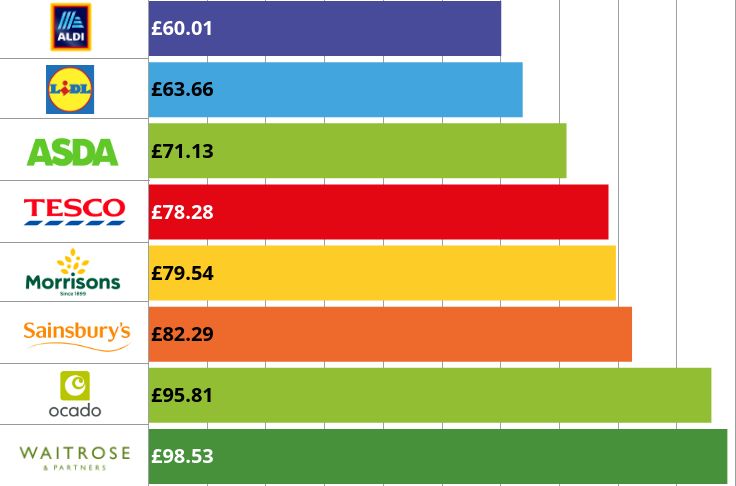 Waitrose – which parted ways with Ocado in September and now only sells via its own website – was the most expensive supermarket, with our trolley of goods reaching £98.53.

How do bigger shopping lists stack up?

Which? also compared a trolley packed to the brim with 150 items (the original 70 items plus 80 more). This included a greater selection of branded items, such as McVities Original Digestives and Lurpak spreadable butter.

Some of the items on our super-sized list aren’t available all year round from the discounters, so we’ve had to leave Aldi and Lidl out of this chart. 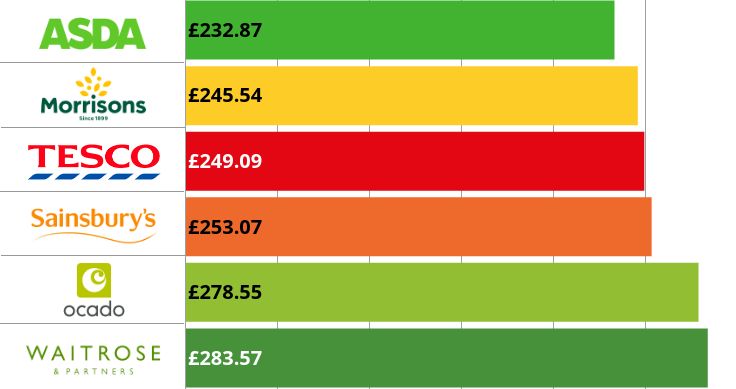 Asda was the cheapest supermarket in this test, with the total bill £12.67 cheaper than nearest rival Morrisons. Compared with priciest supermarket Waitrose (£283.57), Asda shoppers could have saved a whopping £50.70.

Asda was also the cheapest supermarket for a super-sized trolley when we checked in July and August.

We tracked the prices of 70 items at the UK’s eight biggest supermarkets throughout September.

For our larger trolley analysis we added a further 80 items for all supermarkets apart form Aldi and Lidl, where the products were unavailable.

Our shopping lists combined branded items such as Nutella Hazelnut Chocolate Spread and Yorkshire Tea, plus own-label products including lettuce, pasta and milk.

Of course, own-brand items aren’t exactly the same at different supermarkets, but we’ve used experts to ensure that the products are as comparable as possible based on a range of factors including weight, quality and other industry data.

What will Asda’s British takeover mean for customers?

On 2 October, Asda officially became a British-owned retailer for the first time in over two decades.

US retail giant Walmart agreed terms for a £6.8bn sale of a majority stake in the grocer to billionaire brothers Mohsin and Zuber Issa.

The pair say they will invest over £1bn in the next three years to strengthen Asda’s business and its supply chain, and grow its convenience and online operations.

This could be good news for consumers at a time when supermarkets have experienced a surge in demand both online and in stores.

The new owners have said they intend to ‘continue to offer low prices across Asda’s stores’.

They’ve also pledged to increase the proportion of UK-based suppliers, increasing the volume of products – such as chicken, dairy, wheat and potatoes – purchased from UK suppliers each year.