‘I remember coming as a child, and it was just a bustling wee town. It’s decimated now.’

Angeline Coyle (pictured above) is talking about Cambuslang, a town five miles south-east of Glasgow, where she has lived for over twenty years, and where she runs her own café.

Walking around the town, you’ll find plenty of spots like Angeline’s to grab a coffee, but despite a population of almost 30,000, customers might be harder to come by.

‘I can look out the window and see Main Street and there’s hardly a soul on it’, says Hilda Allison a resident of Cambuslang for over 50 years, and member of its Community Council.

You may be tempted to think this is the result of the COVID-19 pandemic, but Hilda knows the problem is deeper than that: ‘There’s nobody there because there’s no banks.’

Cambuslang is home to some of the most deprived areas in Scotland, which have a high dependency of cash. It lost all three of its bank branches in the space of 18 months, starting in 2016.

If people need cash now, Hilda says, then they have to go to the next town over, Rutherglen, or even to Glasgow – taking their spending with them.

But Cambuslang’s Community Council is fighting back, piloting new ways for locals to access cash – which could help other affected communities in the UK.

Here we look at why cash access matters to these communities and the innovations they’re trialling to save it – innovations that could soon be coming to a town near you.

The Community Access to Cash pilots are the work of an independent board comprised of banks, and retailer and consumer groups. It’s chaired by Natalie Ceeney, author of the independent Access to Cash Review, which was published in 2019.

Cambuslang is one of nine communities chosen to test various schemes aimed at improving access to cash and other financial services. The other eight can be found on the map below. 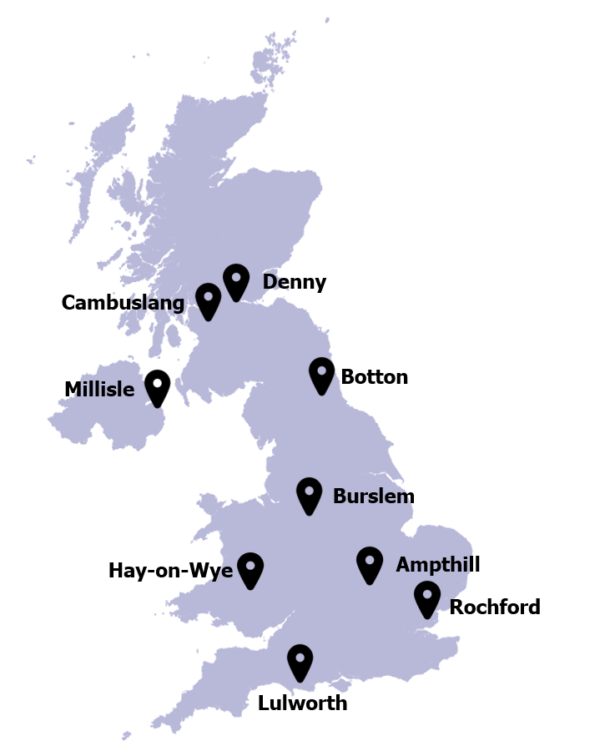 Just as the communities were selected based on the issues they face, and the strength of the local leadership to tackle them, each community will pilot schemes that address residents’ specific concerns.

‘This is not about us coming up with some ideas that we want to test,’ Natalie Ceeney explains, ‘it’s about the communities leading the thinking of what would work for their area and then us working with the banks and others to design something that meets that need’. Resident focus groups ensured local issues were matched with the best solutions.

Residents were also surveyed to make pilots as useful as possible. For instance, what hours do people want to do their banking? What factors matter most for them in a new banking hub?

While no two communities will trial exactly the same solutions, they will broadly be testing a tailored combination of:

In Cambuslang, locals hope that their new Post Office banking hub will make up for the loss of bank branches. Community Council chair and project lead in Cambuslang, John Bachtler, thinks the hub ‘is an important statement for the town centre’.

The current Post Office facility is a counter in a convenience store, and this doesn’t meet the banking needs of the community. John says the store is located at the far end of the street in a place ‘where some people don’t feel safe going.’ Those that do can find the store ‘cramped’, with no privacy to discuss financial matters.

The new hub will be more centrally located, John says, in a safer part of town. As well as traditional Post Office banking facilities, it will also have private spaces where customers can speak to trained representatives from a range of banks, where they should feel much more comfortable talking about their money.

The hub will also have cash-deposit facilities for local businesses. Until then, business owners have told us they regularly have to take hours out of their day to go to the nearest bank – and it’s not just a matter of convenience, but also safety. The next bank doesn’t have parking nearby, meaning those who need to use the banking facilities have to park and walk, often carrying cash, which isn’t ideal.

How will success be measured?

The pilots will begin in earnest in January and will run until June. Regular surveys will be used to track the various schemes, with a final report from Natalie Ceeney assessing the impact that the pilots have had.

‘A measure of success for the pilots is that we learn something that can be applied nationally; something we can replicate’, says Natalie. ‘But we reduce cash access to a numbers game at our peril. The quality of cash access is just as important as the fact that it’s there.’

Success in Cambuslang will be judged holistically. The banking hub and increased cashback facilities will sit alongside digital education services that aim to get more people online and increase their knowledge about personal finance.

For the town as a whole, there’s also the hope that the scheme will breathe new life into Main Street. ‘If people can get their cash out, it might make them stay in the town and shop’, Hilda says. ‘We might even get some more shops. We have a few empty ones, so maybe that will encourage people to come in.’

Why we need legislation

With 3,600 bank branches having closed across the UK since 2015, there are branchless towns like Cambuslang up and down the country which could be transformed by the findings from these pilots.

But while the innovations being trialled could play a big role in providing cash access to those who need it most, they are no substitute for legislation.

In his March 2020 Budget, the Chancellor Rishi Sunak committed to legislating to protect access to cash. However, in the intervening months both TSB and the Co-operative Bank have announced sweeping branch closures.

Which? has responded to the Treasury’s consultation on Access to Cash, calling for the swift introduction of legislation to prevent the collapse of the cash system.

These pilots show that people are willing to fight for cash and for their community. The question is: should they have to?

Freedom to pay. Our way

Despite the promise of legislation, we’re continuing to lobby the government to ensure that any intervention is timely, considered and comprehensive and ensures that cash access is fully protected for years to come.

We are also asking for the government to put the Financial Conduct Authority in charge of monitoring cash acceptance, something that has become a real issue during the pandemic. There is no point in protecting cash access if you have nowhere to spend it.

You can find out more about our ‘Freedom to pay. Our way’ campaign on our hub, including how to sign our petition, how to request an ATM and how to report incidents of shops refusing to accept cash.