Leaseholders who bought their homes through the shared ownership scheme could still face the full costs of cladding remediation bills, despite only owning minority shares in their flats.

With remediation bills sometimes running into the tens of thousands, some shared ownership leaseholders could end up facing bills higher than the equity they have in their homes.

Which? spoke to three people who live in homes bought through shared ownership, and who now fear bills for building safety issues could bankrupt them.

What is shared ownership?

Shared ownership (also known as ‘part buy, part rent’) is an affordable housing scheme that allows low-income buyers to purchase part of a home and pay a subsidised rent on the rest.

The minimum stake you can buy through shared ownership is 25%, though this will be lowered to 10% this year.

Buying a share in a property requires saving a smaller deposit and taking out a smaller mortgage, which is meant to make it an affordable route into homeownership.

The idea is that shared owners will be able to incrementally buy a larger proportion of the home until they own all of it. This is known as ‘staircasing’.

The English Housing Survey estimates that there are approximately 157,000 households living in shared ownership homes in England.

Why shared owners may have to pay to fix unsafe cladding

Even though they only own part of their homes, shared owners are responsible for paying the full costs of home maintenance.

‘I expected to have to deal with things like the boiler,’ said Timea Szabo a 37-year-old leaseholder from London. ‘I knew I’d have to pay to replace it, and 100% of that.’

But she did not expect to have to pay to remove unsafe cladding from the building’s outer walls. ‘Never at any point does anyone say you will be made responsible for maintaining the outside of the building,’ she said. ‘I don’t think cladding replacement is maintenance. It’s an upgrade.’

Though Timea was told she’d be responsible for the full cost of her flat’s maintenance, nobody warned her about the potential for external building maintenance when she was buying through the government scheme.

‘I feel I was trapped into this whole thing. Because that’s a really, really big thing that I would want to be warned about. That’s a really huge, potentially detrimental clause. And no one said anything.’

Because a building’s owners can legally pass on costs to residents who bought through shared ownership, shared owners across the country could be facing large bills, despite being on lower incomes. Not just bills for cladding, but for expensive waking watches and rocketing insurance premiums too.

The government announced a new round of funding for removing cladding from certain eligible buildings last week, which may help some shared owners but this won’t cover the costs of waking watches and insurance, or of repairs to other widespread building safety issues, such as missing cavity barriers.

Hear more: the Which? Money Podcast explores the cladding scandal

‘It feels like a complete and utter trap now’

The flat is part of the large Royal Artillery Quays development in Woolwich, southeast London. Timea wanted to create a stable home in the area for her son. ‘It wasn’t more expensive than renting around here so I thought overall it’s still a better option because of the stability and the security.’

Timea had bought a flat through shared ownership before, and with that flat, she had a good experience. But this time it was different.

‘I never used to be cynical. I used to be quite positive about shared ownership, but this situation has thrown up all these issues that I never even knew about.’

Royal Artillery Quays residents have been told their cladding bill could be £13m. If passed on to leaseholders, this could cost more than £35,000 each. Timea says she wouldn’t be able to pay it.

At the moment, she doesn’t know if the bill will be passed onto her, but she’s already seen a service charge increase over the years.

‘The whole point of being a shared owner is that you’re on a low income,’ she said. ‘So having a £200 increase in your service charges can push you over the edge. In my case it kind of has.

‘I’m a solo parent, I don’t have another source of income in this house, it’s me. I can’t pay it.

‘I feel trapped. Everything I’ve ever had is in this flat.’

Timea’s biggest worry is for her son. ‘That’s what upsets me the most, that I was trying to do this for him and he’s going to lose out the most because I’m going to lose the financial stability I had.’

‘If that bill does come to us, it’s going to be huge’ 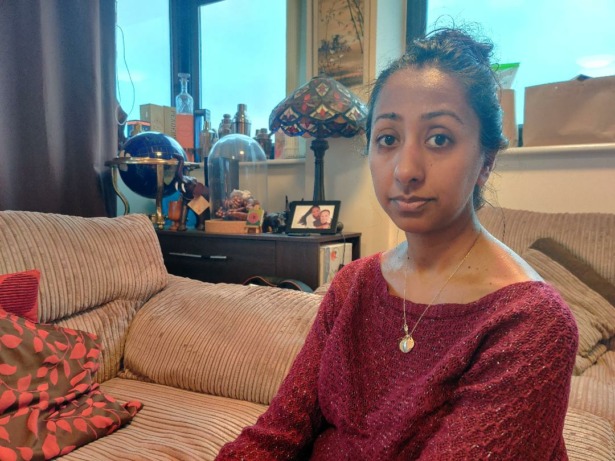 Deepa Mistry-Longley bought 75% of her London flat through shared ownership in 2010.

She doesn’t know if she’ll have to pay for cladding remediation, but the building safety crisis has left her trapped in an increasingly expensive home that her family has outgrown.

‘When I first bought, it was at the top end of my affordability, so I couldn’t really get any better than that,’ she told us. ‘I think four or five years onwards the bills have started to increase, and they’ve slowly edged up to a point where they are becoming quite unaffordable.’

Ten years after she bought it on her own, Deepa’s family has outgrown the two-bedroom flat. ‘My husband and I share our bedroom and then the kids share their own bedroom,’ she said. ‘We’re quite crammed doing any work, homework and that sort of thing.’

Naturally, her plan was to sell the flat and move somewhere bigger, but potential building safety issues put a stop to this.

The cladding on Deepa’s building was remediated three years ago. The work was done after the Grenfell Tower fire, so she assumed it would be safe. Despite this, she’s been unable to secure an EWS1 certificate – the elusive form that mortgage lenders require to prove a building isn’t dangerous. ‘That’s all we want. We just need the certificate.’

She has been chasing her housing association about getting one for over a year, but she still doesn’t have one. Many buildings have struggled to secure EWS1’s, as increasing demand outweighed the small number of qualified surveyors available to carry out the assessment.

Unable to move, Deepa is trapped in her flat with a high-interest mortgage and an increasing monthly service charge.

So far, she hasn’t been given any bills for cladding work, but she hasn’t received confirmation that she won’t be expected to pay for the work carried out three years ago. ‘If that bill does come to us, it’s going to be huge,’ she said.

Deepa has heard flats in other buildings are facing bills of £10,000 or more for cladding remediation, and worries what would happen if hers was the same. ‘How are they expecting me to come up with that kind of money?’ she said.

‘The government seems to think that this should be left to us. They must be living in a different world. It is a completely different world to the leaseholders who live in these types of properties.’

Deepa is unable to remortgage to reduce her monthly payments because her income has decreased since she stopped full-time employment. And since she can’t sell, this makes her what’s known as a ‘mortgage prisoner’. 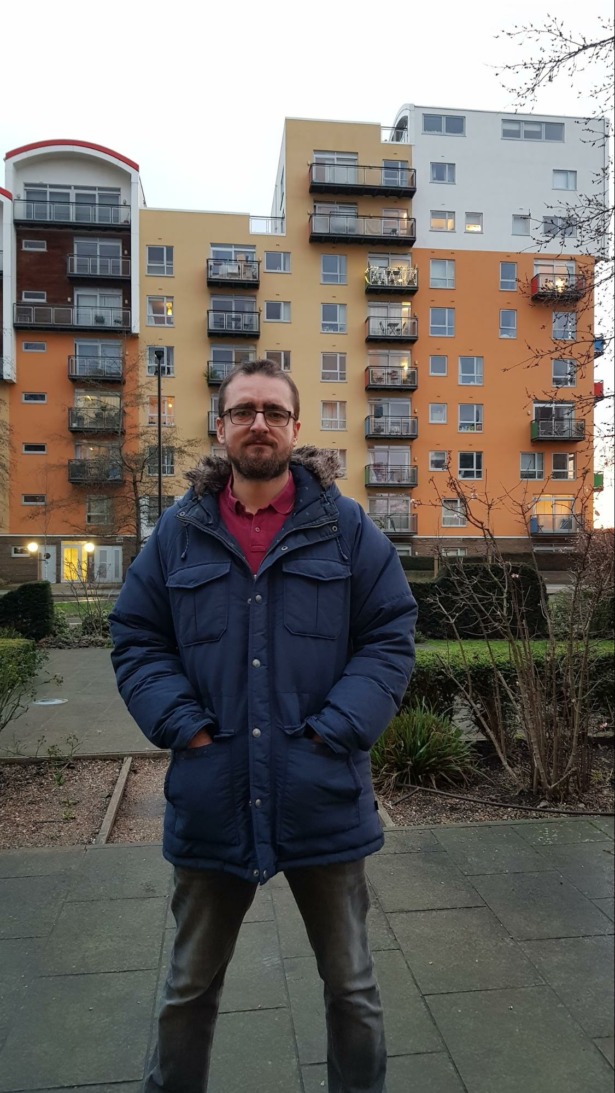 Savvas Chatziparaskevaidis lives with his daughter and his wife in a flat she bought 35% of through shared ownership in 2013.

‘It was the only way she could buy,’ he said of his partner’s decision to use shared ownership. ‘It was a first step on the ladder, there’s no other way for her to afford a property in London.’

‘I think until we found out about all the issues, shared ownership felt like a very good way to get on the property ladder.’

Like Deepa, Savvas and his family planned to move out to accommodate their growing family. ‘I’ve got a little one running around. She’s been running around for years but she needs more space as she grows.’

They wanted to move in summer 2020, which was when they found out they’d need an EWS1.

Savvas thought it would be a ‘tickbox exercise’. ‘We’ll get the form and once we have it we’ll move on,’ he thought. It didn’t work out that way.

When the EWS1 assessment came in, the surveyor had found issues with the cavity behind the building’s external facade. So while the building doesn’t have dangerous cladding, it will still need to be remediated before residents can sell their flats.

Savvas knows his family will be responsible for all of any costs passed onto leaseholders, despite owning less than half of the flat. ‘I don’t understand how it’s acceptable that, while you own 35% of a property, you’re responsible for 100% of the remedial works on the design of the building.’

‘This is not something that’s happened because of maintenance. With maintenance, you could argue that it’s justifiable for us to pay for it. This is part of the design of the building.’

Arranging and carrying out the remediation work could take a long time, so Savvas reckons his family won’t be able to move out for another three years. ‘It’s a hell of a wait,’ he says.

‘My emotions go through waves. I was very angry at first. There is sort of this feeling of despair. But mostly I’m angry.’

Fixing the problems with shared ownership

In September 2020, the government published a response to a consultation on the problems with shared ownership.

It set out key features that would be introduced to help reform the shared ownership model, including a new 10-year free repair period. During this time maintenance and repair costs will be met by the housing provider.

The consultation recognised that the issues shared owners face. It stated:  ‘Shared owners, like other homeowners, are currently responsible for all of the maintenance of their property and contribute towards the full cost of any repairs from day one. This means that those starting off with a small stake can be left with large bills.

‘For most people entering into shared ownership, the scheme serves as a first step on their journey as homeowners. The new repairs model will better bridge the gap between renting and homeownership. The changes will prevent new shared owners being hit with repairs and maintenance bills and better support them to put money aside towards buying more of their home.’

However, the consultation document states that the new shared ownership model will only apply to shared ownership homes delivered through the government’s Affordable Homes Programme (AHP) 2021-26 from 1 April 2021, so existing shared owners such as Timea, Deepa and the Chatziparaskevaidis family are unlikely to be able to benefit.

Which? calls for urgent government action to protect access to cash