We compared prices for a basket of 20 products throughout April and found that shoppers would have paid £22.64, on average, at Aldi. It narrowly beat rival discounter Lidl by just 12p.

Shopping at the priciest grocery retailer would have cost shoppers £8.25 more than if they had gone to Aldi.

But which major supermarket was cheapest for a larger trolley of 82 items? We reveal all below.

We checked the prices of 20 food items, such as own-label eggs and raspberries as well as branded products including Chicago Town pizzas, to see how the UK’s supermarkets compared. Here’s how much our basket cost on average: 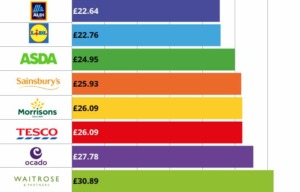 Groceries with some of the widest price differences included a popular tea brand, where there was a £1.22 difference between Aldi and Waitrose, and own-label large free-range eggs, which had a difference of £1.15.

But price is just one factor when you’re choosing a supermarket. Each year, we survey shoppers about quality, customer service, store experience, online deliveries and more to reveal the best and worst supermarkets to shop at.

Which? also evaluated a bigger shopping trolley packed with 82 items (the original 20, plus 62 more). This selection included a greater range of branded goods that aren’t always stocked in the discounter supermarkets, which is why we haven’t been able to include Aldi or Lidl in this chart. 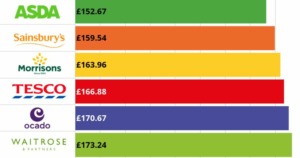 Asda was the cheapest of the traditional supermarkets, at £152.67 for the trolley full of products. It was a whopping £20.57 cheaper than the most expensive supermarket, Waitrose, which charged 13% more at £173.24.

We can’t compare exactly the same items each month because products aren’t always available at every retailer, but Asda has been the cheapest ‘big four’ supermarket for more than a year now, having claimed the title every month since January 2020.

Our trolley of food items changes slightly each month, as products must be available at every retailer for us to include them in the analysis.

Our shopping lists combines branded groceries, such as Cadbury Dairy Milk and Heinz Beanz, with own-label products such as onions, chicken drumsticks and milk. Although own-label items aren’t exactly the same at different supermarkets, we’ve used experts to ensure that the products are as comparable as possible based on a range of factors, including weight, quality and other industry data.

Using an independent price comparison website, we also calculate the average price (including special offers but not multibuys) for each product throughout the month. We then add those individual averages together to give an overall price for the trolley at each shop.

Is food getting cheaper?

Food prices have dropped for the first time since December 2016, according to data from market research company Kantar Worldpanel. Grocery inflation shrank to -0.3% in the 12 weeks to 18 April 2021, which Kantar said was largely down to promotions, as retailers ‘prioritised filling shelves over running deals last year’.

The study found that an extra £582m of groceries were sold on offer in April this year compared with last year, while grocery sales rose by 5.7%.

Meanwhile, Waitrose has expanded its partnership with Deliveroo to 110 more branches. This latest roll-out is expected to take the number of people able to get Waitrose food delivered by Deliveroo to around 13 million across Scotland, the North West, North East, Midlands, South West, South East and London.

The John Lewis-owned supermarket began offering the service on a trial basis in August 2020 from its stores in Bracknell and Clifton, and has continued to add further locations since.

Deliveroo users are now able to order from an increased range of between 750 to 1,000 products such as free-from items, flowers, gifts and vegan products that will be delivered in as little as 20 minutes.

Which? Investigates episode four: Is a plant-based diet healthier for you and the planet?

Heck vs The Jolly Hog vs The Black Farmer: which sausages are worth splashing out on?

Behind the label: what’s in your detergents?