Lidl was the cheapest supermarket in August, according to the latest monthly analysis from Which?.

We compared prices for a basket of 23 items throughout last month and found that, on average, shoppers would have paid £24.11 at Lidl. It beat rival discounter Aldi by just 43p.

Meanwhile, the most expensive supermarket was more than £9 pricier than Lidl for an equivalent basket of groceries.

Here, we reveal the month’s most expensive as well as cheapest supermarkets.

Cheapest supermarket for a basket of groceries

Every day throughout August we checked the prices of 23 items, including own-brand products such as apples and eggs as well as branded goods such as Hovis wholemeal bread, to see how the UK’s biggest supermarket chains compared.

Here’s how much our basket cost on average: 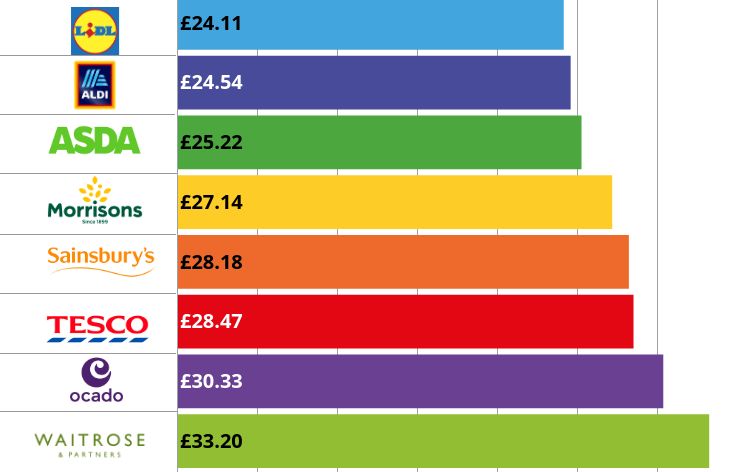 Of course, price is just one factor when you’re deciding which supermarket to shop at. We also survey shoppers on their experiences of supermarkets’ product quality, customer service, store experience, online deliveries and a range of other factors to reveal the best and worst supermarkets each year.

We also compared a trolley packed with 82 items (the original 23 plus 59 more). This included a greater selection of branded items, such as Branston baked beans and Colgate toothpaste, that aren’t always available in the discounter supermarkets – so for our bigger trolley we haven’t been able to include Aldi or Lidl. 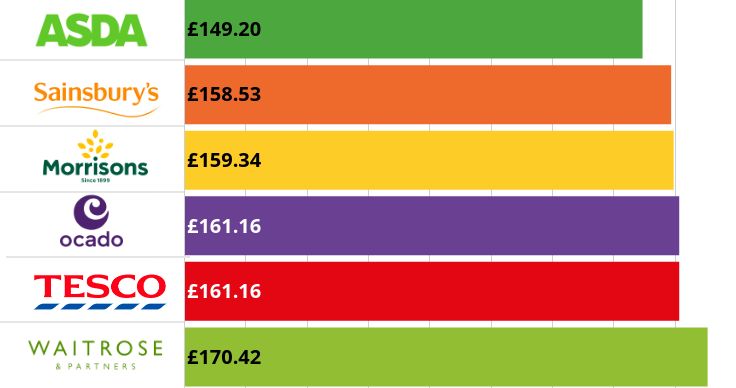 Asda, at £149.20, was easily the cheapest of the traditional supermarkets. It was a huge £21.22 cheaper than the most expensive supermarket, Waitrose.

Grocery prices at Sainsbury’s, Morrisons, Ocado and Tesco were similar, with just £2.63 separating them.

We can’t compare exactly the same items each month because products aren’t always available at every retailer, but Asda has been the cheapest mainstream (non-discounter) supermarket for 20 months now, having claimed the title every month since January 2020.

We check the prices of hundreds of grocery items at every major supermarket every day throughout the year, using an independent price comparison website.

In August, our shopping list combined branded items such as Kenco coffee, Oxo stock cubes and Twinings English breakfast tea with own-label products, including onions and milk. Of course own-brand items aren’t exactly the same at different supermarkets, but we’ve used experts to ensure that the products are as comparable as possible based on a range of factors, including weight, quality and other industry data.

A nationwide shortage of lorry drivers has led to warnings from some supermarkets about a knock-on effect for groceries.

Iceland’s managing director Richard Walker told the BBC last month he estimated his company was about 100 drivers short and that it could affect the supply chain for Christmas goods. But Tesco boss John Allan said people should not ‘over-dramatise’ and panic-buy.

The government has said the food supply chain is resilient and is taking measures to tackle the driver shortage.

Meanwhile market analyst Kantar said its data showed that with the end of social distancing restrictions, people have been happier to head into stores for more regular, smaller shops over the past month.