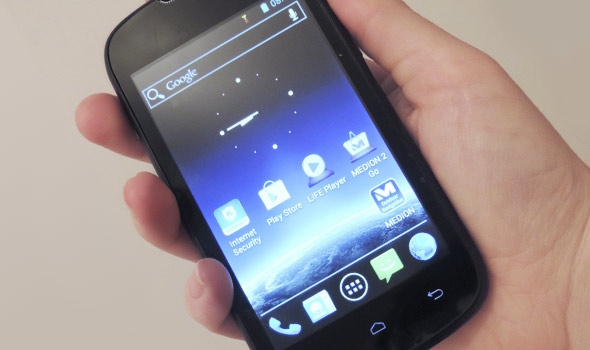 Aldi has launched its first smartphone – the Medion Life E4001. At a cheap £79.99 the Android phone has a 4” screen and a 2-megapixel camera.

But, with so many budget smartphone emerging on to the scene of late, does Aldi’s smartphone represent value for money – even at this cheap a price?

Best smartphones under £100 – we pick the best value mobiles

The Medion Life smartphone launched in Aldi stores on 7th August for a very reasonable £79.99. Don’t be surprised if it’s already vanished from the shelves of your local store however, as this is an Aldi ‘special buy’ product, and only available while stocks last. That said, it’s likely that this phone, or one very similar to it, might suddenly pop-up in again the months ahead.

Questionable screen quality – the Medion Life has a display resolution of just 480 x 800. This is the bare minimum we’d expect but, because of the low resolution, the screen won’t be ideal for viewing photos or browsing the web. We also noticed a slight lag when using touchscreen controls, leaving you wondering whether you’ve opened an app or not.

Old operating system – disappointingly the Medion Life runs Android’s Ice Cream Sandwich operating system. Android has been updated twice since this version was released meaning it’s behind the times. And, as it’s been confirmed that this particular handset is too low-powered to be upgraded, you could be left without the latest versions of your favourite apps too as support for Ice Cream Sandwich is abandoned.

Sub-standard camera – the camera on this smartphone offers only 2Mp which falls well behind all of the sub-£100 phones we recommend in our ‘Best cheap smartphones’ guide. We could forgive the low megapixel count, but the pictures we took came out fuzzy and far from what we have expect from a smartphone camera.

Which? expert verdict – ‘there are better phones for a similar price’

The Medion smartphone works, but that’s all I can really say of this budget offering. There’s nothing truly terrible about the phone – it’s quite compact and you can make a call, use the web, take a (mediocre) photo – but everything about it, from its unresponsiveness to lack of storage space is underwhelming.

It feels cheap, and reminds me of my very first smartphone. That’s hardly praise though as mobile tech has moved on a long way since then. In short, even at this low price point, Aldi’s smartphone simply doesn’t cut it.

That’s not to say that all phones within this price range suffer in the same way though. We recently took a look at the best cheap phones around, and found three that would be much more preferable to the Aldi Medion smartphone. It just goes to show that great value can be had, as long as you know what to look for.
Hannah Walsh – business researcher