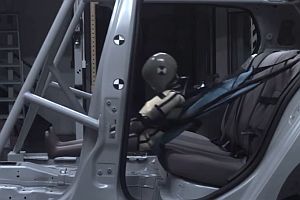 Parents are being warned to avoid dangerous and illegal fabric child car seats after Surrey Trading Standards show footage of one disintegrating during a crash test.

The crash test dummy, which represents a three-year old child, is shown being catapulted into the front of the car by the forces created during a 30 mph crash. The fabric child car seat is shown being ripped apart at the seams.

A real-life version of this crash would pose significant danger of death to a child, Which? experts have said.

See which other car seats you should avoid in our list of Don’t Buy child car seats. Not a Which? member? Join Which? for full access to all of our reviews.

Surrey council’s trading standards team is warning parents not to buy fabric child car seats like the ones shown in the picture below. The seats are so dangerous they’ve been called ‘killer car seats’ by the team.

If you own one of these fabric car seats, or know someone who does, advice from Surrey County Council is to replace it immediately and contact its trading standards department on 03454 040506.

If you need to choose a different car seat, our child car seat reviews and video guide to buying a child car seat will help you get the safest one for your child. Which? carries out more stringent child car seat tests than the UK standard requires, so you can buy with confidence. 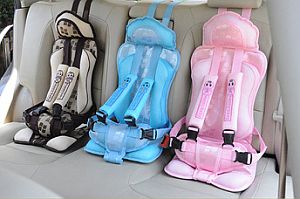 These fabric seats are illegal in the UK and have been imported from China or sold on international websites.

After following up on an initial complaint about a Surrey sale, the county council has worked with major online retailers, such as eBay and Amazon, to remove more than 100 of these seats from the market.

But the council says that some foreign websites are still flouting UK law and selling the seats to British customers.

The law on child car seats states that only EU-approved child car seats can be used in the UK. These have a label showing a capital ‘E’ in a circle. The fabric car seats do not carry a label that certifies that they have passed UK safety standards.

You can find out more in our guide to the legal requirements for child car seats.