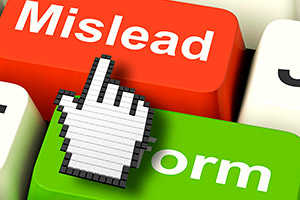 Consumers now have greater rights to financial redress if they are the victims of misleading actions or aggressive sales tactics.

The new rules come into force today and have been made to the Consumer Protection from Unfair Trading Regulations.

The regulations make it clear that traders are not allowed to use misleading, underhand or aggressive tactics to get you to part with your cash.

But until today, consumers were unable to get any redress directly under the regulations if they had experienced dubious sales tactics.

Find out more about your new rights.

The right to undo a contract

The new rights mean that consumers may be able to exit a contract if they can show they entered into it due to a misleading action – for example a false statement – or aggressive selling.

As long as the individual has not fully consumed or used the product or service they bought, and provided they reject the contract within 90 days, consumers will be entitled to end the contract and receive a full refund.

The right to a discount on the price paid

If someone can show that a misleading or aggressive tactic was a significant factor in entering into a contract, they will be able to seek a discount in respect to past or future payments due under that same contract.

The new regulations will entitle people to a 25%, 50%, 75% or 100% discount depending on whether the trader’s breach is considered to be minor, significant, serious or very serious.

The level of seriousness of the trader’s actions will depend on their behaviour, the impact this has had on the consumer and how much time has elapsed since entering into the contract.

An entitlement to seek damages

Damages will be available for different types of loss – consequential financial loss and alarm, distress or physical inconvenience or discomfort as a result of the incident being complained about.

If someone has taken out finance to pay for a contract that was made as a result of misleading actions or aggressive selling, the consumer can exit the contract and recoup anything that has been paid.

For all these new rights to apply, consumers must have entered into a contract due to misleading actions or aggressive selling.

Misleading omissions are not covered by the new rights under the Consumer Protection from Unfair Trading Regulations.