Three years ago, we reported on a warning from Surrey Trading Standards Institute about the sale of dangerous fabric seats being marketed as car seats. When used in a crash test, they demonstrated an almost complete lack of support for any child strapped into it.

Make sure you’re not opting for a Don’t Buy car seat by reading which ones have failed our rigorous testing.

In 2014, the issue of dangerous fabric car seats being sold in the UK was raised when car seat manufacturer Britax carried out a crash test with them showing the effect of an impact when travelling at 30mph.

The crash test dummy – representing a three-year-old child – was catapulted through the windscreen as the straps failed to hold the child in place, which would cause catastrophic injuries.

At the time, Surrey County Council Trading Standards explained it had managed to remove a dozen types of these car seats from sale, but it seems that more sellers have since sprung up and are selling these car seats to customers in the UK.

The car seats appear to be shipped from China or Taiwan (often for free) and at extremely low prices. Some Ebay sellers are offering them at a ‘Buy It Now’ price of as little as £8.99, which could represent a real risk for families who are trying to save a bit of money by going for a cheaper option of car seat. 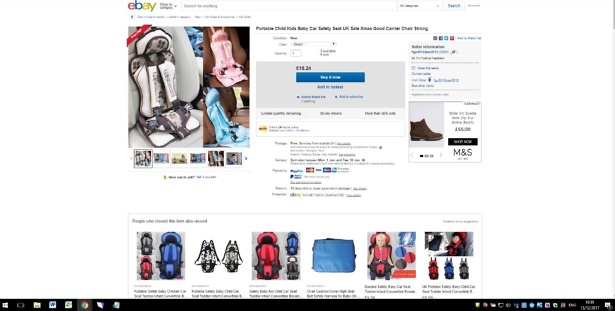 For one of the car seats, the item description says it’s ‘100% brand new and high quality’ and can be ‘used to protect your baby when driving’.

When we alerted the Chartered Trading Standards Institute, a spokesperson told us it has contacted the primary authority officer for Ebay to request that these fabric seats are removed from sale.

When we contacted Ebay, a spokesperson said: ‘The safety of our customers is our number one priority and we work closely with trading standards to keep our marketplace safe. We have removed these items and will continue to monitor any listings.’

However, what’s most concerning is the number of different sellers that you can buy these types of seats from. While it’s possible for Ebay to remove each one that it’s made aware of, more may spring up in their place. We spotted some of the seats still on sale this morning.

Which? car seats expert Lisa Galliers says: ‘You can see the shocking outcome of using one of these fabric seats in a crash in the Trading Standards video. We very much doubt they’d pass our crash tests.

‘The law on child car seats states that only EU-approved child car seats can be used in the UK. These have to have a clear orange approval label on to show they can be sold on the UK market.’

When Which? tests car seats, we go further than the legal minimum standards. Our safety testing has uncovered car seats where the force of the crash has ripped the harness out of the seat, sending our test dummies flying.