Wimbledon is warning that any match tickets flogged on unathorised marketplaces will be immediately invalidated.

But touts selling tickets for almost 10 times their face value told Which? they would ‘definitely’ guarantee entry to the tennis tournament.

The only tickets allowed to be freely traded are debenture tickets, which are currently being sold on secondary ticketing sites for more than £17,500 for the men’s final with hospitality.

Wimbledon says it’s aware of non-debenture tickets for sale and sellers found to be in breach of their rules could be subject to legal action.

On Friday 22 June, Which? counted 36 listings on Gumtree for Wimbledon tickets, ranging from £8,000 for two tickets to the men’s final to £850 for a pair of tickets to the court number one in the second round.

There are also a number of listings on Viagogo, StubHub and Go Sports Tickets but they all appear to be debenture tickets.

A spokeswoman the for All England Lawn Tennis and Croquet Club (AELTC) – the organisation behind the Wimbledon tournament – said: ‘Debenture tickets are the only Wimbledon tickets which are freely tradeable.

‘This is the legal right that comes with purchasing a debenture and is judged to be fair value for the long-term investment that debenture holders contribute towards The Championships.’

Debentures pay a one-off fee which goes towards the upkeep of the Wimbledon grounds and in return they get tickets to all the major events held there. They are issued every five years. The last batch covers 2016 – 2020 and cost £50,000.

The spokeswoman said the AELTC Ticket Office is aware of the tickets currently listed on Gumtree.

‘The AELTC takes active steps to monitor advertisements and sales, including those made via shops and internet sites.

‘Sellers of non-debenture tickets will be contacted and sellers found to be in breach of the AELTC’s Conditions of Sale may be prohibited from receiving tickets in the future as well as subject to legal action.’

Anyone who bought normal tickets through the ballot system but then found themselves unable to attend can get a refund through the ticket office.

You’ll definitely get in

Which? contacted some of the touts on Gumtree and Ebay and asked whether their tickets would guarantee entry. 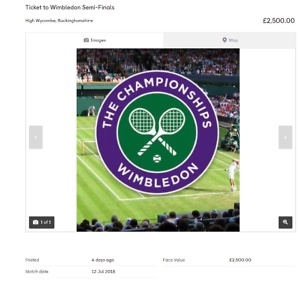 One selling two tickets for to the women’s semi-final for £1,500 – more than 10x their face value – said his tickets would ‘definitely’ guarantee entry.

Another tout selling two centre court tickets for the women’s semi-final for £1,959 told us: ‘There is a small chance of being asked for ID but from what I hear it is very rare.’

And someone selling one ticket to Court number one on 7 July said: ‘It’s not a debenture ticket, but yes I can guarantee entry with the ticket.’

They said because it’s a ticket allocated to their tennis club and not one individual, there isn’t a name on the ticket.

In September 1990, Wimbledon introduced a number of measures to curb the black market sale of tickets. Those included:

The dangers of ticket touts

We don’t advise buying tickets from street touts as your rights of redress are against the seller, who in this instance will usually be difficult to trace.

If you bought tickets from a non-official secondary ticket seller, you have fewer rights.

We have more information about what you need to know before buying from an online market place on our Consumer Rights site.