The latest Which? smartphone lab-tests have covered some of the broadest ranges of pricing and scores we’ve ever seen. We’ve welcomed three new phones to the Best Buy club, with the most impressive scoring 75%. But, we’ve also seen one model fall way below expectations. A Don’t Buy through-and-through, the offender left our lab with a paltry 34%.

Six new mobile phones were tested, and there’s something for everyone. The most expensive was Sony’s new shrunken-down premium phone, the Xperia XZ2 Compact, priced at £529 – not unreasonable for a phone declared to be top of the line by its manufacturer. We also have the newest entry to the ever-popular Samsung mid-range A-series, the Galaxy A8, coming in at a more affordable £399.

And right at the other end of the spectrum is the Nokia 1, a £50 entry-level device designed to help strengthen the fallen Finnish giant’s burgeoning place in the Android smartphone market. Read on to find out more about all these models, plus the rest of the bunch.

Mobile phone Best Buys – browse all of our highest-scoring smartphones 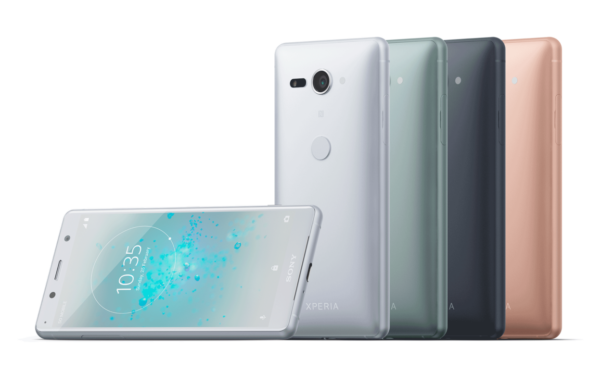 Around five years ago the Compact versions of Sony’s Z-series handsets were some of the most impressive and popular Android devices on the market. In the age of the IMAX-sized super-phablet, though, their popularity has waned. We tested the full-sized Xperia XZ2 back in May, but it’s the Xperia XZ2 Compact that’s the most interesting of the two.

What makes it so interesting is that it’s a virtually identical to its big brother. It has the same high-end Snapdragon 845 processor, 4GB of Ram with 64GB of storage, 1,080 x 2,160 pixel resolution display, and Sony’s own-brand 19Mp rear-facing camera – all of that, while being crammed into a body more than 13% smaller. That Full-HD resolution is only being spread over a 5-inch display rather than a 5.7-inch one, too.

The real notable absence is the lack of wireless charging, a choice we can only presume was down to limited space within the handset. The battery is a little smaller, but that might not too detrimental – the display is by far the biggest drain on power with a smartphone, so a smaller handset needs less battery power.

If you’re looking for a smartphone that won’t give you wrist cramps or stretch out your jeans’ pocket, then this could be the one for you. Find out how it fared in our tests with our full Sony Xperia XZ2 Compact review. 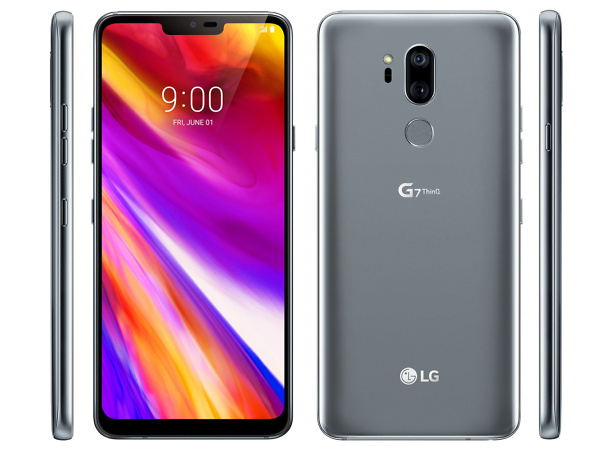 If you’re after a full-sized premium phone, the LG G7 ThinQ has a screen that’s 1.1 inches bigger XZ2 Compact – and it’s only £70 more expensive. Perhaps aware of its dwindling influence in the smartphone world, LG has released the latest update to its premium range at a very competitive price (for comparison, the Samsung Galaxy S9+ is a whole £270 more expensive).

It actually has a great deal in common with its Sony-made rivals: you get the same state-of-the-art Snapdragon 845 processor, 4GB of Ram, and 64GB of storage. It ups the resolution though, with its sizeable display measuring 1,440 x 3,120 pixels – that’s Quad HD. It also follows the dual-camera trend, both 16Mp just as we’ve seen previously on the Samsung Galaxy S9+.

It’s the successor to the LG G6, but you may be wondering why the name has changed. ‘SmartThinQ’ is the name for LG’s new platform that connects a whole host of its products. From washing machines to fridges to robot vacuum cleaners, any SmartThinQ product can be connected and controlled from one central app. That central app resides on the LG G7 ThinQ.

Tired of the same big names? Or perhaps you just want to save a little money – make sure you see if this is the right mobile phone for you with our LG G7 ThinQ review. 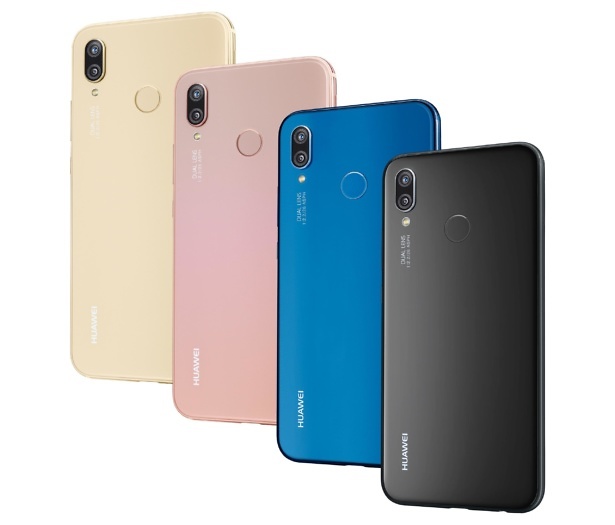 A few months back we tested the Huawei P20 and P20 Pro, the Chinese company’s first handsets to truly attempt to disrupt the top end of the market here in the UK. We found the slick, pearlescent lustre of the handsets particularly striking, and we’re pleased to say that the aesthetic has been carried over to the P20 lite.

As the name suggests, it’s a more cost-friendly, stripped-back version of its two namesakes, and it could certainly fool an unsuspecting passer-by at a glance. A deeper look into it and the differences are a little more obvious: the processor is a little weaker, the battery is a little smaller, and you get 64GB of storage (as opposed to 128GB) – plus the back of the handset is plastic rather than glass.

That said, the similarities are quite impressive. It has an ample 4GB of Ram, just like the P20, and its Full-HD display is virtually identical (it’s 0.04 inches larger). You still get a dual-lens camera, too. There’s a 16Mp main sensor paired with a 2Mp secondary one that’s primarily used for depth perception. It probably won’t have the same wow-factor as the two-headed monster on the P20, but to see a dual rear camera on a handset this cheap is still exciting.

Could this be the perfect compromise of price and performance? Click the link to read our full Huawei P20 lite review. Sitting comfortably between the glamorous Galaxy S series and the cheap-and-cheerful Galaxy J range lies Samsung’s Galaxy A devices. The most popular mid-ranged devices out there right now, the Samsung Galaxy A8 is the latest addition to the family.

Coming in at just under £400 it’s certainly pushing the constraints of what could truly be considered ‘mid-range’, but one look at the specs and it’s easy to understand why. Fronted by a 5.6-inch Full-HD AMOLED display it’s powered by Samsung’s own Exynos 7885 octa-core processor and 4GB of Ram. The body is constructed similarly to the Galaxy S9 with an aluminium frame and a glass back, and once you factor in the dual-lens rear-facing camera (16Mp and 8Mp respectively) it’s hard to see where Samsung actually cut costs. The only obvious place was in loading it with the dated Android 7.0 Nougat – but even that can be updated to 8.0 Oreo straight out of the box.

For practically half the price of its flagship sibling, this is a tempting choice for Samsung fans. To find out how it fared in our test lab, read our Samsung Galaxy A8 review. 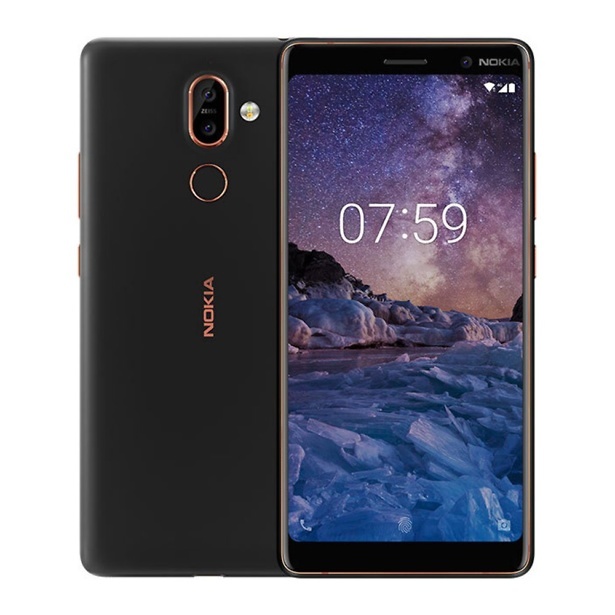 If you’re looking to save even more money you may be interested in the Nokia 7 Plus. Nokia still has some way to go to rebuild its reputation, but the 7 Plus may represent a big step in its journey.

With looks that strongly resemble the old Lumia range, it’s a big-bodied aluminium and copper handset featuring a 6-inch Full-HD display, a mid-range processor famed for performing beyond its modest status, 4GB of Ram and twin rear-facing cameras – in other words, exactly what you’d be looking for at this price. Combine that with a genuinely impressive 3,800mAh battery and this could be an unexpected choice for your next upgrade.

Is it time to go back to Nokia? Find out the answer in our full Nokia 7 Plus review. 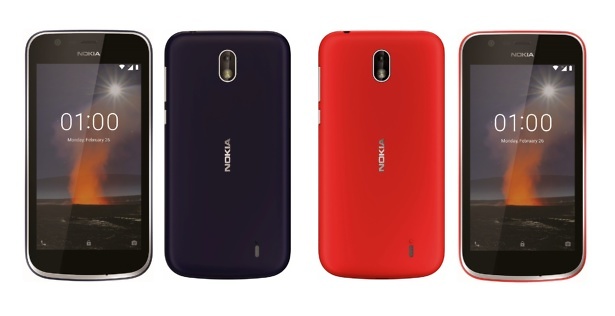 No, that’s not a typo, and no, this isn’t a 2018 re-imagining of the 3210 – this another fully-fledged Android smartphone courtesy of Nokia. Well, fully-fledged with one small caveat.

The Nokia 1 actually comes running Android Go, which is a tailored version of Google’s popular operating system designed to run on especially cheap handsets. While it still has access to the full suite of apps, the Google essentials that come pre-loaded on it (such as Gmail and Messages) are tweaked to take up less space and run more smoothly – and the Google Play Store is even customised to show Go-friendly apps first.

That should tell you a little about the sort of calibre of phone you’re dealing with. At £50 it’s, understandably, made of the most basic components possible: a 4.5-inch 480 x 854-pixel screen, 1.1GHz quad-core processor, 1GB of Ram and a very modest 5Mp main camera. Perhaps the only real unforgivable cut-back is the paltry 8GB of on-board storage, but you can at least expand that with a micro-SD card.

We can tell you right now that there’s no way it’s going to be challenging the Apple iPhone X, but even the greediest of customers wouldn’t expect that. It does have a great deal of potential for those who just want a simple, cheap handset that does the basics right. If you only want basic communications and use of a few apps then it could be a smart money-saver.

Bargain of the year or bargain bin? See what our lab experts made of it with our Nokia 1 review.

Still having trouble deciding? Read our guide on how to buy the best mobile phone.