Off-road luxury SUV maker Land Rover has teamed up with popular pushchair brand iCandy to create the iCandy for Land Rover Peach All-Terrain, the first pushchair to be launched at the Frankfurt Motor Show.

This upcoming release from iCandy is a special edition of the Peach All-Terrain pushchair, the brand’s flagship model, and is iCandy’s first four-wheel all-terrain pushchair. It is one of a couple of recent examples we’ve seen of car brands making the foray into pushchair design. Read on to find out more about the new iCandy for Land Rover pushchair, and the latest collaboration between Silver Cross and Aston Martin.

Whether you’re after an all-terrain pushchair, a stroller or double buggy, check out which models have proven themselves to be durable, comfortable and convenient enough to be a Best Buy pushchair.

What is the iCandy for Land Rover Peach?

Details are still forthcoming, and we will update you as we find out more. Here is what we know so far:

This isn’t just a re-upholstered iCandy

It’s actually been designed and built from scratch by the two companies. They claim that the combination of Land Rover’s expertise in motor design and iCandy’s expertise in pushchair design gives this new all-terrain a unique advantage over existing all-terrain pushchairs. We will have to wait and see.

It has four wheels

This is iCandy’s first all-terrain pushchair with four wheels, which could help it tackle uneven surfaces and provide stability. According to the manufacturers, having four wheels ‘acts as a clear and intended tribute to the exceptional four wheel legacy of Land Rover’ – but there is no Land Rover four-wheel-drive or low-range gearbox in sight – yet.

It has Land Rover inspired design

Beyond the four wheels, there are lots of design details that mirror Land Rover’s aesthetic. Land Rover’s signature grille pattern has been incorporated into the design of the hood, and the seat stitching coordinates with that found on the seats of most Land Rover vehicles.

The footmuff and seat liner also have elements of design from the car brand, and part of the of the handle is the same shade of orange that Land Rovers are available in.

How much is the iCandy for Land Rover Peach?

The expected price is £1,500, which would make it almost three times the average price of all-terrain pushchairs we’ve reviewed, and twice as much as the current iCandy Peach All-Terrain model.

When will the Land Rover iCandy pushchair be available?

The pushchair is due to hit stores in Spring 2018. But you can head to the iCandy website now and register your interest.

Would you buy this luxury pushchair?

Tell us what you think in our opinion poll.

We don’t yet know how the new Peach will stand up to its lofty claims.

‘However, we highly recommend any potential Land Rover owners check out our car brand reliability page before buying.’ 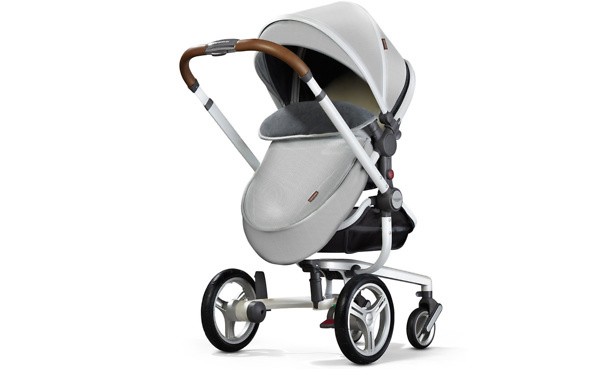 Stay tuned as a new Aston Martin Silver Cross pushchair is just about to drive over the horizon and into view, due to be revealed tomorrow. We’ll update you on the details from the Kind und Jugend baby fair.

We don’t just go for a stroll. Every pushchair we get into the lab runs a gamut of obstacles, gets bumped up and down kerbs and covers over 200km on a rolling road.

To see how pushchairs have fared with out tests, head for our independent pushchair reviews.