Now TV has announced it is moving into the broadband space, looking to build on the appeal of its ‘contractless’ approach to paid content.

The Sky-owned provider, known for its ‘Netflix-style’ subscription model, allows access to sports, movies and entertainment through monthly passes, which can be cancelled anytime.

The new Now Broadband service takes a similar approach with the option of not being tied down to a contract, but is there a premium for this flexibility, and do its packages offer good value?

Now Broadband is the new kid on the block – see what it’s up against in our guide to the best broadband providers.

There are three deals on offer – two at fibre speeds and one standard broadband. These either come with a 12-month contract or no contract at all – for an extra £35 set-up fee you can simply pay month to month. Although other providers do offer packages with no commitment, with Virgin Media being one example, it’s far more typical to enter a lengthy contract, so this could be better suit your needs. But does Now Broadband actually offer good value? The tables below show how its packages compare to other providers on the market.

Standard broadband (up to 17mbps)

Fibre is becoming increasingly popular as prices fall, but if you rarely use the internet, or only use it for basic tasks such as emailing and web browsing, standard broadband could be a perfectly adequate, and cheap solution. For standard broadband, Now Broadband is among the cheapest options, and even without a lengthy contract is less than rivals like BT.

If you’re finding standard broadband a bit sluggish, or are struggling to achieve high enough speeds, this entry-level fibre package could suit. At fast fibre level, Now Broadband may offer decent value, especially when compared with its parent company, Sky, which can cost up to £8 extra a month for the same package.

Superfast fibre (up to 76mbps)

If you use the internet a lot, especially with streaming services such as Netflix, or you live in a busy household with a lot of connected devices, superfast fibre is a good bet. Now Broadband, despite not coming close to Vodafone as the cheapest option, again offers good value, even with the ‘no-contract’ price. Here it’s almost £7 cheaper than EE, which ties you down for 18 months.

While Now Broadband isn’t the cheapest option around, it can still represent good value, particularly for people who are looking not to commit to long contracts. If you’re prepared to lock yourself into one, you’ll save more – and Now Broadband’s 12 month contract length is less than most. 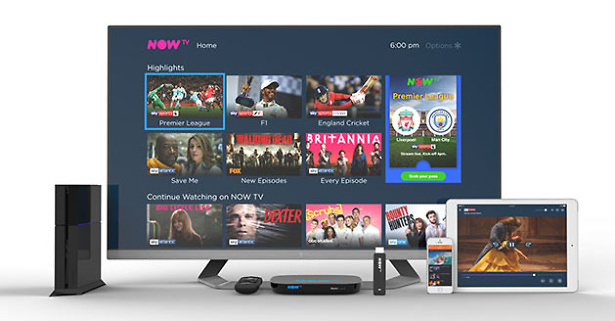 Now TV allows users to enjoy premium channels without being tied into a long-term contract. It offers four passes, ranging from £2.99 to £9.99 per month for Entertainment, Cinema and Kids TV. You can also pay £33.99 for Sky Sports. For more information on how it works, read out guide to Now TV.

Having also recently released the UK’s cheapest internet TV stick, Now TV is looking to make serious strides as a telecoms provider and establish itself as a different option to its parent company Sky. If you’re wondering how to get started with Now TV, we have you covered here, too. See our first look of the new Now TV Smart stick, and full reviews of other Now TV devices as well.

Still weighing up your options? Read our guide on how to buy the best internet TV box.