One in ten people buy more than one service from their energy company. But you’re paying a price for convenience, exclusive Which? research reveals.

In fact, you could overpay around £400 in a single year by buying broadband and energy from one firm, rather than shopping around for separate, cheaper deals.

We often reveal big differences between the cheapest and priciest utility deals. Here, we’ve looked at annual prices from the biggest energy firms which also sell broadband or mobile phone tariffs, and compared them with the cheapest equivalent deals we could find.

But price isn’t the whole story; customers commonly cite service as a major factor in choosing a new firm. So we’ve also listed other benefits, and what customers think of each supplier to help you make the best choice for peace of mind, as well as your wallet.

Read on to find out the cost of convenience with SSE, Utility Warehouse, First Utility and Economy Energy, plus the Which? verdict on each company.

The original utilities bundle is from Utility Warehouse. Customers can buy gas, electricity, home phone, broadband and mobile all in one monthly package. They receive one bill for all, and customers value this convenience.

But several other energy firms have expanded their services beyond gas and electricity in the past couple of years. You can buy broadband from SSE and First Utility, while Economy Energy offers mobile phone packages as Economy Mobile.

Their energy and telecoms tariffs are separate, but some give discounts or incentives to customers who buy energy too. 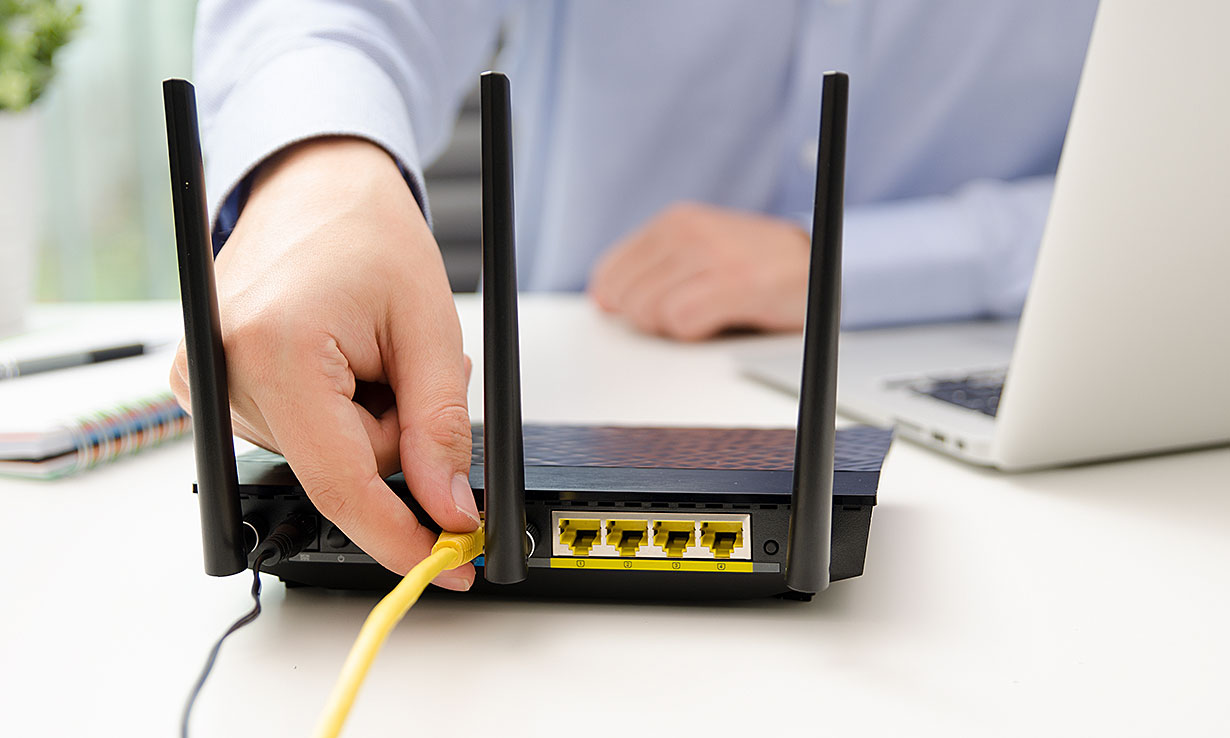 If you’re keen to buy standard broadband from your energy firm, First Utility is the cheapest option. Overall, it costs around £302 less per year for its cheapest energy deal and standard broadband rate than the equivalent package from Utility Warehouse, and £172 less than buying both from SSE.

But to truly top up your savings, buy energy and broadband from two different companies. This could save £120 extra per year compared with First Utility, and £422 compared with Utility Warehouse. 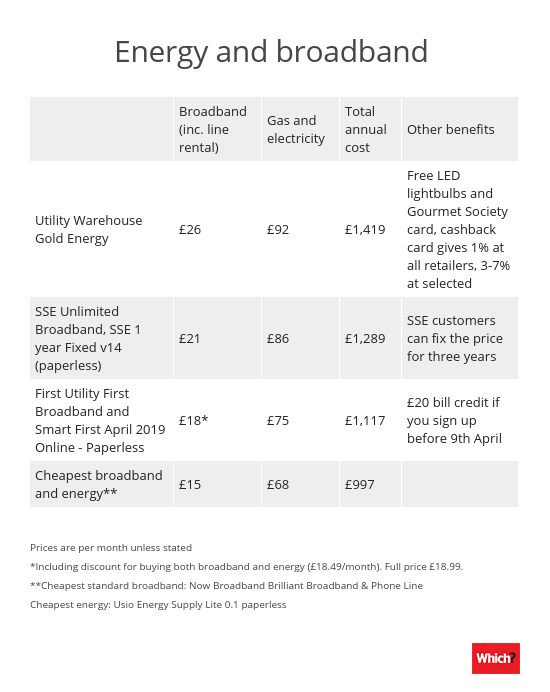 These packages are standard broadband – with download speeds of up to 17Mbps. If you want faster fibre, keep reading. 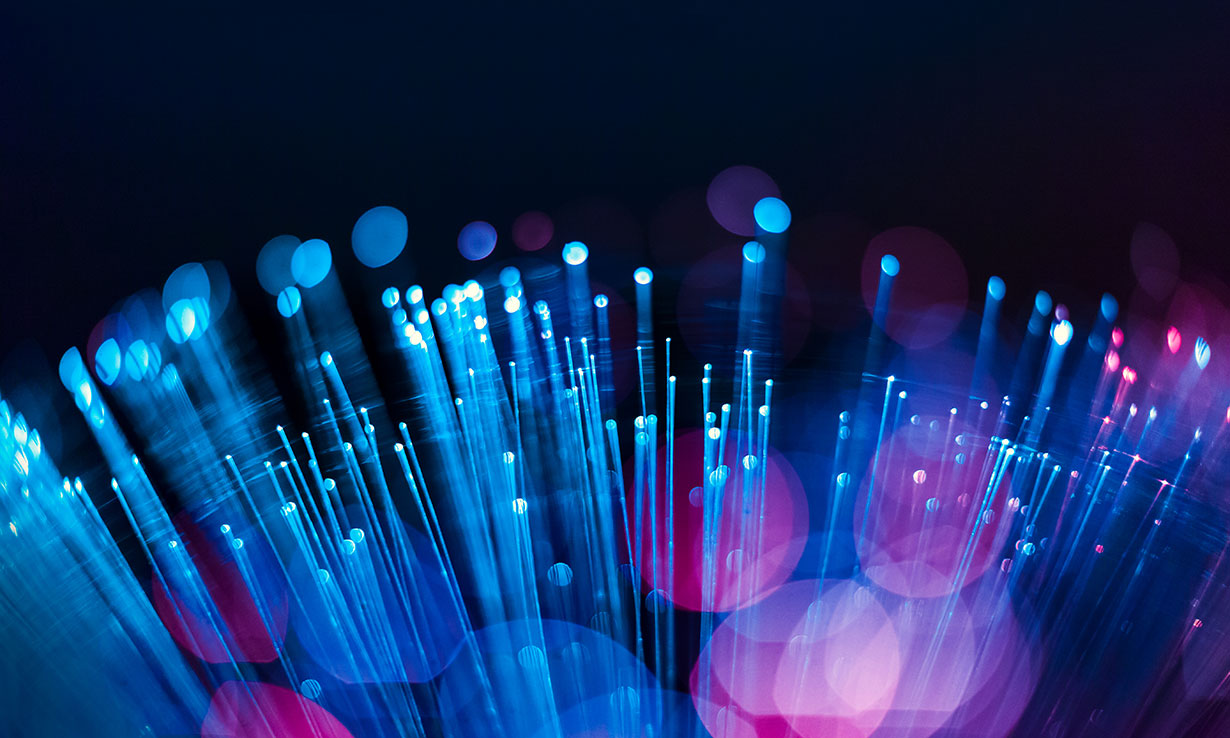 Comparing the prices of fibre broadband and energy over a year, your bills will be better off with First Utility. But if you’re prepared to shop around, buying the equivalent speed broadband package and same amount of gas and electricity from separate firms will save you over £400 per year.

Up to 38Mbps fibre broadband 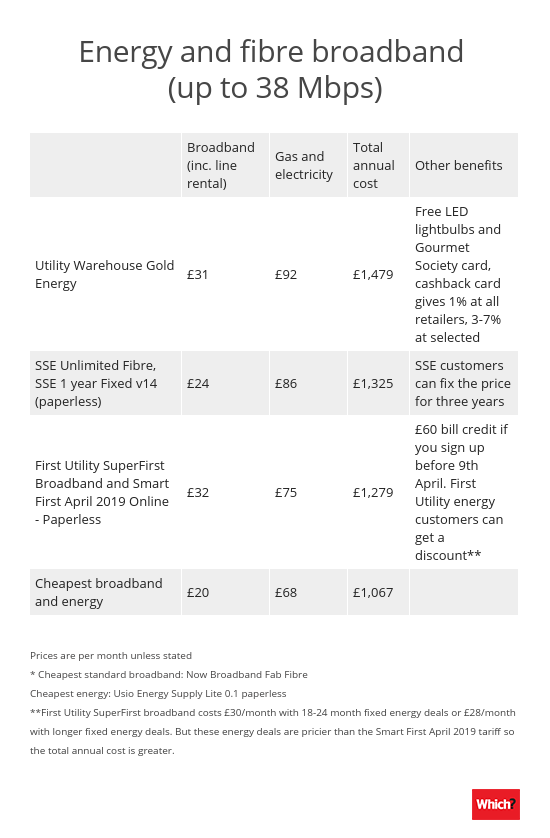 Find out what Utility Warehouse’s customers really think of it. We reveal the best (and worst) broadband providers.

Up to 76Mbps fibre broadband 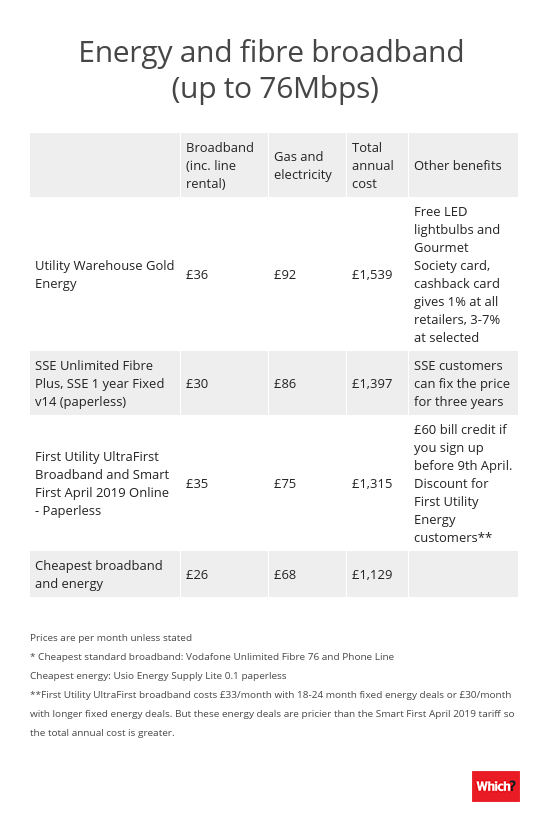 Utility Warehouse was the top-scoring firm in our energy companies survey. Find out how your energy firm did – see our full Which? energy survey results. 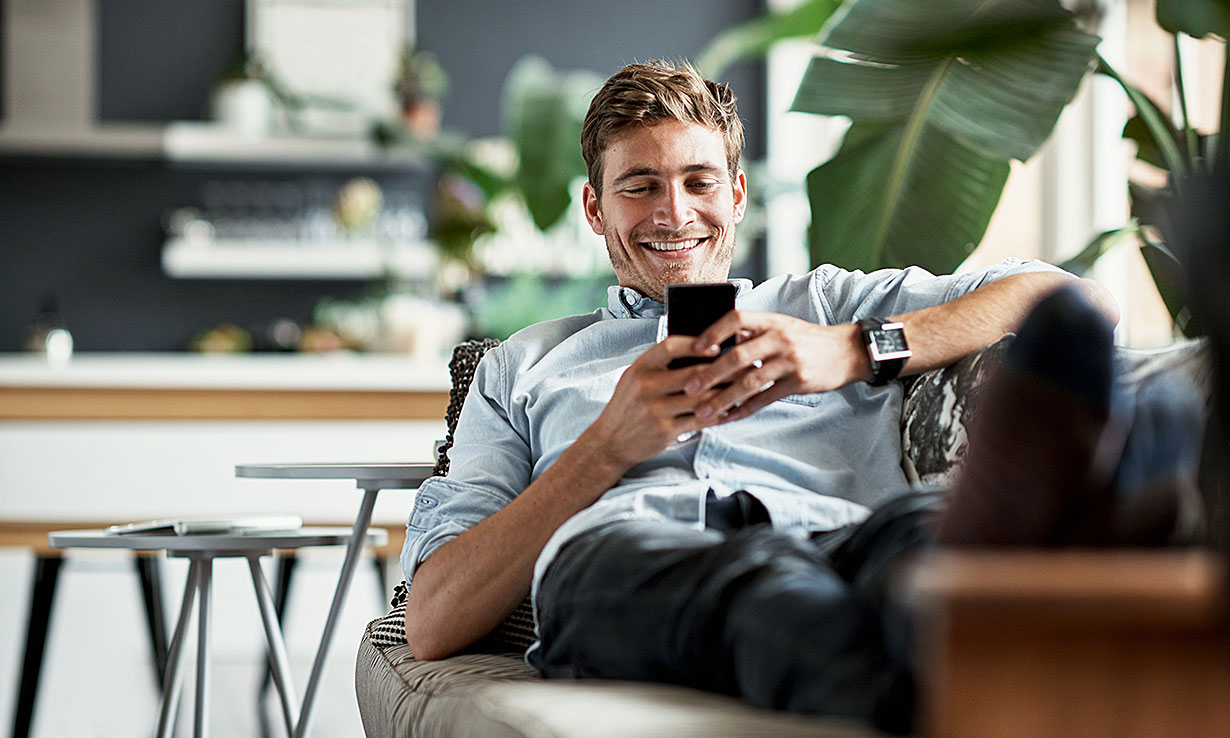 But you’ll still be better off (by around £97 per year) buying energy and an equivalent mobile phone package from two different firms. 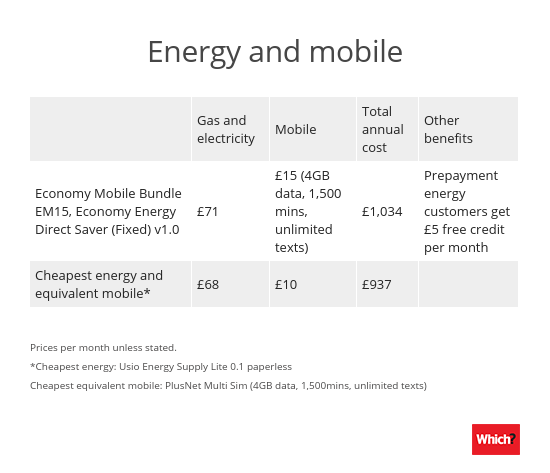 Economy Energy finished 28 out of 31 energy firms in our survey. Find out how to choose the best energy company. 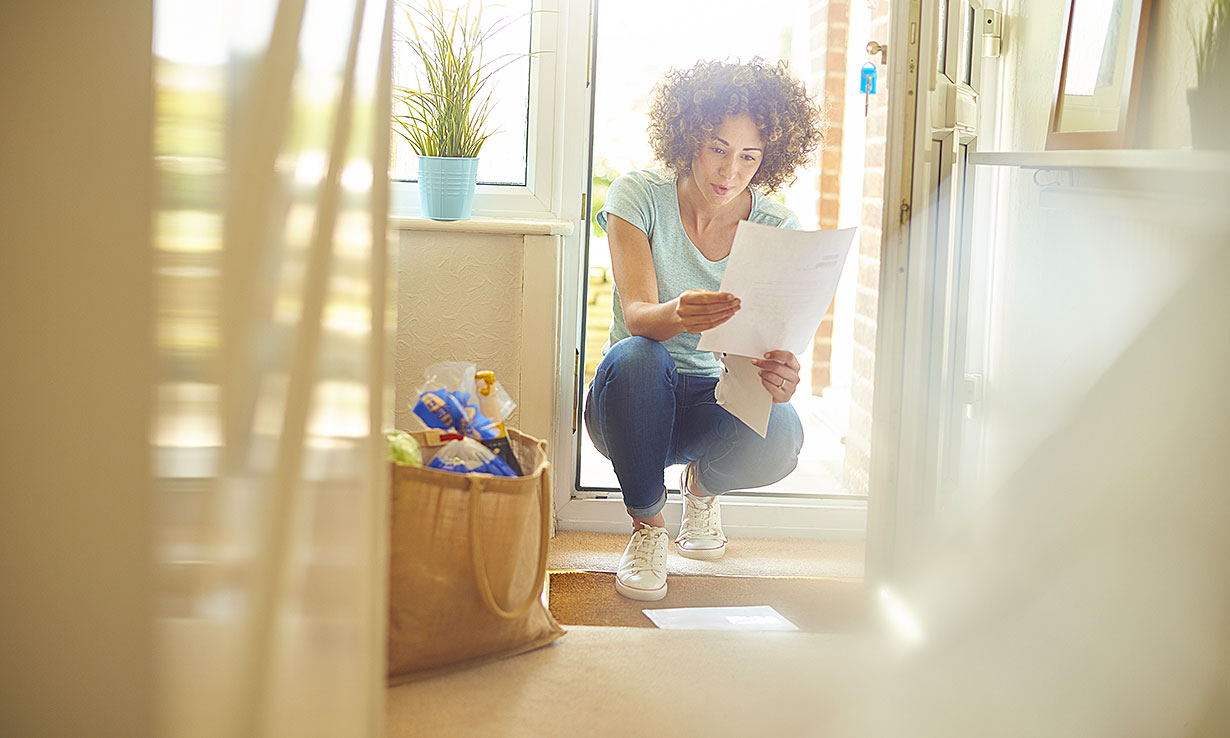 We chose standard broadband and a mobile phone plan including 5GB data, 1,800 minutes and unlimited texts. Per year, this will set you back around £1,539.

Buy these three separately, and you’ll save £324 for the hassle over a year. The table below reveals how. Scroll down to see our verdicts on the companies. 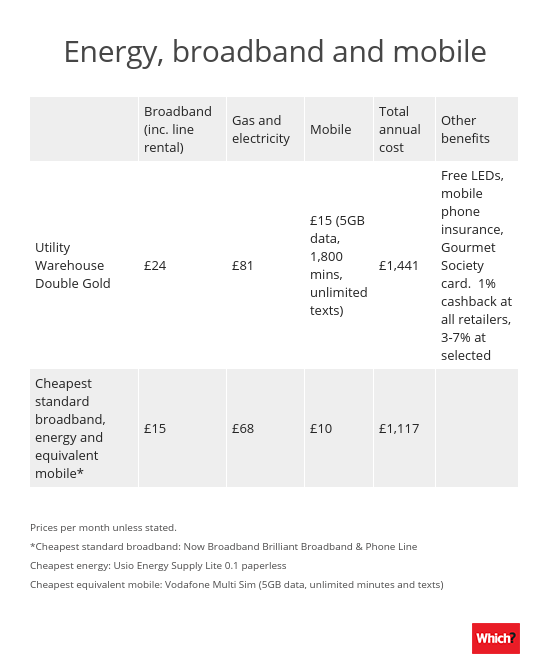 Discover which company’s customers rated it the best mobile network.

Energy prices are from Energylinx, based on a medium energy user (using Ofgem averages of 3,100kWh electricity and 12,000kWh gas per year), paying by direct debit with paperless bills. Prices are for deals currently available for a London postcode and correct on 26 March 2018.

Broadband prices are from First Utility, SSE, Utility Warehouse and uSwitch, based on advertised speeds of up to 17Mbps, 38Mbps and 76Mbps as appropriate for a London postcode. Set up costs and activation fees excluded. Prices collected on 26 March 2018.

Mobile prices are from Economy Mobile, Utility Warehouse and uSwitch and compared based primarily on GB of data included. Prices collected on 26 March 2018.

Prices are rounded to the nearest whole pound.