The Foreign Office (FCO) has banned all but essential international travel from the UK, but airlines are refusing to pay cash refunds to passengers who don’t fly, if their flights still operate.

Major airlines including British Airways, Ryanair and easyJet have drastically reduced their schedules, cancelling huge numbers of flights. Some services have remained to allow people to fly home, and for other essential travel.

Unfortunately, for those holidaymakers who booked tickets on these flights weeks or months before the coronavirus crisis began, and now don’t want to travel, the airlines are still refusing to let them cancel and claim a refund. That’s despite the fact any travel would be against government advice, invalidate travel insurance and that many countries now ban entry to UK residents.

Airlines are legally only obliged to refund passengers on a cancelled flight. Instead, passengers have been told to rebook or accept a voucher for the face value of the flight. But as customers are unable to predict when this crisis will end, or which airlines will weather the storm, they are reluctant to accept either.

In the worst example we’ve seen, Wizz Air is still charging €30-€40 per passenger, per flight, to rebook, or €60 to cancel, even to countries that have closed their borders.

Customers who cancel without a refund can attempt to recoup their losses via their travel insurance, but whether they are successful depends on the terms of their policy.

Make sure you keep up-to-date with everything you need to know in our coronavirus Q&A for travellers.

Up to €40 to rebook a Wizz Air flight

UK citizens are currently unable to enter Hungary or Bulgaria, but Wizz Air’s flights to Budapest and Sofia are still running.

Hannah Walsh was due to fly to Budapest with Wizz Air UK on Tuesday. The budget airline has suspended some flight routes so she expected to receive notice that her flight had been cancelled.

Instead, she was shocked to receive an email about her upcoming flight, encouraging her to arrive at London Luton Airport in plenty of time. Wizz Air UK was ‘expecting a very high number of passengers’ it said. She is not a Hungarian citizen so would potentially have been stranded at the airport, had she flown. 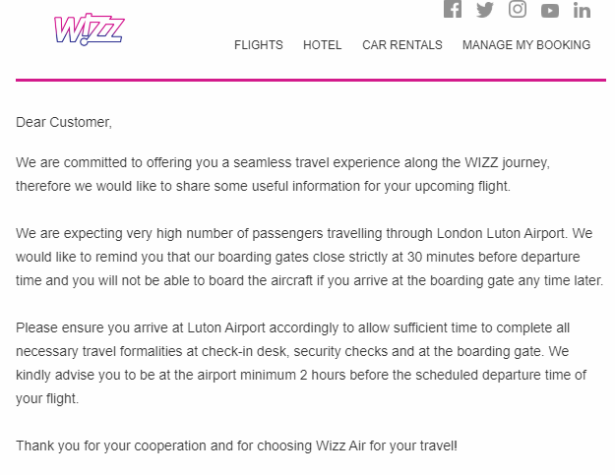 For Hannah, who spent £62 in total for two passengers, her choice was either to pay Wizz Air UK’s flight cancellation or rebooking fees, or miss her flight. Any of these options would leave her out of pocket.

UPDATE: Having chosen not to travel, Hannah received the below email today (Thursday 26). A passenger on the flight she would have taken was diagnosed with coronavirus. ‘We would kindly ask you to contact your local health authority immediately’, it says. Wizz Air is still flying to Budapest and not offering refunds for those who follow FCO advice and do not travel.

Wizz Air told us ‘the wellbeing and safety of customers is Wizz Air’s number one priority’. 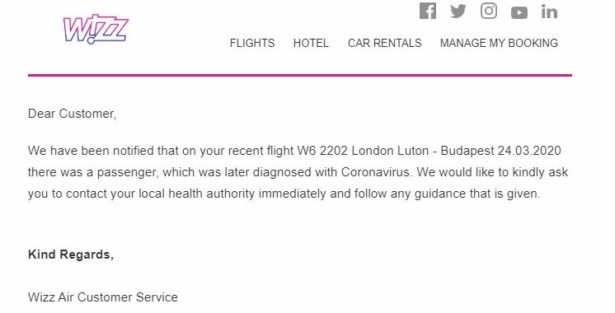 Industry sources told us that not letting passengers cancel or rebook flights without having to pay a fee was ‘unacceptable’.

Wizz Air has since told us that it: ‘is unable to offer refunds to passengers whose flights have not been cancelled’.

BA is still running a limited number of flights. In many cases this is to get stranded tourists home, such as the thousands still stranded in Spain.

One passenger, Lynette, told us on Twitter that as soon as the FCO released its guidance she contacted BA to cancel her return flights to Thailand, which cost £550.

Yet, because the flight was still running, BA would only offer a voucher for the value of the flight, which has to be used within a year, and not a full cash refund.

Lynette has since cancelled the flight anyway. She has received a refund of the air passenger duty element of her flight (£113) and is hoping to claim the balance from her travel insurance.

What about Ryanair and easyJet?

Ryanair will be running a severely reduced flight schedule from today (25 March) and EasyJet grounded the majority of its flights yesterday (24 March). Neither airline is offering cash refunds for flights that do operate.

To make matters worse, some Ryanair passengers who tried to rebook their flights found that ‘change fares’ are more expensive than a new ticket on the same flight. And scores of its passengers have been unable to make the refund system work.

Last week some Ryanair passengers were shocked to discover their flight was back on, after being told previously it had been cancelled. These customers, given as little as two hours’ notice to get to the airport, would also have been unable to claim a refund.

Passengers of both airlines have told us how difficult it is to contact customer services.

What can I do if my flight is still running?

Despite the FCO warning, airlines are not obliged to refund passengers. We have asked the Civil Aviation Authority for its view, but it has so far declined to comment.

Our advice is, if you can rebook without penalty, do so. Then rebook again, until one of the rebookings is cancelled. If your flight is cancelled by the airline, you will be entitled to a refund.

If that fails you may be able to get a refund through your travel insurance.